Pico’s Bakery, 5710A Bellaire, in the same center with Sabor and the former Alebrije

I should probably write a full review of Pico’s but it’s already been covered by so many other bloggers and the newspapers that I feel I’d just be redundant. It’s a big treat though and if you’re familiar with Pico’s Mex-Mex down the street you should give this place a try.

I wasn’t that impressed with the Torta de Pierna I tried on my first visit (the fixings were kind of skimpy and the roll too large) but everything else I’ve had here has been excellent. One of my favorite things is the Chilorio Foot Long burrito; at only $2.25 their foot long burritos are a bargain. I’d never had Chilorio at the restaurant before and I’m kicking myself for that. I’ve also tried the Crazy Bill’s Breakfast taco. It’s an oversized tortilla and the sign says ‘don’t ask’ what’s in it but I believe it had eggs, cheese, tomato, potato, salchicha, chorizo, and a nice level of heat. If it had only had bacon it would have been perfect.


The baked goods are awesome, even better than El Bolillo I think, and I particularly appreciate that they’re labeled in the display cases. The Tres Leches is very good; moister and more dairy flavor than I believe I’ve ever had in a Tres Leches and they don’t rely on a surfeit of sugary icing for the appeal which resides in the cake itself.

I’ve also tried the tamales, $4.95 for a half dozen, chicken or pork; they’ve just recently added larger, banana-leaf wrapped tamales, also, for $1.95 each.

They serve Katz coffee and carry a small selection of Katz beans. The cookies are also excellent.

I happened across this place on a blisteringly hot day and went in for some refreshment. It’s a very new place in a new strip center. It looks a lot like it might be a franchise outlet but they didn’t even have printed business cards or menus, much less a website.

They had about 2 dozen flavors of ice cream. I sampled several before settling on Nuez y Cajeta which they translated as Butter Pecan with Caramel. It didn’t have as much butter fat or pecans as Hank’s famous Butter Pecan and was very, very sweet but was good. They also have paletas and fruit cups.

Although they didn’t have a printed menu I did pick up a flyer that lists Nachos, Frito Pie, Elotes, Raspas, Cocktel de Frutas and Chicharron Preparados.

I was like a kid in an ice cream parlor (duh) and didn’t think to ask whether they make their own ice cream or not.

I’ve seen this Salvadoran trailer many times in my trips to the south side and it’s usually doing a good business; I finally got around to stopping by recently. I had other plans for lunch so I just got one pupusa revuelta. It was done to a beautiful golden color on both sides and had more ‘crust’ than any pupusa I’ve ever had before, but the meat and cheese were minced and didn’t have a lot of flavor. The curtido was excellent, coarsely shredded cabbage the way I like it, very, very vinegary and with a surprising heat level. This was probably the spiciest curtido I’ve ever had at a Salvadoran place and the red sauce, which often times seems to be taken right out of a can of tomato sauce and unadulterated, likewise had some heat and a little chili flavoring. The menu on the side of the wagon was small and had several items I’d never seen before. I’ll probably stop back in to try more.

A note: Tacos Don Beto DF which I posted about in Quick Bites II has apparently moved on but there are a couple of new vendors along S. Post Oak, both named Sabrosos Tacos de Mexico DF. One is a truck park just a few doors from where Don Beto was located, in front of Variedades Sinai, a place which advertises pupusas, and a trailer parked at a Shell station about a quarter mile south of S. Main on S. Post Oak. I’ve discovered there is a commissary not far from the intersection of S. Post Oak and W. Orem where mobile food vendors go to restock and clean, etc. This may account for what seems a large number of mobile food vendors in the immediate vicinity, including dueling pollo asado wagons at the intersection of S. Post Oak and W. Orem, a pollo rostizado bus down near the Beltway, and at least one bbq truck. There used to be another Salvadoran trailer, also.


Tacos Garcia, a trailer on Bissonnet across from Sharpstown High School


THIS TRAILER HAS RECENTLY REAPPEARED AT THIS LOCATION AFTER BEING MISSING FOR SOME TIME.

Howard Rushing has posted about this place (and other finds on the SW side) on this thread on Roguefood and recently sent me some pictures, too. 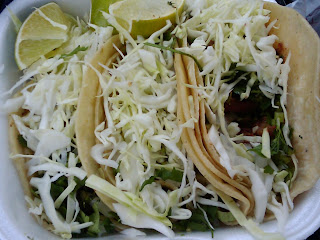 Howard says he likes the cabbage included on the tacos along with the onions and cilantro. I haven’t tried this yet but it looks good to me.

I appreciate Howard sharing his finds with me. He takes some very good pictures.
Posted by Bruce at 6:30 PM

I'm not over there all that often, but I found myself at Pico's bakery a few months ago after trying unsuccessfully to get some birria from a market down the street on a weekday. Based on one small experience with only their tacos, I thought it was a rip. The one caveat: I had high expectations as I've eaten at Pico's for years and heard a few good things about it.

I don't remember exactly, but I think I really liked the chicharrones and the cochinita was pretty good, though didn't taste at all like cochinita (more like soy sauce). The tinga and chilorio were both bland. I've since heard that the burritos are a deal, so I guess I'll go back?