There's a new po'boy shop in town and it's a good one. According to what they told reporters, the owners are from New Orleans; they settled in Hattiesburg after Katrina but decided they missed the big city and wound up here. We're fortunate to have them. 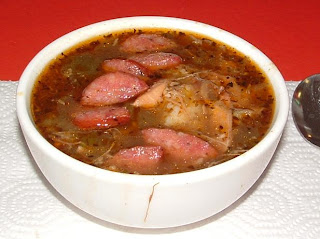 I've tried the lunch special, a generous cup of gumbo (close to 16 ozs worth) and a small sandwich for $10. The chicken and sausage gumbo is thin but very tasty and loaded with tender chunks of smoky sausage and white and dark meat chicken pieces; it's mildly spicy. 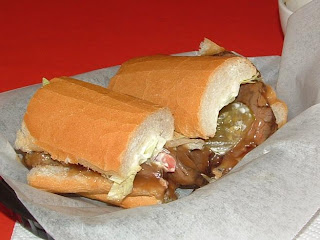 It was hard to pass up the assortment of seafood po'boys available (soft shelled crab, oyster, fried crawfish, shrimp, catfish - there are 13 po'boys on the menu in 4 sizes, including the 32" extra large plus buns) but I was drawn to the roast beef and I was not disappointed. A grievance of mine for a long time has been the bread used for po'boys by most places here and while BB's and Jazzie both have bread that is better than most I think Calliope outshines them both. There are hints that it's bread from the Leidenheimer Bakery in New Orleans, or at least a very near clone. It's nice and crusty but lighter than a baguette or bolillo, still much better than the usual sandwich roll served by many places, toasted or not.

Besides the roll, the beef, gravy and other condiments were all tasty and there was an appropriately generous amount of both the gravy and mayo (I believe the correct measurement of the latter is 'gobs'). This was the best New Orleans-style Roast Beef Po'Boy I've ever had in Houston.

The manager asked me, as I was finishing up, if it had been messy enough - the right question to be asked after a New Orleans Roast Beef Po'Boy. The pile of wadded up paper towels on my table told the tale.

The place was virtually deserted when I was there just after 1pm; perhaps the downtown lunch crowd has not discovered it yet. The staff was very friendly. Despite the Jefferson Street address of the shopping center the restaurant is hardly visible from Jefferson; it's actually closer to the intersection of Hutchins and the St. Joseph Parkway.

Just treated my self to a Mardi Gras lunch. The seafood gumbo I had was not brown enough and the roux wasn't quite soupy enough BUT it TASTED right, and in Houston, restaurants never get the flavor right. The soft shell crab po-boy was good, Dawlin'! The waitress and the lady who seemed to be the manager were super friendly. Try this place.