This Restaurant is Closed.


I was happy to discover this restaurant recently and have enjoyed a couple of visits in just the past week. This is my first experience of Afghan cuisine. So far as I know there is only one other Afghan restaurant in Houston and perhaps only one other in the entire state. On my first visit I went with a couple of appetizers in order to sample a couple of different dishes (there is no buffet or even a special lunch menu). 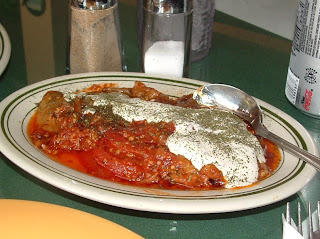 I had the Borani Badenjan, an eggplant dish with tomato, cayenne and garlic, topped with a yogurt sauce and herbs. The amount of heat was a pleasant surprise; it is not mentioned in the description of the dish on the menu. This was perhaps more tomato than eggplant and quite oily but very good. Is also available as a vegetarian entree.


I also had the Mantoo which some online sources describe as the Afghan version of ravioli - steamed dumplings stuffed with a mixture of minced beef and onions and spices, topped with a tomato and ground beef sauce with green onions and more of the yogurt and herbs. This is available as an entree, also, and was excellent. The dumplings, gathered or folded rather than pressed as best I could determine, are slightly chewy.

I understand the yogurt is homemade and it is very rich, more like Greek style, I think. 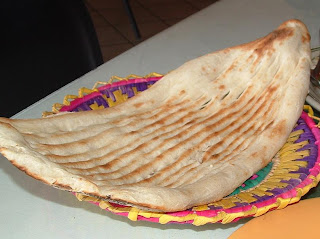 Afghan naan is extra ($1) and I thought on this visit what I got was re-warmed and perhaps not baked on premises.

On a second visit I went with the Quabili Pallow, the Afghan national dish, with long grain basmati rice topped with sauteed carrots, raisins and almonds, served with bone-in lamb shank. 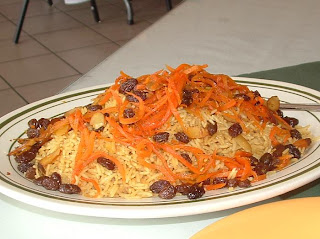 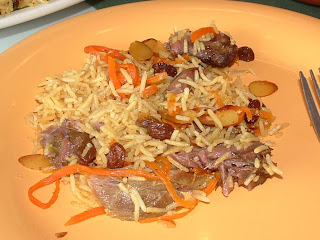 This was very, very good, the sweetness of the carrots and raisins contrasting with the nuttiness of the rice, the meaty flavoring of the rice and the crunchiness of the almonds. On the menu this is described as baked brown rice but I think this is one of several examples of problems in translation; as I understand it, this is dish gets it's coloration from the broth the rice and meat are baked in and this is not what we would consider brown rice.

On this occasion it was obvious the naan was freshly baked, so piping hot just out of the oven that I couldn't pick it up for several minutes.

Western style implements are provided or you can tear off a portion of the naan, use it to pinch off some of the meat, also gathering a pinch of the rice or anything else on the plate, and bring it to the mouth. A large spoon is provided with the entrees or appetizers to make it very easy to share either, transferring a portion to the individual plates that are provided.

I also sampled the dogh, a refreshing yogurt drink. I have been fond of what I have known as borani for years and make it often at home and this was the best version of a non-sweet yogurt drink I have encountered at a restaurant, even better than what I've made at home, with chunks of cucumber, minced onion, garlic, spices and pepper. There were so many chunks of vegetables attempting to drink this through the straw provided was frustrating and I finished the generous goblet off with the tablespoon. I've had doogh at one of our Persian restaurants before an found it unpleasantly over-carbonated. I understood dogh (or doogh or dough or dugh) is always carbonated, ideally naturally, but I detected none in this drink.

After just a couple of visits I've ranked this restaurant on a par with our very good Persian restaurants with which it shares some very similar dishes and put it into a league including them, Polonia, Cafe Pita + and a few others. I enjoyed the Quabili more than the lamb biryani I had once at Himalaya which otherwise I place a notch above these and I'm looking forward to more visits to see if that assessment holds up. It's certainly a welcome addition to the far west side-Fort Bend County-Sugar Land dining scene. Incidentally, I've read there is quite a Muslim community in Sugar Land and this whole corner bears that out; besides Afghan Cuisine, which claims to serve only Halal, there is an Indo/Pak grocery, a Halal butcher, Cafe Yasmeen, which is also Halal, and even the grill inside the Chevron station on the corner claims to be Halal.

The room is large and while not sumptuous is about on a par with rooms like Kasra and Cafe Caspian; there is a large TV on one end and you might want to avoid sitting close to that. The staff has been friendly.

Update: Recently I returned after an absence of several months. In the meantime, the reviewer for the Chronicle has given the restaurant a rave review, which I thoroughly think it deserves, and I was a little sad to see the place empty at 1pm; perhaps they do most of their business in the evening. My opinion of the food is still very high.

This time I tried the Aush soup and Bolani, two more appetizers. 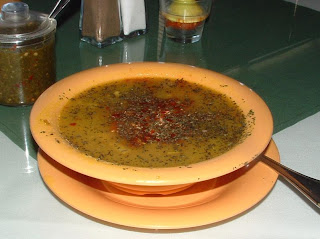 I expected a porridge like soup but this was a broth with noodles, ground beef and split chickpeas, plus a dollop of yogurt, some tomato sauce and the chutney seen in the dispenser. I also thought there were some cheese curds in there. There was a surprising level of heat coming from the chutney and perhaps some other spices. Some sources online describe this as a tomato soup but the tomato flavoring was not prominent in this dish. It was very good although perhaps over-herbed. 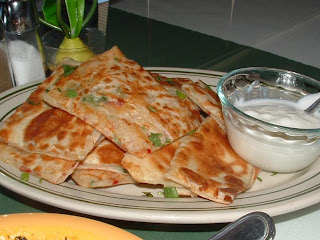 The menu refers to Bolani as the Afghan version of calzone but I get more of a comparison to a filled roti of India such as Pooran Poli. The filling is potato and leek with cilantro and I think green onion. The Chronicle reviewer wrote that to compare these to calzone is to be very kind to calzone! I wouldn't go that far but this was immensely satisfying; I could have noshed on these all afternoon. They were slightly flaky, pliable rather than crisp as I had expected them to be. I would top one of the pieces with a dollop of the restaurant's homemade yogurt and a teaspoon of the chutney for some impromptu Afghan nachos.

I was disappointed on this visit that they were unable to serve the dogh.

There is no website so I've scanned the to-go menu here. Prices and dishes may differ on the menu in use at the restaurant.
Posted by Bruce at 4:46 PM

Speaking of Halal, I noticed that the chicken place inside the gas station at West Bellfort and 59 now serves Halal Chicken.

?? That Krispy Krunchy place ?? - I tried the chicken there once; it had been under the heat lamp way too long (and the tacos fixings looked similarly time worn).

I know the Houston Kashruth Association provides a list of certified Kosher restaurants, butchers, bakers, etc. I wonder if there is such a list for Halal?

All I have found is zabihah.com which offers comments such as 'verbal assurance of staff' and 'owners are known Muslims.' Only a few listings have 'Halal certificate on display.'

Next time I'm in the mood for a burger, I'm thinking I may try the Halal burger and fries at Cafe Yasmeen (they have a banner in the window).

Bruce, do not, I repeat, do not try the burger there. They bragged on it the second time I went there so the third time I tried it. Dry, dense institutional patty that I think was nuked because it did not have a grilled flavor like their kabobs. It made a Regal Ranch burger look good, if you remember them. I almost took it back it was so bad. Unless it was their bid to get rid of a gringo, I would pass on the burger and stick to the rest of the menu.

I'll never understand the resto business. Why brag on something mediocre? Thanks for the tip; I think I'll skip Cafe Yasmeen entirely.

I MUCH prefer the chicken curry at Hwy 6 than the Saffron Kabob place; much richer & complex. I'm not as keen on some of the other dishes but really like this one!! They've cut back a little like many restaurants, hurting in this cut-back economy, doesn't stop me from going. Usually when I go in, I'm one of very few lunchtime customers. Don't go to the horrible place nearby on the SW corner of intersection... one of the worst meals ever there last fall!