It's hard to believe, all the years I've lived in Houston and all the times I've gone to the Village to eat, I'd never been to Pasha until this summer. I'm not sure I even knew it existed until a couple of years ago, it's kind of easy to miss. For years, my go-to places in the Village were Alfred's/Kahn's and Antone's, later joined by Istanbul Grill. There were other places I ate at, uh, what were they now?, but these were overwhelmingly my favorites. And let me pause to make the point that to me, the neighborhood will always be 'The Village,' as it was referred to when I was a kid growing up. I don't know when Rice bought the naming rights but to me, it'll always be The Village, not Rice Village.

But I did learn of Pasha a couple of years ago, with some good recommendations, and set out to correct the error of my ways this summer when I took a break from focusing on street food. 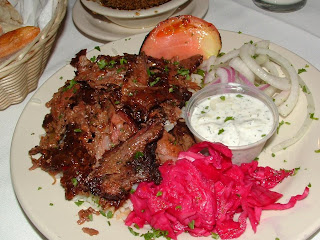 I hadn't visited one of our Turkish restaurants in a couple of years when I first stopped in and I was hungry for doner. This was the lunch special portion preceded by a Shepherd salad, seasoned and marinated thin slices of beef and lamb, cooked on a rotisserie, some pieces still pink in the center, juicy and lusciously flavorful, and a very generous portion for a lunch special. It was better than I remembered ever having elsewhere.

Pasha is quite a different space than Istanbul just around the corner; quiet and peaceful, a respite from the bustle outside, linen table cloths and stemmed glassware, but not at all stuffy, at least not when I was there for lunch several times.

In the dim light of the restaurant, I couldn't decide what the item at the top of the plate was; I didn't remember mention of potato and there was a bed of rice underneath the pile of meat, anyway, but a wedge of potato dusted generously with paprika or something similar is what I guessed. The light from the flash makes it more readily identifiable but it was not until I cut into it that I realized it was a wedge of tomato. It tasted as much like a tomato as it looked like a tomato and was a waste of space on the plate and the complimentary basket of pide had been at room temp and a little stale but otherwise this was an excellent meal and I kicked myself for waiting so long to come here. Then they brought out the complimentary shot of hot Turkish tea and I sat and sipped and savored for another 20 minutes or so, a blissful few moments of repose from the blazing sunlight and busy-ness outside. Do you get the idea I like this place? 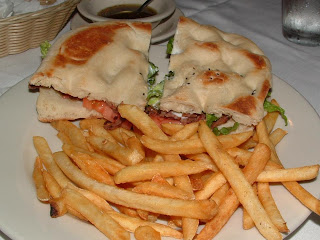 Only a few days later, back in that part of town and craving some more doner but also wanting to try something different I went back and decided I could fulfill both desires by ordering a doner sandwich. On this occasion (and every other I've been) the complimentary pide was warm and wonderful but I discovered it doesn't make for a very good sandwich. The pide at Pasha is too rigid and impermeable, the small pieces of meat and other ingredients kept falling out because the bread was so rigid. Worst of all, one of the real joys of the first meal had been that bed of rice underneath the meat that had soaked up all the juices and which I lingered over down to the very last grain; the bread simply doesn't soak it up like that and remains rather dry.

Now about those fries. You have a choice of three sides, Shepherd salad, fries, or cup of soup of the day. Given my disdain for fries - I usually eat them only when they're automatically included with a sandwich or something - I decided to go with them since I'd already had the salad and soup wasn't appealing on another sweltering day, but it was a bad choice. They were mediocre, probably frozen. They were accompanied by an enormous squeeze bottle of ketchup, one of the few food substances on earth I avoid more than fries, that was plopped down on the table with what seemed like a sneer. This wasn't anywhere near as satisfying a meal, and I didn't get the complementary tea, either. I don't advise the sandwiches at Pasha, stick with the plates. I did manage to salvage a little more from this experience - I discovered that drizzling what I had left of the zataar that accompanies the complementary pide classed up those fries enough to make them more palatable, more palatable to me than the ketchup would have (the squeeze bottle remained untouched). 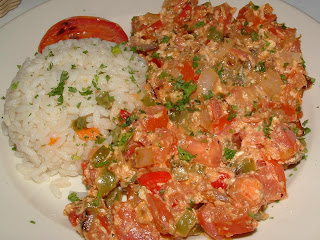 Live and Learn being the order of the day I couldn't wait to come back so a few weeks later I stopped in again. I'd been eating some very big meals at other sit-down venues and wanted something a little light so I went with Menemem, a traditional vegetarian dish. Several cuisines have dishes involving eggs and vegetables and this is the Turkish version and it was great, tomato, onion, bell pepper, eggs and feta, served with Turkish rice. I particularly liked that the vegetables were still crisp-tender instead of being cooked to a soft, mushy state and I was every bit as enthused about this dish as I had been about the doner on my first visit. The rice was great too and I finished off every last grain even though it had not benefited from any meat juices; I grew up in Brazoria County where they grow, or used to anyway, a lot of rice and I love rice in almost any presentation, more than potatoes.

And on this occasion the grilled tomato both looked and tasted a lot more like a tomato should. 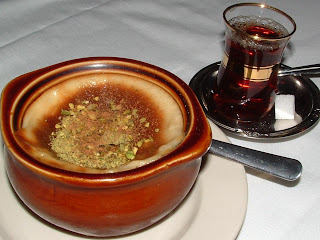 This meal was so light I followed with a dessert, something my rather small appetite usually doesn't allow room for. I went with the Sutlac, a baked rice pudding, served chilled topped with minced pistachios. As smooth as flan though not as creamy, I loved this also, plus I got my shot of hot tea to sip.

I haven't hit it for dinner when things might be a bit more formal but Pasha is a great lunch spot and judging by the pictures on the website, there are lots of great dishes yet to try.