This place used to be Super Pita before a change of ownership in May. I thought they were out of business once when I drove by because the windows were so barren but lately there's almost always a crowd. A young waiter told me they spruced the place up a bit and the food is much better. I only went to Super Pita twice and tried something on the steam table. It wasn't too bad but not memorable either. Now the steam table appears to be gone, at least at lunch, and food is freshly prepared. That's a plus. I got the impression from the take-out menu that the emphasis is on sandwiches although it's still possible to get most of the dishes that were available before off the menu and about half the dine-in customers have been having plates.


Sandwiches come on baguettes, pitas or laffas, all baked in-house, with typical Middle Eastern fillings such as falafel, schawarma, kabobs, etc., plus schnitzel. There are also some 'Gold' sandwiches with typical Western deli fillings like roast beef, smoked turkey, salami, etc. I tried a falafel pita on my first visit. When the falafel had been cooked (5 pieces) I was called up to the counter to pick my toppings. There are about 15 to choose from, none labeled. The edge of the pita is cut and folded back and the fillings stuffed inside. The man said 'Hummus?' and I said yes. 'Anything else - Israeli salad?' I said yes. 'Anything else?' 'Tabouli' I said. 'Anything else?' I saw a green sauce that I guessed might be spicy and pointed at that. Spicy? he said. Yes. 'Anything else?' Then there was the red sauce. 'Spicy?' I said yes. I was beginning to feel a little guilty about loading up so much but he kept saying 'anything else?' I think I stopped at that point, I'm not sure, maybe I got one or two other things. I think the red and green sauces were the Yemeni condiment schug. Those were listed by name on the Super Pita menu and though they're not listed on this one there have been so few changes in the menu I'm guessing that's what they are.

Well the truth is I'm not very fond of pitas or falafel to begin with but I had just been to Zabak's a few days earlier and I thought it would be good to do a comparison. The pitas are thick and hearty and a bit dry for my taste; the falafel was, well, falafel, and no, not as interesting as Zabak's. With all the added condiments, though, it was not bad as a sandwich and I was pretty confident they had offerings I would like better. I had got too many condiments and couldn't sort them all out, taste-wise.

Looking over the menu I became fascinated by the laffa sandwiches. They had been on the Super Pita menu but I'd never noticed them and I resolved to try one on my next visit to see if I like laffa better than pita. Laffa is an Iraqi flatbread that is more like a thin naan or thick chapati rather than a pita; too thin to be used as a pocket bread it's used as a wrap. 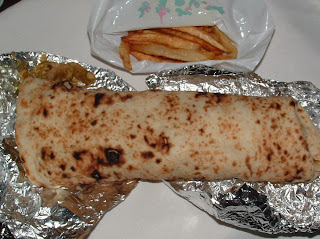 I also wanted to try the shawarma so on another visit I got a shawarma laffa; this time I added just the hummus, Israeli salad and some grilled eggplant. Laffa are about 10" in diameter and weigh from 3 to 5 ozs (hand-made and irregular); the filled sandwich weighed in at 15.5 oz on my kitchen scale and I loved it. The laffa is like a soft, pliable naan and is just what I need - another type of bread I like. I could gritch that the shawarma was a little too dried out and the eggplant added a bitterness than was unwelcome but this was a very good sandwich - actually, big enough for two sandwiches ($10.95) - and a new favorite sandwich. The fries this time were a little underdone.

Okay, so the resemblance of a laffa to a large flour tortilla and the sandwich to a burrito can't be overlooked but there's no lard, obviously, and where else in Houston can you get a Kosher falafel or schnitzel burrito?

Like other Israeli restaurants, Super Pita at this location before and Saba's on Fondren, the menu includes dishes brought to Israel from other countries. Besides the laffa there is sabich from Iraq, a Morrocan style fish dish, a Tunisian style tuna sandwich on the breakfast menu, a Bukharian pilaf, a goulash and a couscous. I was fascinated by the Egyptian dish Foul Mudammas which dates back to the Pharaohs. It's served here as mashed fava beans on top of a bed of hummus in a bowl, topped with the green spicy sauce and accompanied by a couple of pitas. Though it's offered as a side ($4.95) it's enough for a meal in itself, though I prefer it a little spicier, with some cumin or chili powder and a hard boiled egg.

The grocery shelves and bakery display cases are less impressively full than when it was Super Pita but sitting in bakery section, waiting for my Foul Mudammas, the aroma of the fresh challah and pastries being brought out was driving me crazy. I picked up some laffa - three loaves are $2.50. Heated up in every home-maker's modern home substitute for a tandoor, a toaster oven (or in my case, a pop-up toaster) it crisps up a bit and makes a great accompaniment to many dishes.

This little neighborhood in Meyerland has a collection of some good eateries - New York Coffee Shop and New York Bagel Shop just a block away, The Russian General Store a couple of blocks away and Fioza, which is highly recommended by Ziggy Smogdust, just across Brays Bayou.

My Pita is kosher and closes for all Jewish holy days.

UPDATE:  MY PITA HAS UNDERGONE SEVERAL CHANGES OF OWNERSHIP I THINK.

THEIR BAKED GOODS, INCLUDING PITA AND LAFFA, ARE AVAILABLE NEARBY AT THE RUSSIAN GENERAL STORE AND BELDEN'S SUPERMARKET; I'VE SEEN THEM AT CENTRAL MARKET AND AT AL NIMER SUPERMARKET AND ROASTERY AND AT JERUSALEM HALAL MEATS ON HILLCROFT.

Their breads are also available at the HEB at Chimney Rock and Braeswood.