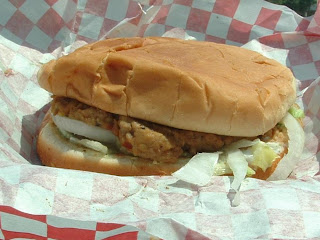 I first encountered the bun kabab at the snack bar at Dilpasand Mithai on Hillcroft a year and a half ago. On one of my visits there to try the barfees I ordered one, not having any idea what I was going to be getting. After eating one the concept was not much clearer. It was a vegetable patty, seemed to be mostly mashed potato, on a hamburger bun, with onion and shredded lettuce, black pepper, maybe some garlic powder, and lots of ketchup. I had asked for one 'spicy' but the predominant flavor I got was ketchup.

Since then I've learned the bun kabab is a very popular snack in Pakistan and it occurred to me maybe I had just gotten a less than primo example of one. Since then I had ordered one at another Indo-Pak snack bar on Highway 6 but though it was on the menu board, they no longer served it. Then when I discovered the second location of Dilpasand Mithai recently and saw it on the menu, I went for it.

It proved to be a good choice. Delivered piping hot from the kitchen and with lots of heat, it was a perfect light snack for a hot summer afternoon, tasty and filling without being too heavy; there was only a very modest amount of ketchup.

I had been strolling through the Desi Food Warehouse in the same shopping center and didn't have my camera with me so was unable to take a shot but a couple of weeks later, back out on that side of town and craving something light to eat, - okay, I wanted another bun kabab - I stopped in again. Ramadan was underway and the restaurant was not serving any food to eat on premises but fixed one to go (the kitchen staff is Mexican, I believe), so I retreated to my car in the parking lot and took the picture above.

The ones I had previously were on the smaller 4" buns but this one used the larger sized bun and was a lot more filling and not quite as spicy but very good. The resemblance to a Whataburger is obvious; change out that checked wrapping paper for mustard colored and you could probably fool a lot of people - until they bit into it. This is not a mashed potato fritter, just mashed potatoes (maybe some mashed lentils, maybe onions, I think).

This has become something of a minor obsession for me, just what I need to help me get through the (hopefully) last few weeks of sweltering summer when I'm not eating much more than sandwiches and snacks. I happened to remember that Salaam Namaste, a Desi game room and Indo-Pak fast food place on W. Bellfort, just off 59, had bun kabab on the menu and I stopped in to try it, only to discover they have three - a meat bun kabab, a 'special,' which includes egg, and a vegi kabab. What is this I wondered? I was directed through a door to the sister restaurant, Sweet 'n Namkin, for the vegi bun kabob. These two restaurants have totally separate kitchens, both 100% Halal, with Sweet 'n Namkin also 100% vegetarian. 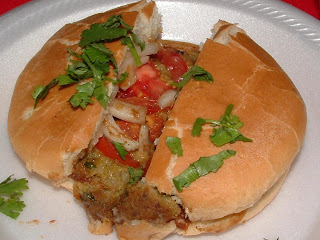 This was another good one; the patty had been sauteed just a little I think and browned up a bit and included small chunks of onion and lentil and perhaps some other vegetables. There were some thick slices of roma tomato and only a dollop of ketchup (more was offered on the side), and a generous amount of raw onion and cilantro. It wasn't quite a spicy as the one at Dilpasand but was very satisfying.

I went back online to do some more research and discovered something I had totally missed before, the meat and egg combination is the most popular variety in Pakistan; I thought this was just supposed to be a veggie snack.

So of course I had to go back to try the 'Special' at Salaam Namaste.' What I got was the least photogenic of any I've had so I didn't take a picture but it turned out to be the best. A thinner patty of veggies, topped with a thin 'omelet' folded over multiple times, with onion, roma tomato and cucumber slices and lots of cilantro, the spiciest one yet, too, and on top of that, a shaker of spice on the table (including at the least cumin and tumeric) that kicked it up even more.

So I've still got to try the beef bun kabab at Salaam Namaste. A Beef Kabab Roll or Chicken Kabab Roll is common as a snack food offering on Pakistani menus here, but not the Bun Kabab. I've checked at Alfa Capri, another Desi game room/snack bar just a few doors down on West Bellfort, and they don't serve a bun kabab and I've checked the menus of several other Pakistani restaurants and haven't found another one to try so the quest goes on but may be over already, too.

In the meantime I had come across this Pakistani blog comparing the bun kabab to McDonald's and coming down squarely in favor of the bun kabab. I don't know how authentic the McDonald's burgers are they're getting from those kiosks pictured in Karachi but I'll have to join the chorus of comments: I'd rather have one of these, too.

My earlier report on Dilpasand Mithai.

Salaam Namaste. I have been going to this restaurant off and on for several years but not much in a couple of years; it's undergone a renovation of sorts and there's more emphasis on the food and less on the game room aspect now.

My earlier report on Sweet n' Namkin which is undergoing a maker-over of it's own, becoming more of a vegetarian restaurant and less of just a chaat and sweets bar.

Oh yeah, and another good thing about these? So far, no one has asked me if I wanted fries with one or wanted to SuperSize it.
Posted by Bruce at 10:05 PM