I loved this restaurant before I ever got to the door. Just the aromas wafting across the parking lot convinced me I was in for something good. It's a small place, seating only twice as many as the legendary Tex-Chick in the Montrose, and kind of cramped at that. The way the menu is set up is a bit confusing, too. Basically it's a la carte ordering but not everything available is listed and perhaps most perplexing, main courses are cheaper than sides sometimes. Don't fret, the counter person will help, making suggestions for things to try if you're new.


On my first visit I tried the pasteles, a Puerto Rican tamale of sorts (there are Puerto Rican tamales) but made with mashed plantain or green banana instead of masa and with a filling of savory pork, steamed in a banana leaf. The melding of fruit and savory was a bit odd to the palate at first but it was very good. I also got a portion of 'yellow rice,' which apparently means arroz con gandules here. This was awesome, one of the most flavorful rice dishes I've ever had, rivaling the best rice dishes at our Persian or Afghani restaurants. There are apparently three sides available to choose from, white or yellow rice and .... plain beans? There isn't a clear listing of what the sides to choose from on the menu.

As I waited a brief time for my food, I observed a couple of women at the next table having a feast, the table loaded down with great looking dishes, only one of which, tostones, I could identify. I really wanted to be nosy and ask what everything was. 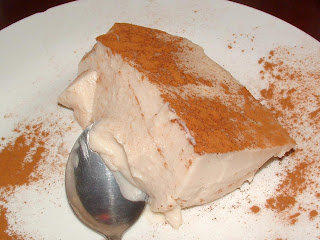 That was a half portion of the yellow rice ($3) and I was still a bit hungry so I inquired about desserts. There are only two available, not shown on the menu board or menu; one I have forgotten but the other was 'coconut pudding.' That sounded like just the ticket.

Although the word was not mentioned I believe this is the dessert known as Tembleque, served chilled with a generous dusting of warm cinnamon. I had asked for a small portion; that was said to be a half portion ($4).


On another visit I went for the Pernil ($2) and yellow rice, a double portion ($5). The aroma of the roasted pig filled the small restaurant as the server removed the holding pan cover and I made my way over to the counter to marvel as he peeled back the layer of skin and fat covering the pan and forked out portions of the meat, no knife needed. Some dishes are held on a steam table and there are also readily visible pots of food simmering on a stove behind the counter. This looked like it was going to be awesome. An online source says Puerto Ricans like their meats fatty; that's pretty easy to see. I included pictures from two perspectives because I couldn't really capture just how much food that was nor how good it looked with just one. Unfortunately, somehow, though the pan was covered and the meat simmering in its own juices and covered by the layer of skin, it was tough and stringy, a major disappointment.

It is easier to tell from this photo, by the way, that the 'yellow rice' is arroz con gandules because of the visible bits of meat included.

As I had been paying for my meal on my first visit the cashier had asked where I was from and I had replied 'just a couple of miles from here.' The significance of that question didn't hit me until later.

On my second visit a woman was busing some tables who looked familiar to me and she recognized me from my first visit and asked if I had been there before, pointing to the exact spot I had been sitting. She observed I had appeared to be really hungry and really enjoying the food; I guess I made something of a spectacle of myself. She was one of the women sitting at the table next to mine whose bounteous spread I had envied. She asked me where I was from. I said Houston and asked where she was from; she said New York. Then I told her what she and her friend had been having had looked very good and asked what it was. The only dish she named was, I thought, Catfish Stew. Puerto Rican Catfish Stew sounded awesome but I couldn't find it on the menu; I think probably what she had said was Codfish stew, i.e., the bacalao guisada, and I misunderstood. Whatever it was, it looked good.

One of the offerings not listed on the menu, although there is a picture, is the Jibarito, the Puerto Rican version of a steak sandwich using mashed, fried plantain in place of bread. It's listed on the menu board as $7 but I was told it is now $9.