THIS LOCATION IS NOW CLOSED. I BELIEVE THEY HAVE A NEW LOCATION IN KATY. 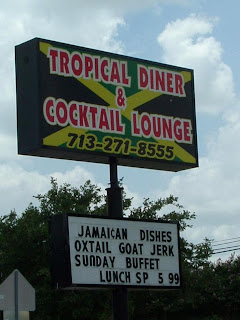 I first went to this place about 10 months ago, a couple of months after they took over the space from the short-lived 3Ps Barbecue. At that time they had a daily lunch buffet plus menu service and a cocktail bar. The buffet was rather small and there were no jerk items on the day I went in.


I had some Brown Stew Chicken, a stewed dumpling that seemed to have been stewed with bananas or plantains (which I didn't get any of), sauteed plantain, meatballs, rice and peas and a cabbage dish. There was a soup which as i recall was chicken. I like dumplings but this one was very gummy, otherwise everything was okay but nothing stood out and nothing (excepting that scotch bonnet) was very spicy, which I, rightly or wrongly, associate with Jamaican food. Nothing was labeled on the buffet but a server had identified the dishes for me. There were also several pans on the steam table with nothing in them and I judged that perhaps they didn't quite have their act together yet and have put off going back for many months. 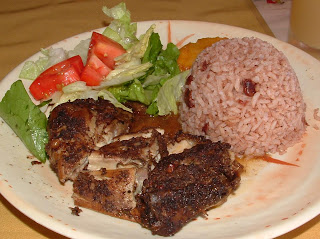 I'd noticed they're doing better business than 3Ps and I recently stopped in to give them another try; I'm glad I didn't write them off completely. Gone is the daily lunch buffet and in its place is a lunch special menu with prices ranging from $6.99 to $8.50. That includes a jerkwich served on coco bread and fish and chips ($8.50) which I'm going to have to try. The regular menu includes small and large plate alternatives and includes fried chicken ($6.99 and $8.50) which I also want to try.

I chose the small jerk chicken plate on this visit ($7.25). This came with rice and peas, a salad and a single slice of sauteed plantain. The chicken was juicy and tender but at first I thought under-seasoned. However as I worked my way through the plate, the jerk seasoning asserted itself more and I wound up very satisfied with this dish. The salad ingredients were crisp and fresh (I could have had a dressing if I'd wanted it); the rice and peas were a little on the dry side (and with very few peas) and I sure could have used a bit larger portion of the plantain.

Among the beverages besides the usual soda, tea and coffee are tropical sodas, Ting and Ginger beer plus smoothies, Tropical Rhythm, a line of tropical juice drinks from Grace, and home-made carrot juice and ginger beer. I'd never had home-made ginger beer and decided to order that ($3.00 for a glass). Initially I was disappointed that it wasn't carbonated at all (nor fermented) but I really came to like it. I judged it was possibly sweetened with honey and the waitress said sometimes honey, sometimes cane sugar but she didn't know what had been used for that batch. It was rather murky (unfiltered) and got stronger toward the bottom of the glass. This is a strong drink you sip slowly. I thought I could feel the plaque being dissolved in my arteries just as I sat there and was disappointed when I got home and looked it up to discover that's not one of the claimed benefits of ginger. Maybe it was just the sugar high. 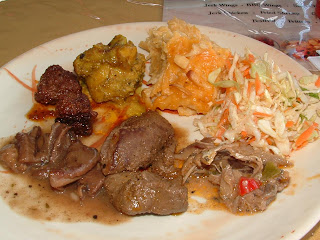 There is now a Sunday lunch buffet ($10) and I went back to check that out, planning to opt for something off the menu if the buffet didn't look very good but the buffet is all there is on Sunday (hours are also much shorter - 12N to 4pm only). The buffet looked pretty good and I decided to try it.

At 10 o'clock are some of the slightly sweet meatballs like I'd had before; at 11 is a green curry chicken dish. The baked macaroni and cheese at the top of the plate was one of a small number of non-meat dishes and was disappointingly dry (mac 'n cheese is not a favorite dish of mine anyway). The slaw was crisp, chilled, lightly dressed and only slightly sweet; I liked it a lot.

At 4 o'clock was the least appealing dish, salt mackerel. I wouldn't go for that again. I also got beef liver, which was excellent. The most interesting item on this plate, however, is the stewed beef tripe at 8 o'clock. I've never become a fan of menudo but have enjoyed tripe tacos, especially when extra crispy, but I loved this - it was my favorite thing on the plate, tender, only slightly chewy, very savory. One of the cooks who was doubling as a server (they seemed to be short-handed) said it's on the regular menu but I didn't get the name of the dish and I can't identify it on the take-out menu.

I also got a piece of jerk chicken which was not quite as juicy as what I'd had previously, and a piece of carrot cake. Besides what I sampled, the buffet included a tossed salad, rice and peas, the stewed dumplings and plantains, brown stew chicken, Sock-it-to-me cake, watermelon and cantaloupe wedges and, I think, one other beef dish. It was a more than adequate spread for me. 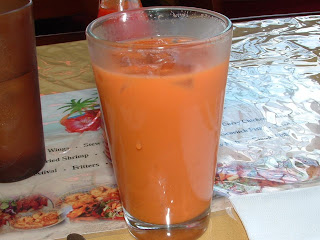 I tried the home-made carrot juice to accompany the buffet ($3.50). This was a sweet as a strawberry shake and not very carroty. I thought I had it figured out (carrots, honey, nutmeg and vanilla) but couldn't account for the color so I asked the chef who told me it had sweetened condensed milk in it rather than honey. A non-dairy version is available but not listed; ask for it if you're lactose intolerant. This also got more interestingly thicker toward the bottom of the glass; some people might not care for the slight graininess toward the bottom but it didn't bother me. This was good but I definitely prefer the home-made ginger beer.

They also have ready-made patties (beef, chicken, vegetable) and roti (your choice of filling).

They're open Monday thru Saturday 11a to 8p. The staff has been very hospitable. I overheard one diner thanking the chef for kicking up the spice level on his order and the chef saying they restrain the use of pepper since not all diners appreciate it but you can ask for spicier versions of the dishes.

This is a good addition to the SW Houston dining scene and I hope they make it.
Posted by Bruce at 6:13 AM