Once upon a time (recently) Ziggy Smogdust and I set out to visit Cafe Singapore on Bellaire but found it closed (Mondays). We studied the menu posted in the window and knew we had to come back and try it. In the meantime, we had both mused about spending some time working our way thru the restaurants in the 9800 block of Bellaire, just inside the Beltway. I've been to San Dong, Cafe Fu Fu, and Banana Leaf in there, Ziggy has been to Jang Guem and some others.

We drove back toward town and started strolling along the sidewalk in front of Fu Fu, QQ, and others, reading the menus posted in the windows. Many of the places were packed, a few were closed. Toward the back we came across Friend's Kitchen, a place which neither of us had ever heard of before. Ziggy saw something on the menu he was interested in, a cold appetizer of beef tendon. Sounded good to me; there were some available tables in the place which had a mixed but mostly Asian crowd. 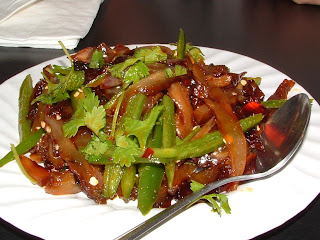 I had never heard of this before but Ziggy had been doing some research on it; it was excellent, with crispy vegetables, cilantro and Sichuan peppercorns. The tendon itself was tender, slightly chewy, and very tasty.

Thank goodness Ziggy was willing to share - I ordered the fried dumplings and shrimp and tofu off the lunch menu. I was very disappointed in both although I think Ziggy found the dumplings interesting - I thought they were not as good as I've had at Fu Fu and San Dong and perhaps were only the frozen pot stickers like you can buy at Sam's. We saw several good looking dishes being served to other customers, however, so I chalk it up to my poor ordering.

Revisit 5/11: I stopped by to get something to-go recently. The menu is still posted in the window like most of the restaurants in that strip so I looked it over before going in. The sign in the window still says Friend’s Kitchen but the business card and take-out menu call it My Friend’s Home Restaurant - Classic Home Style Chinese Cooking. The place was packed when I was there before but had only a few tables occupied this time and I was worried about maybe a change in ownership and decline in the food but they say the name actually hasn’t changed? 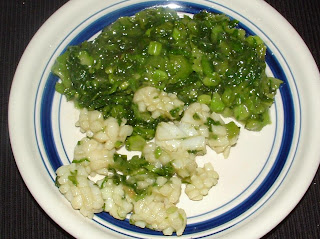 Anyway, there are some interesting, exotic dishes on the menu including Qingdao Seaweed Jelly, Wuhan Duck Neck and Cabbage with Jellyfish but I stuck with something more familiar, squid with mustard greens. As a lunch special this was only $4.95, a bargain, and was very good, not quite as good as the beef tendon had been but better than the other dishes I’ve had. The squid (the body, not the tentacles) was firm but not tough or chewy; the mustard greens, apparently pickled Chinese mustard greens, were very aromatic with lots of crisp diced stem pieces to contrast with the leaves. They were also very, very salty. I really liked this despite, or perhaps because of, the saltiness but I watch my salt intake and am not used to this much so I was guzzling water for 24 hours.

I will be back but I think I’ll stay away from dishes with Chinese mustard greens though I really love greens.

Belated Update: I realized I'd never added the following - I went back a week later as part of a tour I was doing, trying to find steamed soup dumplings. 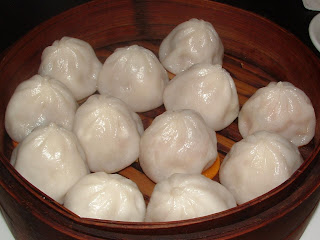 I really liked the ones I had here. The skin was a little thick but each dumpling was steamed atop a slice of carrot, adding both a new dimension of taste and texture that I found very likable.

The waitresses I have encountered on my several visits have all been very nice and there’s been no problem communicating because of a language barrier. B4 has this listed as Shandong Cuisine but there's a sign on the building that says Shanghai Cuisine and there's a story there, too. The restaurant at one time was called Shanghai Cuisine and is still listed that way on some restaurant review sites; Robb Walsh visited it in 2009 and said it was the first Chinese restaurant specializing in Shanghai cuisine in Houston at that time.

I've scanned the take-out menu here. Prices and Dishes may vary at the restaurant, of course.
Posted by Bruce at 11:29 PM