I've been seeing this restaurant when passing by on Bissonnet for months now but it never has registered with me. Recently on a wee hours insomniac's cruise I saw it again and finally remembered to look into it when I got home. When I realized it was Ethiopian I had to check it out.

It's a pretty new place, open only a few months. I like the room a lot. There's very limited seating - only 4 tables, 12 chairs, plus some stools at a counter. Unlike many small ethnic restaurants it's actually kind of roomy for such a small space. The table linens look like craft work instead of mass produced and the overall effect is peaceful, not what one would expect from the exterior of a cookie-cutter strip center in Southwest Houston.

I asked the waitress, who I think is also the owner, for a her best dish and she suggested the Kitfo (minced tenderloin of beef in spiced butter, the ubiquitous niter kebbeh of Ethiopian cuisine). I hadn't read up on Ethiopian in some time and didn't remember just what this dish is and misread the menu, thinking that by ordering it medium rare I was ordering it less cooked than it normally is served. Actually, this is the Ethiopian version of Steak Tartare and fortunately she seemed to have realized I didn't know what I was doing and the dish came out barely cooked at all, still very rare if not completely raw. It was accompanied by a small side of Iab (eyeb), a slightly sour Ethiopian cottage cheese made from buttermilk, and a small portion of Gomen (collards) and it was excellent. Having tasted the dish and observed the cleanliness of the restaurant I would have no qualms about ordering this raw next time.

At the end of the meal I had a cup of Ethiopian coffee. She doesn't do the coffee ceremony here but she does roast and grind her own beans and this too was excellent. Some years ago, having read about Ethiopian coffee, I bought some roasted beans myself and ground them at home for my coffee but it was nowhere near as good as this. I usually don't like sugar in my coffee but I understand Ethiopian coffee is typically consumed with lots of sugar or honey so I added a generous amount and it made it even better. I lingered over my cup for some time after the meal as customers tend to do here and walked out the door on a huge protein, caffeine and sugar high with expectations of returning very soon. 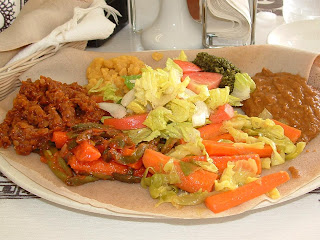 Actually I wound up going back the very next day. I had not been able to eat even half the Kitfo (you eat a lot of bread at an Ethiopian restaurant, of course). I had calculated from the portion I took home it was about a 12 ounce serving of tenderloin + niter kebbeh and I wanted something light on my second visit. I decided to try their vegetable combination platter to compare with what I had the only other time I'd visited an Ethiopian restaurant. This was only half the number of wats I had at Nazareth but much larger portions of each. From 11 o'clock there is the Kit Alicha (split yellow peas), Gomen (collards), Shiro Wat (pureed split peas), Tekel Gomen (sauteed fresh cabbage and carrots), Fasolia and Carrots (green beans) and Mesir Wat (lentils), plus a salad in the middle with some slices of fresh jalapeno that had been completely de-veined and de-seeded. I loved the Mesir Wat, Fasolia, Tekel Gomen and salad; I'm not fond of either of the split pea preparations or the collards - what can I say, I'm a dyed-in-the-cotton Southern boy I guess, I love a mess of greens but I've never found any preparation I like as well as one that includes pot likker.

Light? Hah! I know well by now of course that vegetarian food is not necessarily 'light' fare. Once again I couldn't finish the dish, barely more than half, and I passed on that excellent coffee this time - I wanted to go home and take a nap.

I wanted to visit again soon so I could post a report since this place is pretty much off the radar and deserves to be known. I knew my friend Ziggy Smogdust wanted to go with me on a visit to an Ethiopian place so I emailed him a copy of the menu and we made plans. While the vegetarian dishes were good I was so impressed by the Kitfo I definitely wanted to try another meat dish; we discussed one of us ordering a lamb dish, the other one of the other beef dishes. I went in wanting to ask about the Dulet, listed on the menu (linked below) as a lamb dish - tripe, liver and red meat with onion, garlic and jalapeno with niter kebbeh, cardoon and mitmita, the ground African bird's eye pepper used for heat (shakers on each table for added heat as diners prefer), served anywhere from raw to well-done - but it is not on the in-house menu any more. I asked about the best lamb dish and she suggested the Yebeg Yeawaze Tibs. Ziggy beat me to ordering that one and I went for the other raw beef dish, Gored Gored. 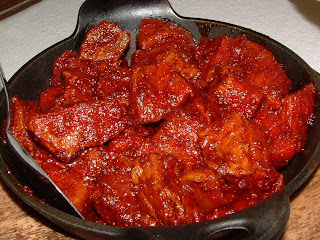 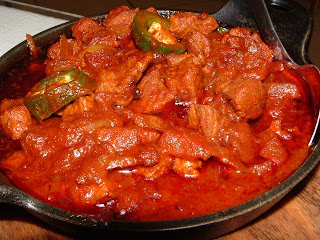 That's the beef dish on top; guess which was better? Actually we were both disappointed in the Gored Gored; supposedly filet mignon it was a little tough and chewy and though both dishes are made with awaze, not as spicy or favorful. The lamb dish was awesome, I may like it better than the Kitfo; it had a slightly greater heat level from the jalapeno slices, though Ziggy was regularly reaching for the Mitmita shaker. Both dishes came with a small side of Tekel Gomen.

One of my pieces of injeera was rather dry; I tore off a sample of Ziggy's and his was not quite as stale but neither was really fresh. This had not been a problem on my earlier visits but was a little disappointing.

I wanted Ziggy to try the Ethiopian coffee. He is much more of a coffee connoisseur than I and I wanted his opinion. I could tell from the reaction on his face at the first sip that it was going to be positive - he was really impressed and asked the waitress some questions about the preparation. Score another big one - you have to try the coffee when you go to an Ethiopian restaurant.

They are open 7 days a week; due to proximity to a school they are not able to serve alcohol nor allow BYOB. This will put them at a disadvantage to the other Ethiopian restaurants in town. Obviously if it catches on, there's going to be a problem of limited seating.

Having only been to one other Ethiopian restaurant and a grand total of four meals I'm clearly no expert nor able to judge which of the two I've visited is better but I do plan to hit both of them again, as well as Blue Nile and Addis Ababa, our other well-known places. This one is so convenient to me I will probably hit it with more regularity.

A web site is supposed to be in the works. In the meantime, I have scanned the hand-out menu and posted it here where you can read more complete descriptions of the offerings. Remember prices and dishes may differ at the restaurant; in particular, as noted above, the Dulet is not on the in-house menu any more; there are also beverages listed on the back of the menu - as best I can remember they were Ethiopian coffee and herbal tea, latte and cappuccino, sodas and bottled water.
Posted by Bruce at 9:10 PM