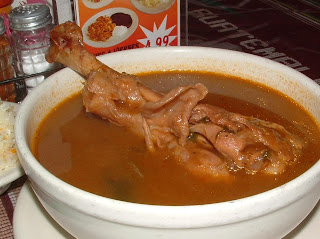 For some time the turkey soup at Guatemala Restaurant has been beckoning to me. I've had some very good Guatemalan food in Houston at the now closed Lo Nuestro on Bissonnet (the last time I went, the kitchen had taken a big nose dive) and here at Guatemala and at the Chapinlandia Bakery, but nothing that really seemed to match the dishes discussed on Antigua Daily Photo, a very good Guatemalan blog. I've been following some fascinating posts on Chowhound by a San Francisco woman who is living in Guatemala with her new in-laws and writing about her culinary experiences and it has piqued my interest in Guatemalan cuisine. Recently when the temperature dipped down to the low 90s I thought it was time to have a big bowl of this hot and spicy soup.

According to some accounts, this was a dish reserved for Mayan kings and their guests. Ik is said to mean 'hot and spicy' or to be the word for the ground form of the dried chile cobanero, a key ingredient. Most recipes include several chile peppers and I'd judge from the taste of this one that there were at least 2 or 3 although I couldn't identify any of them as I'm not familiar with them at all.

I thought there might be some guisquil (chayote) in the broth - there's been some in every dish I've had at this restaurant - or plantain or yuca, which were present on just about every dish I had at Lo Nuestro, but this was just what you see, a turkey leg in a bowl of broth. Achiote is used for the coloring; other ingredients include garlic and coriander. There were sprigs of an herb floating in the broth that I couldn't identify; I thought cilantro, perhaps, but looking into recipes online there is mention of samat, another Central American herb, and peppermint.

Whatever was in it this was delicious and very spicy for Guatemalan cuisine. It was served just with the rice and three white tamales, the firm, almost gummy tamales I've had here before. It turns out this is the classic presentation. All you get for an eating utensil is a soup spoon - this is a soup you eat with your fingers (and I went through a wad of the flimsy napkins on the table). To break the monotony of spooning up about two and a half cups of broth, I cut one up of the tamales and dropped it in the broth; it absorbed the flavors the way tofu would but it did help make the process of consuming all that broth a little more interesting.

This is a very simple but very satisfying meal, among the 2 or 3 best Guatemalan dishes I've had; I was elated and the staff was as appreciative of the big smile on my face as I was of the big smile in my mouth from the heat.

Here's a post and discussion of the dish on Antigua Daily Photo.

My earlier review of the restaurant.
Posted by Bruce at 9:26 AM