A couple of months ago I was contacted by The Linkster at The Boudin Link asking for some recommendations of locally produced boudin for him to review for his site. I'm not an expert on boudin; having found several that I like (Burt's, Boogie's, Crawfish City - all reviewed on this site), I seldom order it elsewhere. I've also tried most of the supermarket brands and a couple from Spec's deli and Hebert's. I sent him a list of all the reviews on b4-u-eat.com that come up when you search the site for boudin and also suggested he get in touch with Jim Gossen at his Great Southern Foods blog who probably would know more about where to find good boudin in Houston than me.

Since then, though, I've given some more thought to the subject and been more aware of it on menus. I tried the crawfish boudin from Poche's that I found at Spec's (didn't care for the pureed texture) and on a day trip to Galveston stopped off at Leo's Cajun Corner on Broadway at 32nd and tried both the crawfish and smoked boudins (didn't care for them much, either, again because of the texture and they were too mild).

I like a very firm textured link, firm enough to pick up and eat out of hand, with distinct grains of rice and bits of meat and whatever else is used, good and spicy and smoky. Burt's spicy/smoked is my # 1 choice.

One of the places listed on b4 that intrigued me was JW's Original Cajun Boudin Hut on Homestead, for which there were no reviews (but I found some elsewhere, on CitySearch I think).

I don't think I've ever been on Homestead Rd. in my whole life, indeed wasn't even sure what part of town it's in. It's on the far northeast side, of course, a part of town I seldom get to, but as fate would have it, recently I found myself having to make a trip up the EastTex Freeway and I decided to take a little detour and check it out. Serendipity, as they say.

JW's is located in a non-descript drive thru that has seen better days, perhaps several decades ago. There's a sign on the street but nothing on the building but an open sign and a note that Cajun deep fried turkeys are available, just below the drive-thru window. It is drive-thru service only; the only windows in the building are the drive-thru openings.

Despite that rather uninviting aspect, any misgivings were eased when I pulled up to the window and was greeted by one of the most pleasant ladies I've ever encountered in a drive-thru. I ordered some boudin; she asked if I wanted spicy or mild and I said spicy, of course. As she called out the order to someone behind her I inquired what else they offered, since there was no menu board. She cheerfully started to reel off a long list of dishes while handing me a take-out menu.

JW's serves a good variety of soul food and Cajun specialties including mild or spicy pork boudin as links or in cups, beef boudin, seafood boudin, and smoked boudin, mild or spicy. Unfortunately they were out of the smoked. Besides that there's a home made beef sausage, sausage on a stick, turkey legs, pork chop sandwiches and dinners, fish, gumbo, jambalaya, etouffee, chili, red beans and rice and so on and so forth. She said there was just one item on the menu they don't make themselves; I think it was either the sausage on a stick or turkey legs but I'm not sure as I was having trouble taking it all in. She said the chili is not only homemade, it's made with 'real chili meat' and is good and spicy. It's a seasonal offering. 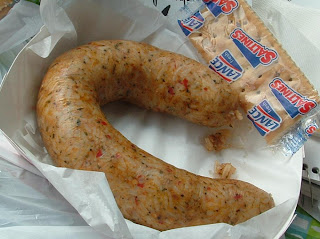 The link that I got for $2.65 was very impressively large; I calculated it to be about 11 or 12 ounces. There's not only no dining room, there's scarcely enough room for the drive-around and none to speak of for parking. Fortunately, all up and down Homestead are shuttered businesses and strip centers so I pulled in to a parking lot a couple of blocks away, put the car in Park and dug in.

The link was too hot to pick up in my bare hands but judging by the critical resistance-to-the-spork test, the casing had a moderate amount of snap, though it still was a little tough and chewy. The link was mostly rice but had full grains of rice through out plus identifiable bits of meat and red pepper. The heat level started out slow but built to a nice level and my mouth was happy for several miles down the road after I'd finished. I missed the smokiness very much and also the little bits of green onion in Burt's boudin, but I judged this one of the best I've had other than my aforementioned favorites. There seemed to be something else missing but I never could put my finger on it; maybe it was just the smokiness. It was a little on the dry side.

I think JW's is a neighborhood jewel and I wish it was in my neighborhood. As it is, I may never get another chance to try the food here but if I do, there are quite a number of dishes I'd like to sample. They're open Tuesday thru Saturday, 10a - 8p.

The Linkster has not yet posted any recent reviews of Texas boudin but there are some older reviews of a few supermarket products and other Texas made links which you can check out just by scrolling down the list on the left side-bar on the site. He gave an A to DJ's, a Beaumont produced brand widely available in supermarkets here (it's the best supermarket boudin I've tried). He gave an F to a link he got at Central Market. It sounds like a case of mislabeled product to me but I've never bought boudin at CM.
Posted by Bruce at 11:51 PM

man. i shouldn't read food blogs when i'm this hungry. i love boudin!! will have to bookmark this place to try when next I'm in Houston.

Sounds like Houston's already got a leg up on where I live. That link looks and sounds great - and the perfect price.

He was right about the CM boudin, it doesn't even remotely resemble boudin. So much that you just might think it was miss labled. Picture link italian sausage with about 5% rice added. It was good, but not boudin.