At a gas station, convenience or grocery store near you. 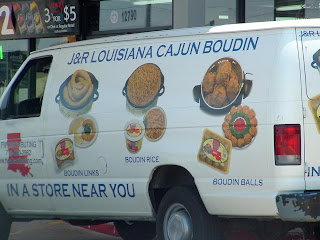 I was toodling around in Southwest Houston the other day, hadn't been able to decide what I wanted to eat but was getting very hungry and spotted this truck making a delivery at a Texaco station. Obviously it was my destiny to have some boudin for lunch.

The display was just being set up, the crockpot steamer to keep the links warm wasn't even plugged in yet but the guy from the distributor who was installing the set-up told me just to nuke it for one minute.

The link, a very tight fit in a lidded hot dog boat (I estimated 6 oz but the website says 8 but this may be a different product for ready-to-eat), came in either mild (green markings) or spicy (red markings), individually wrapped in foil, which has to be removed before zapping, of course. The display sign described this as the New Double Meat variety. Unfortunately there is no smoked variety available. Help yourself to some packets of saltines, napkins, a spork and some extra Cajun Chef if you like (the spicy needed a little more heat for my taste) and you're good to go for $2.15.

The link was very firm, might have been pick-up-able even with the casing removed. There was a slight snap to the casing. There were clearly distinct grains of rice and a few identifiable shreds of meat but the rest was a paste about the consistency of chicken liver at a deli. For some reason, the picture I snapped didn't take.

This wasn't bad, not as good as my favorite boudin nor even the best gas station boudin I've had (DJ's West, on I-10 out toward Winnie) but it was a heck of a lot better than any gas station hot dog or fried chicken I've had.

When I got home and looked them up I was surprised to see they've been around for years. I don't think I've ever seen them, even at grocery stores where I've shopped for boudin in the past.

Obviously it was my lucky day. So I bought some numbers for Mega Millions on Friday. If I win, I'll probably be writing less on gas station and taco truck fare.