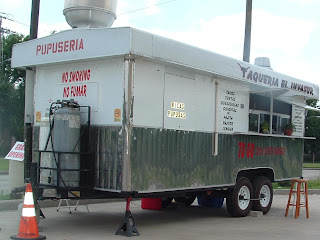 The Invader has arrived.

I was searching for some comfort food after discovering one of my favorite food trucks on the southwest side has disappeared and decided to try this new wagon. I've only been eating pupusas a few years but they're a nice simple, comforting food.

This very new wagohttp://www.blogger.com/post-edit.g?blogID=4855897705208332617&postID=4936922517754362923n sits up very high - the sill outside the window is at least 5 feet off the ground. There's not much adornment other than a couple of pot plants on the sill (a rosemary plant and a bamboo plant). The menu is very simple; only three meats are listed for tacos, tortas, quesadillas, etc., pastor, fajita and lengua. There's a very short breakfast menu and only the words ricas pupusas.

I ordered a pupusa revuelta then got distracted by a cell phone call and didn't see if the pupusera made it from scratch (it's a point of pride with Salvadorans). There was a lady who spoke broken English on board but she left soon after I ordered and ever since, I've only had Spanish speaking servers. The pupusa was a beauty to behold, except for the lack of an appropriate to-go container. Nicely browned to a golden brown over most of the surface, a bit thicker and larger than most, a little crusty from the griddle. The interior, however, was puzzling - paste-like with no detectable pieces of meat and barely detectable cheese. I'd experienced this once before that I could remember at another place and did some digging. I looked pupusas up online and came upon an article in Wiki I'd never seen before saying that this is typical in El Salvador - cooked pork is ground to a paste-like consistency (this is what is called chicharron in El Salvador) for a pupusa revuelta.

The curtido was at room temperature but crisp, vinegary - not the best I've had but good. I also got two 1/4 c portions of salsas - a deep, reddish brown smokey one that had some good heat and a somewhat watery, creamy green one that was milder. This is unusual; the sauce usually served with pupusas is hardly more complex than canned tomato sauce. I concluded I had gotten the salsas meant to accompany the Mexican offerings by mistake.

When I get a craving for comfort food it usually takes 2 or 3 fixes to satisfy it and a couple of days later I decided to give this place another try.


I got another revuelta and a queso. This time I saw the pupusera take the raw dough out of a tub, pat it back and forth between her palms and place it on the griddle. Unfortunately, her back was turned to me the whole time (if you stand on the street side of the cart, you should be able to watch). The finished products weren't as beautiful to behold as the other one had been (partly because I left them in the container until I got home and they got steamed and sweaty and a little soggy), nor quite as thick, but there were some detectable small pieces of meat in the revuelta and a little more noticeable cheese (queso fresco is used). I also found small pieces of dried chile pepper and what looked like minced carrot.

I got both the salsas again (the green one a bit more watery) and another surprise: those dark red pieces in the curtido are pieces of fiery, dried chile peppers, unchewably tough but with seeds. I've had a curtido before that was mildly spicy but I don't think I've ever had pieces of chile included.

A few days later I got the idea it would be interesting to see what this cart does with the Mexican version of a pupusa, a gordita. The dough was taken from the same tub, formed up and griddled while the meat (I chose fajita) was also taken out of a tub and warmed on the grill. The gordita wasn't thick enough and the knife not sharp enough and the gordita as presented was not very attractive and impossible to pick up without falling apart. The dough wasn't quite done enough and the meat mediocre with a somewhat pasty exterior.

I was asked what toppings I wanted and asked for cebolla y cilantro; I also wound up with a few shreds of lechuga and a slice of roma tomato. This time I got only the green salsa and it was thicker and as fiery as the red one had been before.

The price has been more than fair - the pupusas and gordita were only $1.50 each and you also get the salsas and a generous approximately 1 cup portion of curtido, even with just one pupusa.

I've become very fond of street food over the past year. There are lots of taco trucks around these days that offer pupusas but only a handful that I know of that include pupuseria in the name. Health Department records indicate a recent change of ownership for this cart. I'm guessing the new owner is Salvadoran and the old owner was Mexican.

I expect I'll hit El Invasor again from time to time but I'm going to stick with the pupusas. I think it's their forte. And I'll remember to open the take-out container for the trip home so the pupusas don't get steamed.
Posted by Bruce at 9:10 PM