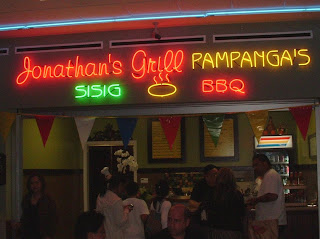 The gang that got together for the BBQ comparison last November got together this week to try Jonathan's. Airon, whose family is from Manila, had promised to introduce us to Filipino food so when he announced another visit to Houston, we started making plans. Howard had seen signs in the Viet Hoa Center on the BW at Beechnut of a new Filipino fast food place and when I went to check it out I discovered there are two Filipino places in this food court. Jonathan's serves 'Authentic Filipino Cuisine, Kapampangan Style,' 'Sizzling Sisig, Barbeque and more.' Airon says the Pampanga province is noted for it's culinary excellence; this is the haute cuisine of the Philippines. Reading up on it, I was so pumped up I couldn't wait. 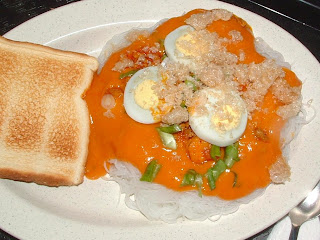 On my first visit I tried the Pancit Palabok. To eat this, you add some lemon juice (jars on the condiments bar) and stir it all together. As is sometimes the case when trying a new cuisine, I wasn't really wowed with this dish. I liked the noodles, the crunchiness of the pork skins on top and the ground pork underneath plus the green onions but the sauce was nothing special to my palate. Airon says the dish is all about texture and how well the shrimp sauce is made, from pulverized dried shrimp I think.

It was obvious, though, Jonathan's is not your typical food court eatery and I went again a few days later.


Second time out I went for the Sizzling Chicken with Rice, served in a butter-rich gravy. Fried chicken in the Philippines means a very small bird, Cornish game hen size, un-battered or coated, deep fried whole or halved, then served with a sauce. This was much more impressive. On this occasion the rice was pretty fluffy but Filipino rice typically is sticky. In the background is the small side of atchara, pickled papaya, which I really liked. As should be apparent from these pictures, portions are kind of modest but I concluded from this visit that I was going to go in the direction of sampling more of Jonathan's own creations rather than his re-creations of other restaurant's dishes.

Finally it was time for Airon, Howard and myself to meet again. I had seen the combo with the pork bbq (skewer) and sisig and knew I wanted to try that plus the lumpia (Filipino egg rolls). The restaurant didn't have enough of the sisig for all three of us so we got what they had left, opted for 2 bbq pork skewers apiece, and an order of Fried Lumpia Shanghai. We each got a side of rice. 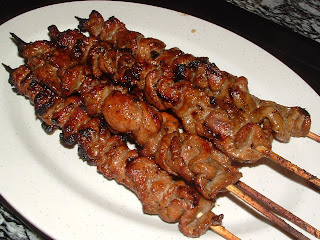 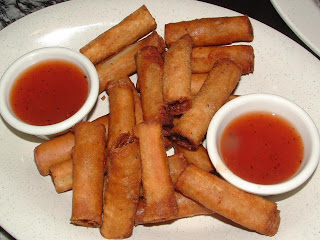 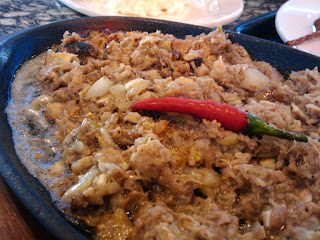 I could nosh and nibble on these first two dishes all day long. The skewers are popular street food in the Philippines, made with pork sirloin, I'm guessing, sliced in strips and folded on the skewers. The snack sized lumpia are a real treat. According to Jonathan, the Shanghai sauce is just ketchup, vinegar and sugar, plus a little love. Hmmm. Wonder what those specks are? The skewers were bigger than I remember them from the combo platters I saw being served before and I would have been plenty satisfied with just one, given everything else we had.

Aling Lucing's is a restaurant in Angeles City with a famous version of Sizzling Sisig; the dish is supposed to include such things as pigs head and liver. We detected some offal in the dish but not much; like the Pancit Palabok, it needs the addition of a few drops of lemon juice. I thought it was an interesting dish and shouldn't be off-putting even to those who think they don't like offal. Airon said there should have been more crispy pieces.

Note that a section of Jonathan's menu is Pulatan, meaning it is meant to be consumed with beer. Howard had brought along a selection of beers he brought back from a recent trip to Colorado. We tasted a Port Brewing Wipeout IPA first, then a Lost Abbey Red Barn Ale, and then the final one was the Odell IPA. I am not much of a beer drinker. Howard and Airon both loved the Odell best but I found the Lost Abbey selection most appealing; it reminded me very much of the excellent beers of the Celis brewery in Austin. By the time we got around to the last one, though, I was pretty sated.

Finally, Airon insisted on getting some Flan. The portion we got was intended for take home and supposedly was enough to serve 3 people. More like 6, maybe; it was so rich and creamy, we had to pause after each spoonful. It was an over-the-top finish to the meal and again I forgot to get the camera out.

We saw (and smelled) several other dishes being served including the two other fried chicken dishes, the Salpicao and Halo-Halo, a heaping ice cream, fruit and shaved ice desert.

I wasn't really sure I wanted to taste the spaghetti but I had really wanted to get a picture of it. I couldn't convince either of the others to order it but after seeing several other customers dig into their bowls with relish, I'm going to have to try it.

Word is getting out about Jonathan's in the Filipino community already. I almost had the place to myself on my first visit but on the last two, several tables were occupied with large groups ordering tons of food and obviously enjoying themselves.

Pinoy Fast Food is the only other restaurant open in the food court, a steam table operation. It's obvious several other restaurants have come and gone in this court which is at the far southern end of the Viet Hoa Center. I'd wager many people come and go to the Center and never realize where it is. The hours are in flux; signs variously indicate 8a to 7p or 8a to 10p but right now Jonathan's is only open 8a-7p Wednesday through Friday, 8a to 3p on Saturday and Sunday so call to confirm hours before driving a long distance (281-530-8887). On Friday evening we were there until almost 9pm and some customers came in just before we left.

The fast food buffet is also closed on Monday.

Note that several of the dishes on the weekend only menu, Tocilog, Longsilog and Dangsilog, are breakfast dishes. I think they would have served me the Longsilog on a Sunday about 1p if they'd had any left, however. Airon says the fact they're weekend only specials may mean Jonathan cures his own meats for those dishes.

Prices and dishes may vary at the restaurant from the menu posted above, of course. There's an extensive catering menu and the phrase 'Itawag ninyo, iluluto ko' which basically means call me, I'll fix anything you want, but we found out that applies only to the catering menu.

It is a bit presumptuous to start talking about my best finds of 2010, I guess, but I have a hunch Jonathan's will be on my list.
Posted by Bruce at 10:37 AM

I really appreciate your review. Next time you come, please try the spaghetti and the beef salpicao. I hope to see you soon. Thank you.

Looking forward to another visit and I will try the spaghetti. I also want to try the breakfast dishes on the weekend.

I am ready to try the spaghetti as well. I definitely want to try the weekend items. I had a great time checking out this place.

Pampamga foods are simply one of the best! chow chow!

We were there last Sunday and the wait was pretty long. People were in line waiting to taste the food. We waited at least half an hour to get the food but let me tell you it was worth all the wait . We had the palabok, lumpiang ubod, sizzling chicken adobo, bbq and halo halo. The bbq was very juicy and tasty. I was going to order the chicken ala max but they ran out. I will definitely have that for sure on my next visit. Flan was amazing as well. Awesome food. Keep up the good work and continue serving quality food.

sorry but i was not impressed with you food. the bbq pork taste like banana chetsup and the sisig is too salty.