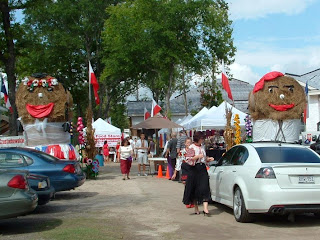 It was a rather small festival but a good crowd had gathered as I was leaving, just before noon. The lady next to the car in the foreground is wearing some traditional garb as is the child behind her. The colorful, large handmade flowers adorning the brow of one of the hay bales were also all over the festival grounds attached to poles like those visible here. The building to the right is the brand new, unfinished Pope John Paul II Parish Hall, the cornerstone for which was being dedicated as I was leaving.

The booths on the right included the Polish American Congress plus Croat, Ukraininian, Czech and Polish booths, then there were some handicrafts booths on both sides of the walkway. The food stands - the most important part - were directly ahead. 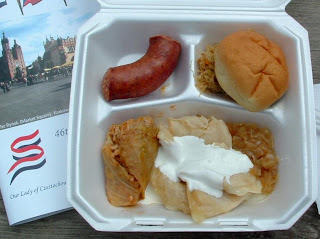 The line at the Polish food booth was long and there was only one lady working it; when I found out the Golabki had not yet arrived, I decided to go for the Ukrainian plate instead. The Polish booth was serving sausage and meat ball sandwiches on what was probably the lepinja from the Balkan grocery store, plus pierogi, which I never got a look at. They also had some plates of festive cookies, wrapped and tied with a ribbon that looked good but I didn't want to stand in line for just that.

The Ukrainian booth had three ladies putting the plates together plus one taking the money and moved much more quickly. For $8 you got 4 pirohy (mashed potato and cheese filling) with a very mild sour cream topping, onions, a cabbage roll (rice and beef), a portion of sausage and some sauerkraut, underneath the roll (which I'd guess was store bought). The menu said the Polish pierogi would be topped with fried onions but these were not fried; the sausage was very good, mostly fine ground beef and a little pork, I think, natural casing, very juicy. I didn't think it was the kielbasa I've had at Polonia nor bought at the Polish grocery store just down the street so I asked the lady and she said it was Eddy's, from Sam's Club! She said they all like it. Eddy's is based in Yoakum which is near Praha, the first Polish settlement in Texas, and all the famous painted churches, so perhaps there is some Slavic heritage in Eddy's background (the website doesn't mention it). The sauerkraut was very mild, with minced carrots and caramelized onions; I've bought a product called Sauerkraut Salad at the Polish grocery store that was like this although the onions were not at all caramelized in that product. It was a modest amount of food but good. The sauerkraut and sausage were the hits of the plate; the Polish place was supposed to offer 3 different pierogi including a mushroom and sauerkraut and a sausage one so I was a little disappointed but I assume there's something like that on the restaurant menu and I've been meaning to go there again, soon.

The barbecue booth was also doing a good business, though not as long a line as the Polish booth. They were dispensing Pilsner Urquell on draft and had some other bottled beers, I think. You could also get that traditional Slavic accompaniment to go with a good cold one, nacho chips.


I went back to the Ukrainian booth to get some pastries to go, a Poppy Seed Torte and a slice of a log called Karpaty. The lady said everything (except the sausage, obviously) at the Ukraininan booth was homemade. The poppy seed torte was very good, with a lemony icing with a hint of some fruit. The Karpaty - the name for the Carpathian Mountains in Slovak, Czech, Polish and Ukrainian- had cherries and cream cheese as the main ingredients.

There was also another table with lots of pastries and kolaches advertised, though I didn't see any of the latter. I wanted to get some of the Cernik, the Polish version of cheesecake made from a type of fresh cheese but I thought it didn't look like anything special so I passed.

I had wanted to get a plate of Bigos to go but the line at the Polish booth was longer than ever and there appeared to still be only one person trying to do it all (and getting lots of questions). 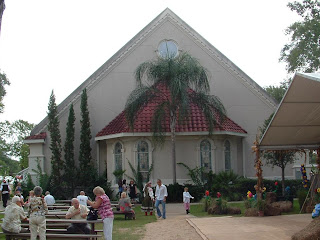 This was the west end of the church in the festival courtyard with the stage on the right, food tents and booths off to the left. I didn't remember to get a picture of the entrance to the church. 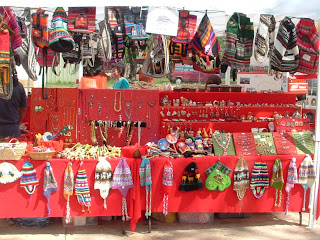 This was one of the crafts booths.
Posted by Bruce at 6:49 AM

Where do you hear about these great festivals? I would have loved to have known ahead of time. I know your a food blog not a festival blog :)

The Chronicle's Entertainment section has a Calendar that lists a lot of the smaller, lesser known festivals, like this one. The big ones, like the Greek Festival, usually receive a lot of publicity in various venues and even have advertising budgets.

You could also sign up for the b4-u-eat newsletter. It comes out every Wednesday and frequently includes notes about upcoming festivals.