A Couple of Venezuelan Places

I’ve been interested in sampling Venezuelan cuisine lately and heard about this little place in Katy-zuela but it took me some time to identify and locate. It’s a funny name for a place; I presume the name of the owner is Deli. It's at a Shell station right up the street on Mason Rd. from Marini's Original Empanada House. The latter is Argentinian but Deli's is Venezuelan - apparently Katy is home to quite a few South Americans. You'd never know it until you see the menu but except for hamburgers (beef and chicken) and a Desayuno Americano, everything on the menu is Venezuelan.


I tried an Empanada de Cazon (shark) and a Pastelito con Queso Blanco. Unfortunately like most of the other Venezuelan places I've tried they were cooked in advance and kept warm. They were both good and warm but the empanada was really tough, having dried out too much, I guess, and tasting too much of the grease it was fried in. The shark was minced and the filling like the stuffing for deviled crab and I would have been hard pressed to identify it as shark if the menu hadn't said that's what it was. I was hoping for chunks. This is my first experience of the cazon and I've since found out it's prepared that way at Tuttopane. The pastelito was better, not as greasy tasting, a lighter dough than Marini's Argentinian empanadas.

They have a pretty full menu of typical Venezuelan food including some platos. Starting late in October and through the holiday season they will be offering hallacas, Venezuelan meat and vegetable stuffed tamales, plus Plato Navidad, which is described as tamale, pork, chicken salad and ham bread?

The place is very plainly decorated but clean; the staff was friendly and helpful and they were doing a good business when I was there in early afternoon.

Tuttopane, Artisan Bakery and Café, 13525 Westheimer, between Eldridge and 6.

This is one of three places listed as Venezuelan on b4 but it's a bakery with strong Continental, especially Italian, influences and a small lunch room with mostly Venezuelan items. I’ve stopped by three times.

On my first I had a cheese arepa, like a pupusa made with an arepa. About the size of the bottom half of a large hamburger bun with queso de mano, a fresh mozzarella like cheese. I wanted to try one with just the cheese but next time I'd get one of the meats as it was kind of boring; the cheese was not melted. What I did like was the arepa; all the ones I’ve had here have been nicely grilled to crisp them up which adds considerably to their appeal. I added a little Montauk's West Indian Salsa Flambeau before reading the label and seeing that it was made with scotch bonnet peppers. That livened things up considerably.

The pastries look interesting as did a boule of whole wheat bread; they had ready-made empanadas and pastelitos (the former made with corn flour, the latter with wheat - both can have savory fillings), plus a 'kolache' in a huge croissant and a Chilean empanada (baked, with ground meat). The cachapa is described as a corn pancake and can have various toppings for $6.50. The arepa was $3.95. They have sodas, including several South American sodas, and coffees. The sell several Venezuelan cheeses and other items. A very pleasant fellow welcomed all of my questions.

I stopped off a second time when I was out that way and tried a pastelito and an empanada.. The pastelito dough that is very much like a light, fried pie, round, about the size of the lid of a quart mayo jar but not quite as thick, a thin disk in appearance. The chicken breast was minced. I liked the dough actually a little better than the filling which didn't wow me but the whole thing tasted a little of stale cooking oil, leaving a little bitter taste in my mouth.

The empanada was much better, a corn meal dough, much like what is used on corn dogs, and larger than those from Sabor Venezolano (and less greasy). It was not fresh out of the fryer but was still very good and warm. He had only 2 varieties, one with beef, one with cheese. The beef was their version of Carne Mechada and I liked it better than Sabor Venezolano, also. The aroma which burst forth when I first bit into it was part of the reason. I remember being surprised after trying one of these at the truck to read that they were made with stewed, shredded skirt steak as I thought what I had was probably brisket flat. This was more likely skirt steak and had a beefier flavor and I liked the tougher, even slightly stringy texture better. 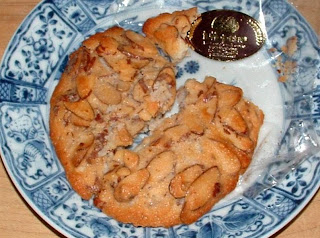 I also tried the Almond Tejas, which means shingle or tile. Very good. 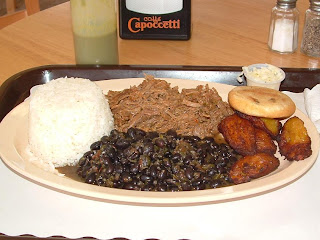 On a third visit I tried the Pabellon Criollo, one of only two platos on their menu. This is supposed to be the Venezuelan national dish - Carne Mechado (shredded beef), caroatas negras (black beans), arroz, plantanos maduros, This is the first time I’ve tried this dish and I was a little disappointed; I didn’t think the carne mechada was as good this time as the time I had it in the empanada and the guasacaca - Venezuelan guacamole sauce - was not as rich and creamy as at the Sabor Venelozano truck.

I have yet to try any of their other pastries or large selection of cookies (Italian inspired) but they look very good. You can check them out for yourself in the gallery section of the website. They have Italian bread and baguettes ready to go every day as I understand it, other breads are special order, although they do have some out for display.

Every time I’ve been there they’ve had a steady stream of customers but all for take-out, I’ve been the only one to dine-in.

In addition to these two, I’ve had Venezuelan fare at Sabor Venezolano, the mobile vendor at Westheimer at Crossview, and at Arepas y Empanadas Dona Maria, a trailer in downtown Humble (both of these reported on in the International Roll Call of our mobile food vendors) and at the short-lived Pana’s Café on Scarsdale. I have yet to go to Miguelito’s. The best empanadas I’ve had were at Pana’s and Dona Maria’s, although the filling at the latter was not very impressive. They were the only ones who made the empanadas fresh to order instead of having them ready in advance.
Posted by Bruce at 9:25 AM

Thanks for the review! I've been trying to check out Tuttopane, but they always seem to close early. I guess it closes right after lunch hours. I'm excited to have stumbled onto your blog b/c it's very informative. Have you tried Asturias on Dairy Ashford & next to Westpark Tollway? They make pretty decent Argentinian facturas, but it's better to show up early before noon on the weekends. 80 cents per bite size facturas, but I haven't tried their coffees yet.

Hey, thanks. I hadn't had lunch yet when I read this so headed on over there. I've passed by many times but never stopped. Got a couple of the facturas and a beef empanada. Loved it. I really appreciate it.

Regarding your other comment on the other place: health and hygiene issues should be reported to the Health Department not to a blog or restaurant review site. They'll send someone out to investigate. I've done that before but I don't publish those sorts of charges here. Bad service is one thing, hygiene issues are something much more serious.