This is a new place - a small convenience store and bakery with a steam table breakfast and lunch in a mostly unoccupied, very new strip center. Chapina is a nickname for the people of Guatemala. The business card says Pan Calientito y Pasteles Frescos todos los dias.

On my first visit everything on the steam table except the refritos negros looked pretty good - Pepian de Pollo, Guisado de Puerco and fajitas. I went for the first, a large, split chicken breast in the Mayan/Mexican mole Pepian, made with pumpkin seeds and sesame seeds. 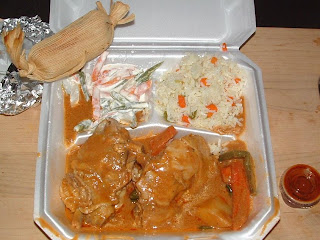 This was a take-out meal I wish I'd gone to the trouble to plate for a more appealing presentation, to do it more justice. It was a very enjoyable meal; the mole was a bit thin and the chicken not as tender as I would have liked, but the vegetables in the mole, carrots, potatoes and green beans, were very good. I could have eaten a vegetarian version of this with just the vegetables, I think. The vegetables in the rice repeated those in the mole, diced carrots and green beans, and, again, the second side, which was a real surprise when I got home and opened the container - more carrots and green beans, stewed but not overcooked, served chilled in crema. This was not on the steam table and actually the hit of the plate, partially because I was relieved not to have gotten any of the refritos.

I also got their version of a chuchita, a snack tamale. In 4 of the 6 Guatemalan restaurants I've eaten at in Houston, it's usually larger than a Tex-Mex tamale, as large as the Mexico City type tamales at Dona Tere, but this was the size of a roma tomato. It seemed baked rather than steamed and was dry enough to pick up barehanded and eat, more like an empanada than a tamale. The tamale as finger food - a new one on me. The filling was tender stewed chicken breast and potato in a mild red salsa.

The salsa in the separate container was a dark brick red color and rather bitter, with a heat that faded very quickly. I couldn't identify the taste but perhaps it was the chiltepe or chiltepin which is said to be the most commonly used chile pepper in Guatemala. I'm not sure what it was supposed to be used on, perhaps the chuchita, although it was in the bag with the combo plate and I didn't get any the next time I got chuchitas.

The tortillas were handmade, fresh, thicker than Mexican corn tortillas.


On a second visit nothing on the steam table looked very appealing so I went for a tamale. I asked if it was a tamale colorado or tamale negro and I thought the server said 'black,' (very little English is spoken) so imagine my surprise when I got home. I think what she must've said was blanca, meaning a tamale made from white corn meal. This had a filling of stewed chicken breast and was very good. Guatemalan tamales sometimes include vegetables, raisins and nuts in addition to meats; this one had one solitary raisin.

The signs and menu indicate tamales and chuchitas are available every day but there were no chuchitas left by the time I got there on this occasion. I also tried some of their cookies - meringues and a peanut butter cookie, which were good.

On a third visit I just tried more of the chuchitas (there were no full size tamales); they were not as good as the first time and a little messier to try to pick up as finger food.

The business card also says Desayunos y Platillos Differentes Todos los Dias and that's the problem - with the varying steam table menu you don't know what's going to be available any given day. I'd certainly have the Pepian de Pollo again and I'd like to try the Guisado de Puerco but other dishes have not looked that good. There are some small tables for dining in and apparently real dinner ware is used. Desayunos are $3.49, platillos $4.99, chuchitas $1.50, tamales $3. There is apparently a $.50 charge for take-out.

Communication has not really been a problem and the staff has been very friendly.

The Pepian de Pollo inspired me to revisit Restaurante Guatemala which I had been to only once, just before Ike. I liked the mole itself better at that restaurant but the sides were better at Chapinlandia. I've updated the Guatemala review with a picture on the side bar.
Posted by Bruce at 11:56 AM