A Tamale, a Tamale...my Kingdom for a Tamale

Lord have mercy on anyone who has to eat tamales out of a can. Or for that matter, the machine-made extruded variety so common at Tex-Mex restaurants.

Only if you’ve had a hand-made tamale can you understand how this simple peasant food came to be a staple in so many cuisines. 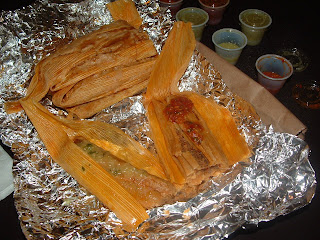 that comes by your place of work or the time or skill to make your own. Some of my favorites are from Alamo Tamale Co., the same company whose packages of machine made tamales are commonly available in coolers and freezers in grocery stores all over the area. Their store on Navigation, just east of downtown, offers a variety of the machine made tamales but they also offer hand-made tamales in either chicken or pork, fresh and hot out of the steamer. I prefer a very moist tamale and these are excellent but it’s best to get there earlier in the day. I do think sometimes they may slip some machine made ones in on you toward the end of the day, or at least some that aren’t that fresh. Get yourself some of the salsas they offer and a pile of the totally inadequate, flimsy napkins and chow down. There’s very limited accommodations for dining in the store - a stainless steel counter around the perimeter - so I usually make a dash for home (or a picnic table at a park) for my feast. Even with a 25-30 minute drive in traffic, I’ve gotten home and found my tamales still steaming hot.

They also have a few other hot items served from a buffet but despite the enticing aroma I’ve never tried any of them. 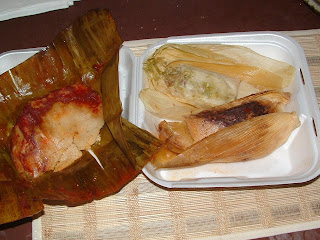 peace with them but don’t really like them in a big way. These are Mexico City style, much larger than typical Tex-Mex tamales and I’ve usually found there’s an awful lot of masa compared to the other ingredients and they’ve also tended to be very dry, verging on caked texture. But some of them can be very good. Again, I suspect it’s best to go earlier in the day. Dona Tere seems to be establishing some outposts around the area; there are 3 locations listed on their website.

One online source says that there are over 100 different kinds of tamales common in Guatemala and I’ve tried the tamales at several Guatemalan restaurants and panaderias in Houston, ranging from the chuchita, a snack sized tamale that can be about as large as a tennis ball, to tamales that are a meal in themselves.

My favorite tamales in Houston right now are Salvadoran, specifically from La Roca, a tamaleria, taqueria, pupuseria and panaderia on Bissonnet across from Bayland Park. Salvadoran tamales differ a lot too, ranging from so dry a knife is required to the ones from La Roca which are very moist; some others I’ve encountered are gelatinous rather than creamy. They’re much milder in flavor than Tex-Mex tamales, so don’t expect any heat. They’re also larger, about the equivalent of 3 or 4 Tex-Mex tamales, and with larger pieces of either chicken or pork plus cubed potatoes as filling. The chicken and pork ones are steamed in banana leaves but the plain tamal de elote is nothing but masa and is steamed in a corn husk. It is usually served with a dollop of rich Crema Salvadorena, similar to French creme fraiche.

Neither these nor the Alamo tamales the way I like them are finger food or things you should try to nosh on while driving.

I’ve recently discovered that La Roca supplies tamales to some carnicerias, such as 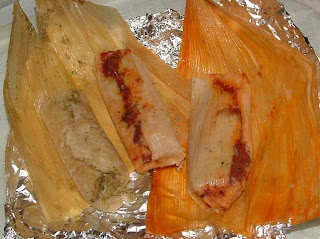 the Carniceria La Michoacan (at least location # 27, on Bissonnet near Dairy Ashford) and Nortenito, a carniceria on Bissonnet at Wilcrest. These are very good too, more like Tex-Mex tamales than Salvadoran and spicier, too, but they're only available at Nortenita on weekend mornings in limited supply.

My review of a Colombian tamale at Las Delicias Panaderia.

My review of Salvadoran tamales at La Roca.
Posted by Bruce at 8:32 AM