See the first part of the report here. 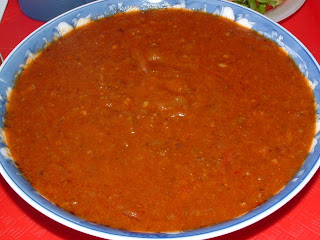 On two separate visits I had decided to try the Asida (the dish I had seen on my first visit; this is the spelling here) but it wasn’t available. This is the Sudanese version of fufu, made with corn or wheat or millet instead of manioc or yam (they make it with wheat here) so I finally settled on the Tagalia, the stew that is served with Asida. This was a much more likeable dish than the Mo Khia; it’s made with tomato and onion and oil, with minced, dried meat, thickened with okra powder. I had ordered pita bread to accompany this but was told it was best with the injera and when I objected the injera would fall to pieces was told that’s the point - you can eat it with you fingers, messy as that is, or tear up pieces of the injera and add them to the stew to dissolve and add body and flavor, then eat with the utensils provided. I remembered some Ethiopian dishes also involve dissolving injera in the wot so I followed the suggestion and had an enjoyable meal - could’ve eaten more of this one. I also remembered to add the Shata to liven it up.

On another visit they did agree to make the falafel; it took about 40 minutes. I got a sandwich, a large wrap with broken falafel patties and the basic salad with Shata on the side. I unwrapped it to add the Shata (it could have used some tahini or something, too) and on the second bite, it fell all apart - the pita had been scored for halving, apparently, and I should have wrapped it back up in the foil before picking it up. I wound up eating a falafel salad. I’ve also sampled the Sheya, pieces of lamb ribs in a spicy paste. I don’t know if this is served as a stew or what - the meat wasn’t fully cooked yet and was tough and chewy so I had gone for the falafel sandwich on that visit but that dish had promise.

The small menu also includes Comunia - stomach - they didn’t have that the time I asked about it, and Adas, a lentil stew that I think also has lamb in it. Both Taamia (their spelling) and Falafel are listed - Tamia is the Sudanese word for Falafel and these are the same thing though they’re listed separately - and there is Soup - a stock made from bones. After numerous visits and trying to learn the menu, I was told it’s an old menu and there are going to be changes but I don’t know what’s going and what’s staying. It’s been apparent on each visit that the place is evolving under the new ownership. A previous name of the business was Sudany Grocery.

I’ve sampled the Baklawa, simply made with phyllo and honey (there were no nuts in my large piece), simple strips of glazed pastry dough just called ‘cake,’ as was the cookie, and a Sambusa or Sanbus, a flat, triangular meat pie with a spicy ground meat and onion filling, more like a Paratha than a Samosa.

The best things I’ve had here are the Ful Medammes, Sambusa, Tagalia and Shata and the date filled cookie but I’ve only seen the meat pie once and some times the pickings on the table of pastries is pretty slim and, as is apparent, sometimes they can’t serve some of the dishes on the menu. It is also fair to say this is not a cuisine that carnivores will love.

The young man I’ve dealt with has been very helpful and pleasant, putting up with my barrage of questions (there isn’t much about Sudanese cuisine online); he speaks good English, having to pause only a few times to think of the word he needs to explain something to me.