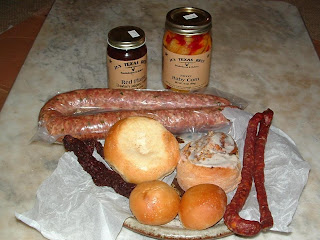 Mackay, TX, on US 59 between Wharton and El Campo


Junior’s is the retail outlet for H & B sausage company of El Campo. It’s a bit smaller than Prasek’s Hillje Smokehouse on the other side of El Campo, less touristy and with a smaller selection and menu.

The first time I stopped in I mostly window-shopped. I tried a sliced beef bbq sandwich and picked up some kolaches and a venison, jalapeno and cheese summer sausage. The sandwich was hefty, about 9 or 10 ounces of meat, but the meat was a little tough and underdone. A link sandwich or plate might be the better way to go here but if you’re hungry for bbq in this area I’d suggest you stop at Hinze’s up the road a piece in Wharton for some good pecan smoked Q.

They use a variety of meats in their summer sausages including beef, turkey, bison and venison. The sample I got was pretty good although I thought they used a mediocre cheese and the heat seemed more due to black pepper than jalapeno. Unlike a true summer sausage, refrigeration is required and I wound up tossing most of this after the power outage caused by Hurricane Ike.

The best things I’ve had are the elk jerky ($31.99/lb) which was very light, not tough and chewy at all, the jalapeno and cheese survival sticks and the iced poppy seed roll which I’ve gotten both times (like a cinnamon roll but with poppy seeds). The kolaches have been good though nothing special.

The have a large variety of their own products - jams, jellies, pickled vegetables, seasonings, etc., plus products from Fischer-Wieser Farms and Fredericksburg Farms, both in Fredericksburg, and New Canaan products from Dripping Springs. I haven’t tried any of the Fredericksburg products but I’ve had products from New Canaan before and they are very good. The Jr.’s Texas Best Red Flame preserves I picked up (strawberry plus jalapeno) were more like jam than preserves and only so-so; the pickled sweet baby corn was very good though a tad too sweet for my taste (baby corn with pimentos done like bread and butter pickles).

On my second visit many of the meat display cases were empty for some reason. Jerky and survival sticks seem to be bigger here than sausages but I thought I remembered from my first visit more sausages to choose from. The had numerous frozen products including farm raised rabbits in cry-o-vac packs which looked like they had been marinated or seasoned; I wish I had picked one up. I did pick up some of their fresh smoked green onion sausage which was also available unsmoked and frozen. Compared to the similar product from Poffenberger’s Bellville Meat Market I picked up some months ago I wasn’t too impressed with this which seemed to have some filler material making it kind of mealy. It also had less of a green onion presence, though it looked very good.