I’ve been sampling the various Central and South American cuisines available in Houston for the past year or so and so far Guatemalan cuisine has proved to be the least interesting and adventuresome. This place may be the most accessible for those not familiar with the cuisine, however, it’s a bit more nicely appointed than your typical Houston hole-in-the-wall ethnic restaurant, well lit and friendly. The menu is very simple and unthreatening.

One online source says there are more than a hundred different styles of tamales known in Guatemala. One I’ve encountered at every place I’ve tried is the chuchita, a snack sized tamale that can actually be quite large. The first time I had this at Lo Nuestro I loved it, the shape and size of a billiard ball, moist, with a nice chunk of very moist and tender pork embedded in it. Everywhere else I’ve had it, including revisits to Lo Nuestro, it’s been about the size of 2 or 3 Tex-Mex tamales and sometimes so firm as to necessitate a knife and fork. The chuchita at Guatemala was very dry with a very dry chunk of chicken breast inside; the best part of it was the gravy-like salsa which accompanied it. Guatemalan food is not at all spicy, however. Other Guatemalan tamales I've encountered can be as large as 6 or 7 Tex-Mex tamales and constitute a meal in themselves. It is said to be considered rude to order more than one tamale at a time in Guatemala.

The only other tamales on the menu here are rice tamales, also an appetizer, which I didn’t try.

All of the staff I've encountered here speak enough English that I've barely had to call upon my limited Spanish. On my first visit the waitress suggested one of the chicken dishes, Pollo en Amarillo, chicken in a Mole Amarillo, which turned out to include carrots and chayote and was accompanied by plain white rice. i thought it was okay but nothing special and I concluded I had been steered me toward something very safe and Americanized but I have since learned this dish is a staple of the country's cuisine. It came with three individually wrapped tamales, called tamalitas, which the waitress offered to exchange for tortillas but I opted to stick with the tamales to see what they included. It turned out they included nothing - they were just masa dough, very firm, firm enough to be used as bread sticks although a little chunky and slippery for that purpose. 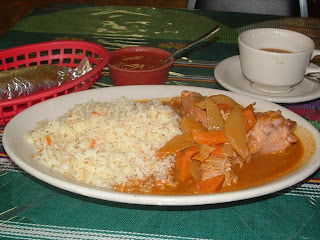 This time I opted for the tortillas as the bread side. They came wrapped in foil and very hot and falling apart from the steam. Even after they had been delivered the waitress asked if I wanted to exchange them for the tamalitas but I slightly preferred the tortillas.

The desserts at Guatemala include Chocobanana and Chocopina plus Nuevo Tres Leches that are touted on a table card but I have not tried any of them. One dish I do want to return to try is the Kaq-ik de Pavo, a traditional turkey soup of Guatemala.

Note: this article was updated and revised 10/9/09 after a second visit.

Correct name is chuchito, with an "o"