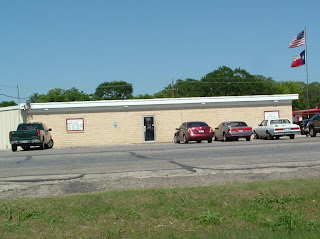 During hunting season there is a sign hanging on the door of Vincek’s Smokehouse in East Bernard which lists names and phone numbers of butchers that hunters can call if they have an animal that needs to be processed and Vincek’s is closed. From my very first visit I was impressed that service is a hallmark of this establishment. (I’m not a hunter and had never seen something like that before - I’ve since learned it’s common practice). It seemed to me when I was there a week before Christmas several years ago that half the town of East Bernard must be working there preparing party trays while the other half was just shopping or visiting with staff and getting big hugs as they shared stories of families and the holidays.. I felt a little lonely until I got some food to chow down on. Vincek’s is a butcher shop, and a very large one for a community the size of East Bernard, a smokehouse, a bbq joint with about 8 tables, and a Czech bakery. There are a few convenience store items and a line up of home canned goods available also.

I went for the bbq and to pick up some sausage, which I had heard raves about. I had brisket and sausage, with sauce on the side. They have the usual assortment of side dishes - the potato salad was homemade and particularly good. The pecan smoked brisket was tender and juicy, with a smoke ring of 1/8" plus, not bad at all. It was underseasoned to my taste and didn’t have much smoke flavor despite the smoke ring but there was some nice charring of the outer edges. However I knew from the first bite the real winner here is the sausage, which they make on premises. I scarfed it down, dipping some of the pieces in the sauce though they really didn’t need it (they leave plenty of fat in the mix to make the sausages juicy), and I was glad I made the trip.

I have gotten so enamored of the Central Texas approach to bbq as meats flavored with smoke and simple seasonings I usually use sauce only if the meat is uninteresting, but this sauce reminded me of what bbq sauce used to be like before it became trendy to make it bolder and spicier and heartier, i.e., chunky. The sauce is rather thin but it complimented the sausage well rather than overwhelming it. I realized I’m a traditionalist when it comes to bbq sauce.

The display case of their home-made sausages and jerky is almost as long as the fresh meat case and they also display some of their sausages and jerky on top of a portion of the fresh meat cases. East Bernardians must be big meat-eaters. I’ve taken along a cooler on all of my subsequent visits and picked up some of several varieties to go including some of their summer sausage and some of their peppered, smoked bacon. They have three varieties of summer sausage, a regular, a black pepper encrusted and one with large chunks of hot cheese, as the butcher described it, included. My favorite has become the hot pepper cheese one but the black pepper encrusted one is also excellent - just a little messy with all the pepper that will flake off as you handle it. Among their sausages there isn’t a bad one but I probably like the hot links least. I’m not a big jerky fan so have only tried it once; I do like their beef sticks a lot, though.

East Bernard is a Czech community which means you have to try the kolaches. These have usually been very hefty kolaches compared to what I’m used to getting in the city with a heavier dough and lots of filling, between 1/4 and 1/3 cup I’d estimate, but on my last visit they were much smaller but I don't know if that was a permanent change. If you get there after noon they may all be gone. East Bernard is not a tourist destination so they just bake enough for the local regulars, I guess. There are also some very good looking strudels and bundt cakes, cookies and brownies in the bakery case, and some loaves of home-made bread. The bundt cakes and cookies I’ve tried have been very good. Among the home canned items are dilled green beans, corn relish and peach and cherry cobbler and some of their bbq sauce.

In the music department at Vincek’s you can pick up the latest releases from the Dujka Brothers, the Shiner Hobos, Sil Krenek or others for your collection.

Vincek’s is in a plain brick block building, devoid of windows and marked only by block-lettered signs, located on TX 60 just south of US 90A, the Houston-San Antonio highway before I-10 was built, in East Bernard, less than 60 miles west of Houston. The starkness of the exterior will completely mislead you about the delights awaiting within.

UPDATE: They've added a website since this report was posted with necessary information about hours, etc.
Posted by Bruce at 5:53 AM