I don’t know how almost 25 years went by before I found this place but it’s not well-known, a hidden gem just a block off Westheimer on the west side, the closest to my home of my favorite burger joints in Houston.

The juicy, hand-formed patties are generously proportioned and come with raw onion 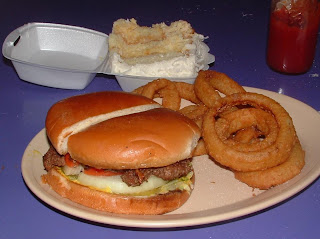 (grilled onion available for a few cents extra). The double meat burger was my favorite at first but it’s just too big for my appetite and doesn’t allow room for that quintessential accompaniment to a great Texas burger, a slice of home-made Pineapple-Coconut cake. I always have to get the cake to go as it is.

Onion rings are great, the fries a little less so. Besides six or eight home made desserts they offer a few flavors of Hank’s Ice Cream.

They cut the burgers in half for you I think not because they’re too big to handle but because they’re so juicy. If you tried to eat one of these whole by the time you got barely half-way through the burger would be disintegrating in your hands.

The hickory smoked barbecue is unremarkable, sorry to say, but they do make a fine 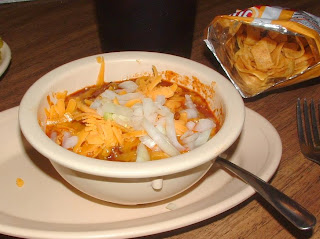 bowl of chili (no, it’s not out of a can) which makes for a good do-it-yourself chili pie.

There’s lots more on the menu, but I can’t get past the burgers. Don’t be in a hurry - burgers are cooked to order and it takes a little time to make a burger this good.

Blake’s is one of my top five burgers in the city.