DOWNHILL WARNING! Due to my change of eating habits I have not been to Lankford in a long time, a couple of years at least. My experience has been that they kitchen has its ups and downs but the murmurings I've heard from several lately have all been bad. Here, for instance, is Alison Cook's latest review in the Chronicle; I believe it was Alison's report some years ago that was the first I ever heard of the place. Sad news, if true. Well at least it hasn't been taken over by some investors who want to establish multiple locations, all mediocre, all over town. Diner beware.

OR MAYBE NOT! I haven't been back to Lankford since the above was posted but numerous sources indicate it was a false alarm. Enjoy. 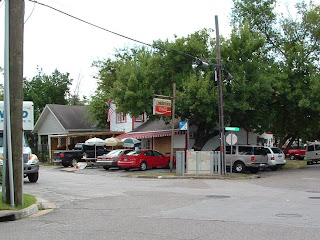 A nationally syndicated food writer, having attempted the triple meat burger at Lankford, once observed that Houston is ‘hamburger crazy.’ I feel certain that no greater accolade has ever been paid to our fair city. Lankford serves a great burger though I must admit I was not taken by it at first despite having read and heard glowing reports for months before ever making my way over there.

You see, Lankford serves an over-dressed, over-stuffed burger and I have a philosophical hang-up about burgers that start out looking like a mess rather than get that way as a result of handling, frenzied or not. In my experience many over-dressed burgers are messy to begin with because of too much mayo or mustard or (gack!), ketchup, added to compensate for meat that isn’t juicy enough, a poor way to try to achieve burger greatness. Too much lettuce is another culprit. For some time after my first visit to Lankford some years ago I told myself I wasn’t that impressed and the place was over-rated but taste buds eventually trumped logic and I found myself craving another one of those 'unimpressive' burgers and so I became a believer.

Lankford serves my second favorite burger in Houston, which is saying quite a lot; my 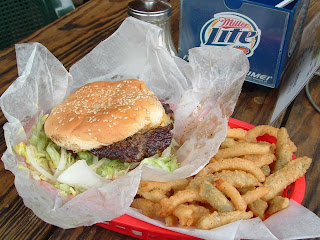 favorite is at Christian’s Tailgate Bar and Grill. Compared to Christian’s, Lankford’s burger is larger, messier, and cheaper but it’s hard to compare them otherwise. They’re both awesome burgers, no question about it. The sides at Lankford’s tend not to be as good and the kitchen does have some minor ups and downs from time to time but that doesn’t stop me from going. I can hardly finish the burger by itself, anyway, so I have no problem with leaving some of the sides untouched.

The daily specials at Lankford get a lot of good press too but the only one I’ve been impressed with is the Chicken Fried Steak plate on Thursdays, which is one of the best in Houston, if you’re lucky enough to get there and find a seat before they sell out.

Lankford Grocery
Posted by Bruce at 5:58 AM

I just found out they now close up at 3 PM Monday-Saturday (not open on Sundays) Ouch!

Limited hours has always been an inconvenience at Lankford; well, that and limited parking and seating.

Thanks for the comment Eating the Road. I enjoyed your review. My first experience was similar - I drove back and forth right by it without seeing it and finally realized it was there too late - they had closed for the day.

Now you have to come back to Houston and visit Christian's, Hubcap, Little Bitty, etc., etc.