Washington Ave., just north of I-10

A lot of things have changed at Christian’s in the years (5?) since it first became well known, almost all of them for the better. The hours have improved, although they seem to still be in flux (and being open on Sunday apparently didn’t last long). Gone is the small lunch buffet and the franchise fried chicken (Chester Fried?). The name has changed from Christian’s Totem, once one of a chain of convenience stores, to Christian’s Tailgate Bar and Grill. Gone is the truck bed by the door (and it’s apparently permanent empties). But what hasn’t changed is the burger.

One of the best things about Christian’s, besides the awesome burger itself, is the amazing consistency of the kitchen. Lankford Grocery has it’s occasional ups and downs, a patty that refuses to hold together or isn’t sufficiently caramelized on the surface, but every time I go to Christian’s (original location on Washington only), I experience exactly the same enjoyment. 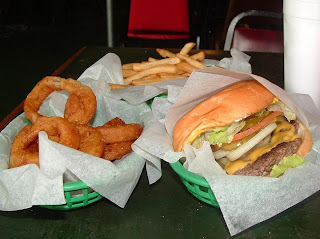 much food again. In fact, these days, I’d just have the burger, maybe some chips. There are other things on the menu besides burgers????? I read in a Chronicle poll last year that Christian’s chili is one of the best in the city, so I beat it over there to try it, chili being one of my obsessions. It’s available on a chili burger or chili fries, but you can’t get a bowl, it turns out.

Playboy has named it one of the 10 best burgers in the USA. John T. Edge of the Southern Foodways Alliance calls it a quintessential Texas burger. Heck, folks, there are close to 10,000 restaurants in Houston and probably better than 75% of them serve burgers and I haven’t tried more than a few dozen of ‘em, so, cautious gent that I am, I won’t even say that it’s the best in Houston ---- there may be a new one discovered any day now --- but it is my favorite. 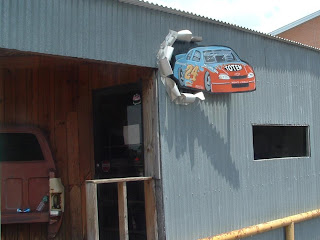 Luv Christian's burgers.. Swiss and Mushroom is a good change of pace to have. Wish there fries were a bit better. I am glad their remodeling has not changed there food.

I'm usually not fond of mushroom Swiss burgers but I bet Christian's does a good one. I can pass on the fries though; onion rings are awesome.

Actually this location is Christian's Totem..Christian's Tailgate is the uppity Midtown location. lol

I didn't realize that, thanks. I have avoided the uppity place. Not my style.

Boy was my visit a disappointment! I visited the Washington St. location this past Saturday night before 8 p.m. There weren't many people in the place - 3 at the bar, 4 in a booth, and me. I don't know if I had "tourist" written all over me or what, but I was ignored. I even went over and picked up a menu thinking that would have given the bartender or one waitress a clue. Do they close the kitchen early on Saturday night? What gives? Will I go back on my next visit to Houston and see if I can get waited on to try their burgers? I don't know...

I've always been during the day, never at night, and it's always been counter service, not table service. You order at a counter, pick up at the counter. No waitresses.

The hours always seem to be in flux. There's usually been a sign in the window, visible from the street not just an 'open/close' card, telling the kitchen's hours so I don't know when it closes in the evening but I'm pretty sure it's not open as long as the bar is.

Bummer. Better luck on your next visit.