One of the most visited pages on this blog for a long time has been my original post on All Bengal Sweets and Restaurant on Bellaire.  Hits have come from all over including the Sub-continent where I'm sure some chuckles have resulted from reading my stumbling attempts to appreciate the cuisine.  Recently I've noticed an uptick in traffic on that page nudging it from 4th on the all time list of most accessed pages to 3rd.  I finally discovered the reason:  the owner has opened this new place in the Hillcroft Plaza in the Mahatma Ghandi district and people are landing on my blog looking for information about the offerings here.  So of course I had to try it out myself. 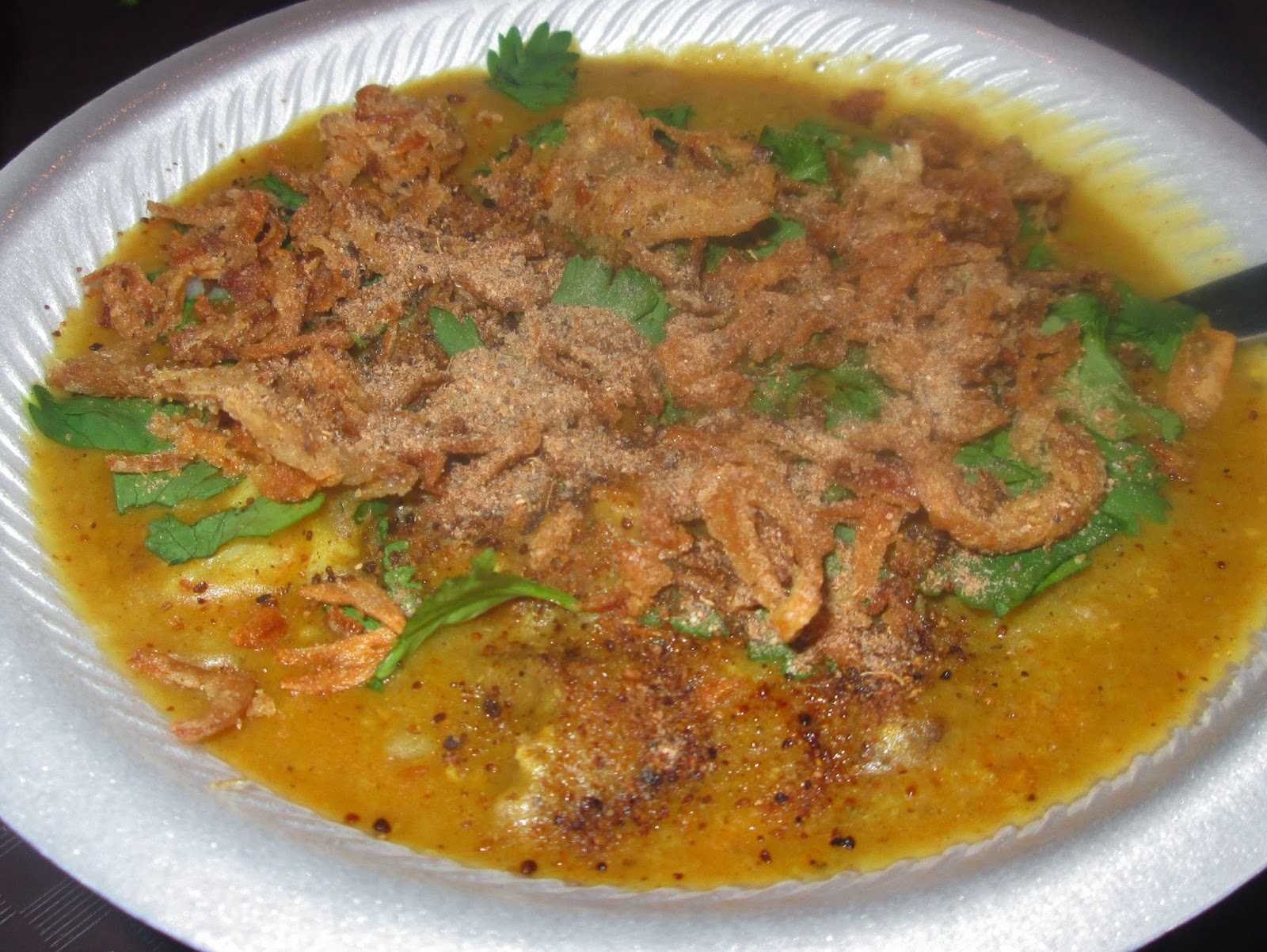 I knew they had snacks to accompany coffee and chai and their Bengali sweets but didn't realize they also had a small menu of daily specials.  The beef haleem sounded more appealing than a samosa so I opted for that on my first visit.  A small portion, a little over a cup probably and only $3.99, it was topped with lots of crispy fried onions, cilantro, and a generous sprinkling of spices.  There were some unexpectedly large chunks of fatty beef and a couple of large pieces of bone.

I first encountered India Filter Coffee at the shuttered Heritage India restaurant in Stafford after an impressive meal of their specialties from the Spice Coast state of Kerala and I loved it at first sip.  It can be produced at home in a device somewhat similar to that used to produce Vietnamese Iced Coffee but uses scalded milk and sugar to taste instead of sweetened condensed milk and is served hot.  Characteristically it should have a lot of froth on top, produced by pouring the coffee mixture back and forth between two cups.  Three kinds of coffee are offered here, Kumbakonam Degree Coffee associated with the town of the same name in Tamil Nadu and brewed with chicory, Madras Coffee and Mysore Coffee.  The latter is said to be the strongest brew.

There is also Chai and Masala Chai and a brew called Eye Eye Tea which is a blend of coffee - oops, masala chai and espresso.  I have only tried the first.  Everything I had was served in disposable containers with disposable utensils including the coffee and I didn't bother to get a picture of the coffee. 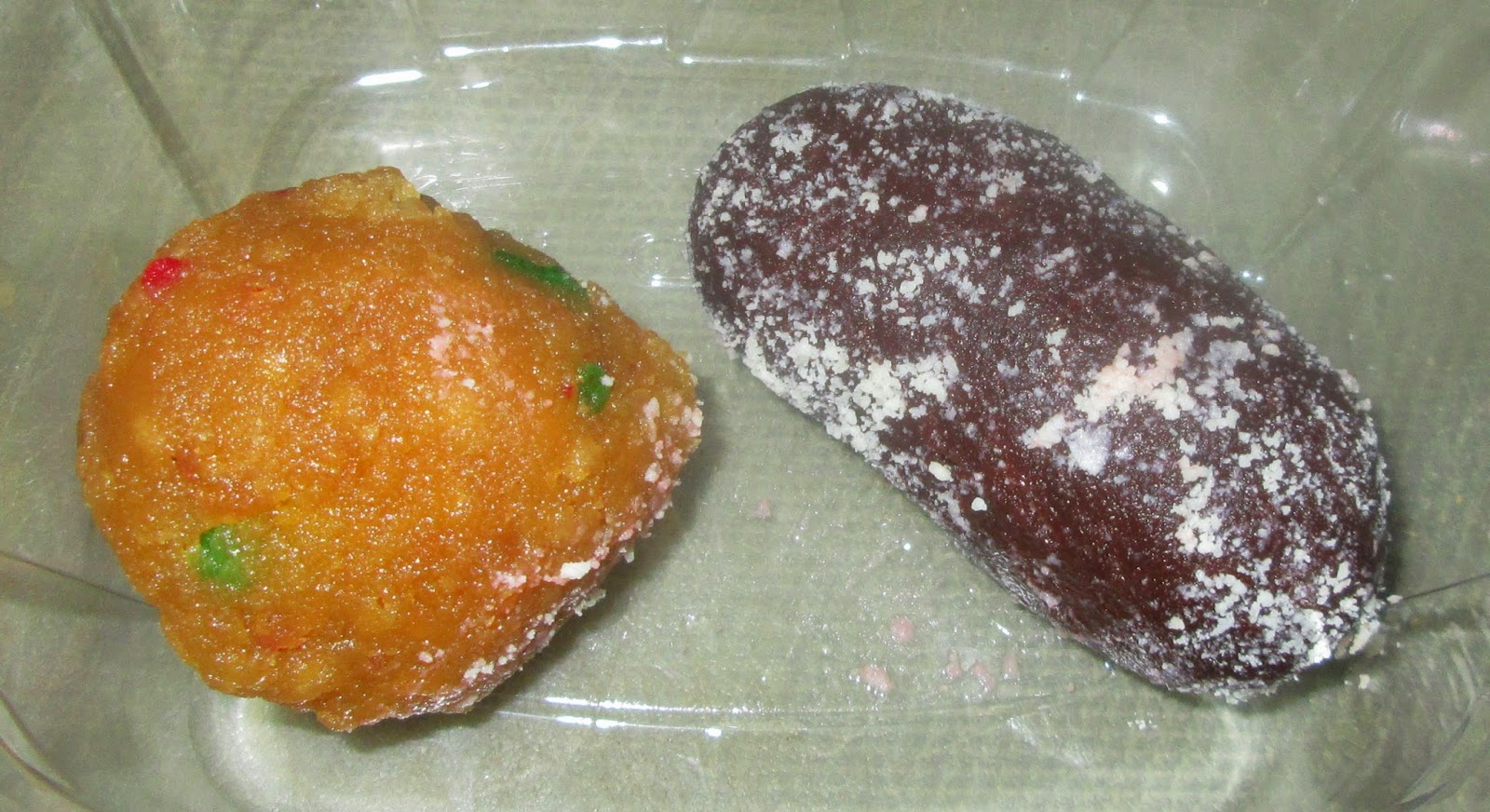 After finishing the haleem I started sipping on my coffee and dug into some Bangladeshi sweets.  I tried the rosgulla and chom chom.  The pale cream colored sweets photographed very poorly against the white of the disposable bowls but I also grabbed a ladoo and my favorite from visits to the original shop, a kala jamun, to go.  As noted in my previous post, Bangladeshi sweets are known for being very moist.  I think the chom chom has nudged the kala jamun and become my favorite. Now I only have about a half dozen other varieties to try.

Dining accommodations at the original shop were somewhat rudimentary but this shop has more style. I think it had a previous incarnation as another short-lived India coffee house and perhaps the decor is a remnant of that.  There are graphics on the wall including sayings about coffee from literature and a brief history of coffee cultivation in India.  I got distracted by the artwork and missed seeing my coffee being prepared.  Two large screen TVs are kept at low volume, making conversation very possible.

We tend to stereotype India as a tea drinking culture but coffee is popular in South India.  You can also find Indian Filter Coffee on the menus at Sri Balaji Bhavan and Udipi Cafe in the same neighborhood and at other places around town.

Ishita Unblogged, which I linked to earlier for it's excellent article explaining Bangladeshi cuisine, also has an excellent post on Bengali sweets.
Posted by Bruce at 6:39 AM