I was excited to try our first ever Burmese restaurant.  I had done some preliminary research into the cuisine but it was a couple of months before I got around to going and all I could remember was the Tea Leaf salad. 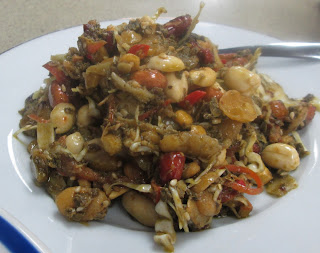 If this was all there was on the menu, it would be reason enough to go.  Unless you have problems with peanuts or caffeine.  Crispy, fried peanuts, and lots of them, pickled or brined tea leaves, a little tomato, a little shredded cabbage I think, a little ginger and garlic, oil -- I found it addictive.

I also had the whole steamed fish on my first visit which turned out to be two whole tilapia in a lime broth with lots of Chinese celery, a little cilantro, some pieces of ginger and lemon grass, I think.  I looked this up and it may actually be a Thai preparation; there are lots of Thai dishes on the menu.

I had also ordered the Burmese Pancake as an appetizer but it wasn't available (may not be on the menu any more).  Based on the quantity of food and how filling and satisfying it was it's just as well I didn't receive that. 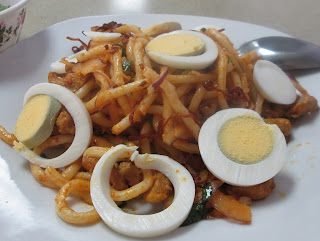 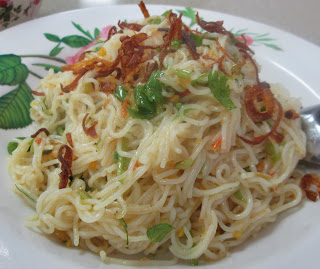 I love salads and I have no issues with any kind of salad greens but lettuce does not grow in Myanmar and so is not only not a component of a Burmese salad, it's foreign to the concept.  A Burmese salad or thoke or thohk, is centered around one ingredient with garnishes.  I tried a couple of the noodle salads.  Nan Gyi Thohk, translated as 'fat rice noodle salad' so I've read, includes pieces of chicken curry, hard boiled eggs, caramelized onions, garlic and oil and other garnishes.  The Rakhine salad (long i sound) features thin rice noodles.  Rakhine is a coastal state so this salad fittingly includes tidbits of fish; the owner said they were tilapia but I thought there was some fried fish cake present too.

I also tried the Samusa salad.  Similar to an Indian samosa chat, it featured a samusa broken up on a bed of additional curried potatoes with other garnishes, though no chutneys or dahi.  I found it less interesting that the other salads I tried and I neglected to take a picture of it.

Based on observations, it's okay to use just the flat spoon provided to eat these salads but I reached for the chopsticks.  Regular flatware is also available.  Salads are accompanied by a small bowl of broth to be consumed separately. 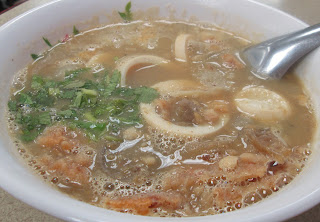 While some online articles name the Tea Leaf Salad (lahpet thohk) as the National Dish of Myanmar, virtually all name Mohinga, a fish stew that is commonly eaten at breakfast.  This is a very hearty stew, thickned with chickpea flour I think, with chickpea patties, tilapia, hard boiled egg and thin rice noodles.  The uncommon ingredient is banana tree stem.  Sometimes designated National dishes really wow me, sometimes not and I was a little hard pressed to get the appeal of this other than its heartiness.  Despite its status as a National dish, this is just listed on the menu as Rice Noodle Soup (# 1). 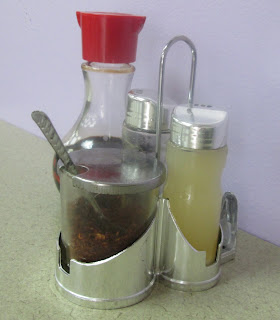 I ordered all my dishes spicy and I was not disappointed.  Burmese is not as spicy as Thai or Indian but that's okay.  Condiments on the tables include soy sauce, chile pepper flakes, lime juice and fish sauce so you can add heat if you wish.

I really loved the Burmese salads.  I just discovered cold noodle dishes a couple of sweltering summers ago and these will be favorites of mine.  There are many fried rice dishes, curries, and Thai dishes on the menu, an appetizer section, daily lunch specials, and Burmese versions of popular dishes such as Green Papaya Salad that I haven't gotten around to.  The restaurant also serves sushi.

It's a small, seemingly only three person operation so service can be slow but the owner has been very helpful and friendly.  There are legible pictures of the menu on Yelp! but I was told the menu is being revised so some listings will probably change.  I was also told they will be hanging a big picture menu on one wall to help people who are not familiar with the cuisine, plus printing up menus to go.  The current menu offers little in the way of explanation of the dishes but the owner has always been ready to help.  They're closed only on Mondays.

Kaung Kaung San is a gem in my estimation and a very welcome addition to our vast array of cuisines.

I went here on your advice. The Tea Leaf Salad was mind-blowingly good: it might be one of my favourite dishes in Houston.

I also enjoyed the Mohinga for what it's worth, though I was puzzled by the lack of actual fish in my fish soup. I had a Chicken curry that was just OK.

But like you say, Kaung Kaung San is a gem.