I was urged by a friend way up north to try this place.  It’s a chain out of Wichita and I found some very favorable comments online alleging  it’s the best fast food burger ever and better than In-n-Out.  I don’t know about that last comparison since I’ve never been to In-n-Out but the website does make it appealing suggesting Freddy’s may be Wichita’s counterpart to our own James Coney Island or Prince's as an iconic local eatery.

They smash the meat down on the grill as it fries like Smashburger, they butter their buns and serve frozen custard like Culver’s, and they call their burgers steak burgers like Steak and Shake - that’s the competition.  It didn’t take much arm twisting by my friend to get me to check this out.  I know Houston is a hamburger mecca and I have my own favorites form Bernie’s and the Burger Guys and old time standbys  like Christian’s, Sparkle’s, Someburger and Cream Burger, but I like the thin, old fashioned patties and in the heat of last summer I was willing to check out some new custard.  I don’t ever go to long established chains anymore, even Whataburger.  That’s not a matter of self-denial or self-righteousness, it’s simply that my life is very relaxed these days and the only reason I ever have to hit a place like that is the need for speed.  But I’ve checked out every other new burger franchise to come to town in recent years (except Carl Jr.’s), just to see if any of them actually have managed to re-invent the wheel and I was willing to give Freddy’s a shot.

The first location of Freddy’s opened in Copperfield almost a year ago and I was there to check it out within the first 2 or 3 days of operation; that proved to be a mistake.  They learn on the job at Freddy’s, apparently; my cashier was learning how to work the register on the job with her manager actually doing most of the tapping of the touch screen.  I also came to the conclusion whoever grilled my burger was learning on the job - the patties were pressed down as thin as tortillas and spread out much larger than the bun, not only crispy but charred around the edges.  I also misunderstood the ordering system and got a dry burger without enough condiments to make up for the well done meat.  I also noted both the meat and the fries were under-salted.

I was sure that’s not what I was supposed to get so I went back a couple of months later and had a much more satisfactory experience.  I also got to try the custard and the chili.  The chili was the most impressive item I’d had.  I got it to go and got hung up on the way home by a plant fire along 529 that had the highway completely shut down so it was just a sludge by the time I got home (all the cheese had melted) but I thought it promising; even at that stage it was better than Wendy’s or Steak and Shake’s chili. 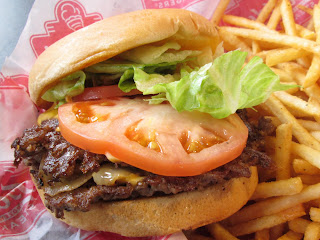 I returned recently for another round but the ordering system continued to confound me.  I’m so used to just being able to say ‘all the way’ if the toppings aren’t specified that I'm afraid I'll forget to include everything I want: on an Original Double - cheese, lettuce, tomato, and grilled onion, plus the pickle and mustard that come as standard.  The grilled onions are necessary to add a little grease to make up for the patties which have little and the others are necessary to add more moisture. They aren't apparent in the picture but they use those elongated, slightly thicker pickle slices so you should get pickle in every bite.   There wasn't enough mustard for my taste but this was a pretty good burger.  Once again both the meat and fries were under-salted.  There are salt shakers on the table and I discovered too late they have shakers of Freddy’s special seasoning on the condiments table.  I had seen the shakers for sale but there are none on the tables and only a few on the condiments table to use - that would probably help the patties and the fries.  There is also a dispenser of Freddy’s special french fry sauce, which seems to be a blend of just mayo and ketchup, to be added to the burgers or the fries for a little more oomph.  There are also bottles of Cholula.   I like the loose texture of the cooked patties and I do like these old fashioned style burgers.  I like the shoestring fries, too.  When they’re hot and fresh they are just a little gummy but as they cool off, which happens very quickly since they’re so thin, they do get gummier. 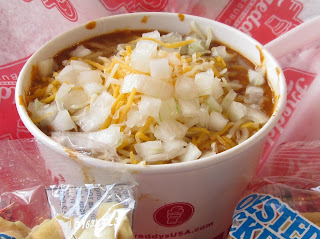 The chili, however, was a disappointment this time around.  There’s just way too much cheese added as a condiment - onions too, for that matter  - and even though not all the cheese has melted this has become a chili flavored melted cheese dish.   Somewhere in rather recent history it has become all the rage to garnish a bowl of chili with a ludricous amount of cheese and what is supposed to be a meat and spices dish has become a meat and cheese dish.  Nothing kills the spices in a bowl of chili, the cumin and the chile peppers and other spices, as quickly as cheese.  Sorry Freddy, but I’m very picky about my chili.  I still think there’s a basic chili here that’s better than Wendy’s or Steak and Shake; next time, I’ll try it without the cheese or with the cheese on the side.

Best fast food burger ever?  Naw.  I'll stick with my old favorite, Someburger in the Heights.  I can't compare this very well to the old standby chains as I haven't been to any of them, including Whataburger, in about 5 years or so.  Of the recent crop of burger franchises to come to town, however, both Smashburger and Five Guys have better meat, I think, but since I don't care for the buns at Smashburger, that leaves only Five Guys. Maybe with a light sprinkle of the special seasoning, Freddy's would edge ahead.

Another location has now opened in Katy and there's one in Bryan.  They're moving into the Houston market slower than they moved into other Texas markets.

Labels: Chili, The Burgers of Houston

Bruce, I'm glad you are still blogging. Liked your review of Freddy's. Haven't been well enough for an adventure outside of Sugar Land. I know you are the "go to" guy for food in the Metro area. I need to buy some honest to goodness pork cracklin's like you can find in Louisiana. Not the fried pork rinds but the skin and bacon. If anyone knows where to find it, it would be you.

Sorry to hear of your health problems. Also sorry I can't help you with the search for cracklin's. I've looked up every place I thought I remembered seeing them and can't find them listed on any menus. Maybe some blog readers will have some suggestions.