I first happened upon Dandanah a couple of months ago, wandering around in the Galleria area, a part of town I usually avoid, trying to find my way home after spending several days in a dentist’s chair.  When I discovered they offered Egyptian cuisine it redeemed the whole ordeal.

Some of the most common dishes served in Middle Eastern cuisine originated in Egypt, among them falafel and ful medammes, but this is the only restaurant in Houston I know of offering more of the special dishes of the country’s cuisine. 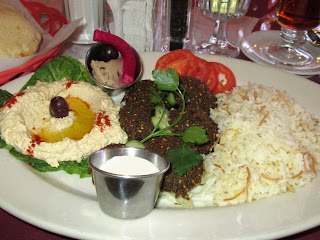 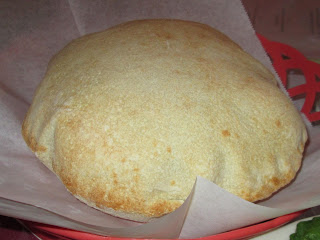 Though falafel originated in Egypt, where it is called ta meyya, the version served everywhere else differs from the original.  The Egyptian version is made from cooked, mashed fava beans instead of ground chickpeas.  The Falafel Platter at Dandanah comes with 5 rather large patties, along with vermicelli rice, hummus and pita bread.  It’s a rather generous spread for the price.  The interior texture was kind of mushy, which I sort of expected, but on another occasion, the patties had more of a fine cake-like texture.  I liked that a lot better.  A house-made hot sauce (shattah) was offered (it hadn’t arrived in time for the picture) but I found it too vinegary for my taste and anyway the creamy tahini sauce was excellent.  The falafel has a very mild, pleasant level of heat itself.  The Wikioracle says Egyptians like their hummus served with lots of olive oil and it seem the Wikiwriter got that right.  The mild Middle Eastern pickle assortment was a hit - pickled cauliflower, cucumbers, turnips, carrots, and olives - and the pita bread, fresh out of the brick oven was too.  It was still puffed up and stayed that way - it had been baked beyond the point of being pliable and the stiffness, almost cracker-like though not brittle, proved ideal for scooping up all that hummus. Unfortunately the vermicelli rice was dry and at room temp; it was a shortcoming of the kitchen I encountered on one other visit, too. 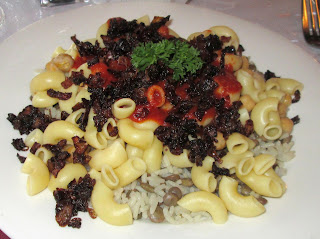 Koshari is sometimes called the national dish of Egypt, a version of the ‘mess of pottage’ from Biblical times.  Having just been wowed by the .mujaddara at Dumar’s and another version at Jersusalem Halal Meat Market, I was eager to try the Egyptian version.  The basics of the dish are brown lentils, a grain and caramelized onions.  The Egyptian version uses rice instead of cracked wheat and adds macaroni with garnishes of a tomato sauce and chickpeas.  This came with more of the tomato sauce and some of the hot sauce on the side.  The drill is to add the sauces to taste, turning it into a dish to your liking.  Apparently some people make this into a rather soupy dish but I never managed to get it adjusted where it tasted right to me.  The caramelized onions were pretty much negated by the blandness of all the rice and macaroni and I found myself wanting some more spice since I found the hot sauce again too vinegary.

There are only a couple of dishes listed as spicy on the menu but I decided I needed to try them since I prefer spicier food and the Kebda Es Kandarany proved to be just the ticket - fried liver, Alexandria style.  Fried liver is said to be a specialty of Alexandria and there probably isn’t much competition from other cities in that category I would guess.  I’ve never had either a big aversion nor big attraction to liver but it does have that stigma of being ‘good for you.’  This was easily the best fried liver I’d ever had - bite sized pieces of beef liver, speckled with bits of red and green peppers including the seeds, seasoned with lemon juice and cumin.  This came with a portion of the pickles plus tahini that had itself been spiced up a bit, and a fresh, hot, pliable pita.  Though only an appetizer it was a generous sized portion and proved to be a meal for me as liver is pretty filling. 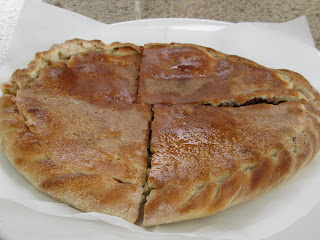 Making use of their brick oven Dandanah offers pizzas with both Italian and typical Middle Eastern toppings plus Hawawshy, the Egyptian version of pizza which is kind of a cross between manakeesh or Lebanese pizza and an empanada.  There are only two version on the menu and I wanted the special one with pastarma but had to ask if I could have it spicy.  I was told I could have it spicy or mild.  Now I’m wondering if I could have had the same options with the other dishes that I found too bland for my taste.  The filling is a typical Middle Eastern minced beef with onions and parsley such as would be used for kofta or kubideh and had some finely minced pastarma, the seasoned, air-dried beef, added, and it was good and spicy, This was the best entree I’ve had yet at Dandanah and I wish they had more varieties of Hawawshy on the menu.

There are some special beverages including Karkade, the Egyptian hibiscus tea, a deep burgundy beverage served just barely sweetened, tasting like a slightly citrusy cranberry drink but without quite the acidity of cranberry.  You can add more sugar or sweetener to taste at the table.  I had this with the liver, a generous 20 oz glass with a free refill and it’s part of the reason the appetizer was enough for a meal. 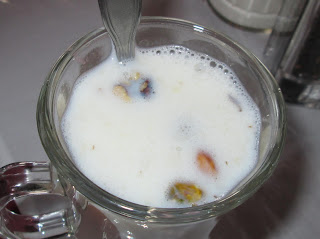 Another special beverage is Sahlab, the Middle Eastern hot drink based on ground orchid roots.  I had this with the Koshari and it arrived at the table frothy, preceeded by it’s fragrant bouquet.  The authentic ingredient is a very rare and expensive variety of orchid grown only in Turkey and most versions served are based on substitute ingredients I understand.  I’ve never had it before but it is on the menu at at least one Turkish restaurant here.  It came garnished with crushed pistachios, slivered almonds, raisins and grated coconut and it not only redeemed that meal, it made my day.  You get protein, fiber, micronutrients and some aromatherapy all as part of the package. 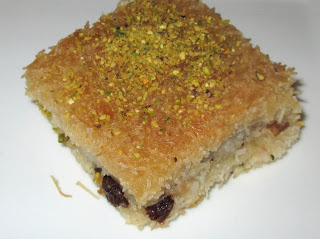 Among the deserts I tried the Konafa, the Middle Eastern cheese pastry, a layer of mild, white feta like cheese sandwiched between layers of grated coconut and vermicelli, drizzled with simple syrup, garnished with crushed pistachios and raisins and lightly grilled on each side.  I never had room to try the Um Ally, the Egyptian national desert, variously described as a raisin cake or bread pudding.  I understand it is made with phyllo but I was told it needs to be consumed hot and doesn’t travel well or I would have gotten some to go.  I’ll have to make a special trip sometime just for desert.

The menu includes lots of the more standard dishes of Middle Eastern restaurants including schwarma, kofta, kibbeh and the like but in keeping with the focus of this blog I stuck to the cuisine’s special dishes.  There’s a very pleasant patio overlooking Fountainview, sometimes heavily perfumed from all the hookahs.  The restaurant has a couple of times been short on servers.

Dandanah Cafe and Grill
Posted by Bruce at 5:04 PM

They said outstanding review? I found several things mentioned in the review that were bad. I would not have posted it as a raving review on Facebook for all to see. I don't care for the owners of the establishment, hence I won't be visiting any time soon. Or ever.