AUGUST, 2014 - MANDI HALAL IS CLOSED.  MAY HAVE RELOCATED AND RE-OPENED AS HOUSE OF MANDI, 8403 ALMEDA @ HOLLY HALL IS A NEW RESTAURANT FEATURING YEMENI CUISINE, REVIEWED ELSEWHERE ON THIS BLOG.

JUNE 7, 2013:  THIS RESTAURANT IS NOW KNOWN AS MANDI HALAL RESTAURANT.  WHETHER THIS MEANS A CHANGE IN THE MENU OR NOT I DO NOT KNOW.

CHECK IT OUT FOR YOURSELF:  MANDI HALAL

ON ZABIHAH.COM THE RESTAURANT CLAIMS IT'S MAIN FOCUS IS SOMALI, YEMENI AND SAUDI FOOD.  JUDGING BY THE PICTURES ON FACEBOOK, THE PLACE HAS UNDERGONE QUITE A RENOVATION.

All of the buzz about Houston’s dining out scene in recent months both nationally and locally has been about the emerging chef-driven restaurant scene inside the Loop.  But Houston’s stature as a fantastic place to experience ethnic cuisines as offered by small Mom and Pop restaurants hasn’t gone away, it continues to grow and mature.  Last year I was thrilled to find several restaurants offering regional variations of Indian cuisine; so far this year, it’s been the Middle East and Africa.  In just the last couple of months I’ve come across Syrian, Egyptian, Yemeni, Turkish-Italian (I think that’s what the guy said) and Somali places that are new to me, anyway.

I guess I’m like most Americans in that I know very little about Somalia and most of what I know has come from the headlines over the last 15 years or so and hasn’t been positive.  So I was surprised when I started to read up on Somalia to learn that because of its colonial history and location on a major trade route, Somali cuisine over the centuries has been influenced by several of the world’s most notable cuisines including Italian, Turkish, Ethiopian, Indian and Chinese.  Both rice and pasta dishes are served, sometimes on the same plate which are known as Federation dishes. The cuisine is an un-like the foods of West Africa as Tex Mex and Scandinavian and even bears little resemblance to neighboring Ethiopia.

East Africa restaurant has recently undergone a change of ownership and its menu is in flux.  There are no printed menus and many of the dishes listed on the menu board are no longer offered.  Sharwarma, a couple of Eritrean stews - zegnis - and moofu, a Somali version of cornbread are some of the dishes I wanted to try but couldn’t.  Much of the menu uses English only; there are relatively few Somali terms used and the two young men who run the place both speak good English and are very easy to communicate with and ask questions. 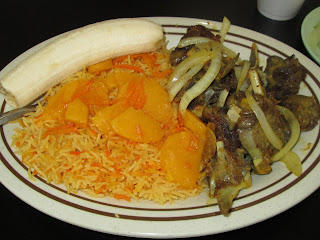 On my first visit I was told goat is a specialty so I went with a goat dish, Goat and Rice.  This was also available with spaghetti but I was told more people order it with rice and it appears to be a common dish at Somali restaurants elsewhere.  The goat is so good, I wound up having something with goat for all my visits except one.  If I hadn’t been told it was goat I would have guessed it was lamb.  When I first looked at the plate I thought I was going to be experiencing some mango/banana rice, which sounded very interesting, but alas it was just slices of potato on top; I thought the potatoes were superfluous but otherwise the rice was excellent.  They do as good a job with the rice here as they do goat.  This came with a small, simply dressed salad and a beverage of choice - I went with the Somali tea., shaah.

Bananas are a regular accompaniment to Somali meals, presented on the side, unpeeled.  I was saving them for the end of the meal, even taking them home, but then I read a Somali blog and learned the banana is usually eaten along with the meal, alternating bites or sometimes even mixed in with the rice or pasta, the sweetness of the fruit serving as a counterpoint to the savoriness of a dish or a hot sauce which here is a house-made concoction with jalapeno, garlic, lemon and cilantro I believe.  The Somali blogger said rice or pasta without a banana just didn’t taste right and the proprietor of East Africa said probably 95% of Somalis eat the banana with the meal but he personally prefers to eat it at the end.  Some of the customers I’ve observed have taken the banana with them when they left and others have gone off and left it on the table.  I suspect this may have something to do with the quality of bananas available here vs. those in Somalia.  More about Somali bananas below. 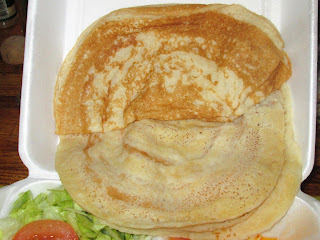 On another visit I stopped by after running some errands and was anxious to get home with threatening weather making its presence known so I grabbed Angelo and Chicken to go.  Angelo is one of the staple breads of Somalia, usually compared to the Ethiopian injera.  It is also spelled with an ‘r’ instead of an ‘l’ and with a ‘c’ in front as in canjero or even canjeero.  Though it resembles injera there are significant differences - angelo is made from wheat flour not teff, it is smaller in diameter, about 9 inches vs. 13 or so, and it is thinner.  The elastic properties of wheat make this possible and angelo is less likely to disintegrate in contact with a wet dish like a stew and doesn’t tear as easily.  It is also fermented a lot less than injera, typically only a few hours or a day and so is noticeably less sour.  The angelo here has a little sugar in it and contrasts even more with injera.  It is used sometimes as a plate like injera and also as a utensil, it may be eaten alongside a meal or just by itself as an accompaniment to tea, especially for breakfast.  It actually is more comparable to a crepe than injera, I think, and it really made this dish.  There are four pieces in the picture.  A couple of pieces of this would make a very good snack with a cup of sweet and spicy Somali tea. 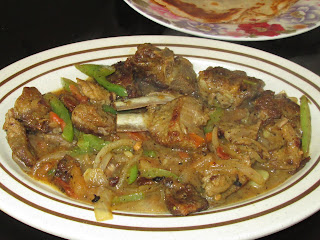 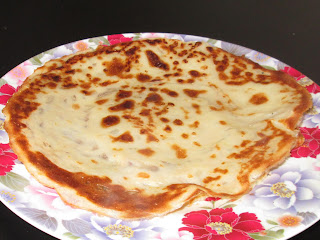 The other bread served at East Africa is malawah (also spelled malawax).  From the spelling and composition this is obviously related in some way to the Yemeni malawach which I encountered at Saba’s Kosher Café on Fondren.  Brought to Israel by Yemeni Jews malawach  has become very popular but whereas malawach is a layered bread made from multiple layers of phyllo like sheets and fried (and picks up a lot of grease in the process in my experience) and thus is comparable to Indian paratha, Somali malawah is served in single sheets (there are four on the plate).  The batter contains some egg and more sugar than angelo.  This is listed on the menu board with beef and maybe chicken but I asked if I could have it with some more goat.  I used the malawah as a utensil, pinching up the food and bringing it to my mouth. The combination of the savoriness and saltiness of the meat, the still slightly crisp vegetables contrasting with the slight egginess, caramelized sweetness and crispness of the malawah made for some of the tastiest mouthfuls I’ve had so far this year.

I did not know that bananas were grown in Somalia but I've learned Somali bananas are known for their sweetness and are highly prized in Italy and Saudi Arabia.  Banana production has been decimated in recent years because of the civil unrest, piracy and the lingering effects of an El Nino, but efforts are underway to rejuvenate banana production. Still it’s unlikely we’ll ever be seeing Somali bananas here in Houston.  My one experience with eating the banana along with the meal was not very satisfactory; the banana was a little past prime both in terms of texture and flavors.  But I plan to try again, maybe with a different variety of banana such as a red banana or a burro from Mexico.

The restaurant is back from the street in a u-shaped shopping strip that also includes the Honduran restaurant Coquitos, a 24 hour Central American/Salvadoran restaurant Mondongo, a Desi game room, Sheikh Chilli's and the Pakistani grocery store Gulshan e Iqbal and formerly housed a location of the Pakistani sweets shop Dilpasand Mithai.  The menu board includes some breakfast dishes but I don't know for sure that the restaurant is open for breakfast under the new ownership.
Posted by Bruce at 3:00 PM