See Part 1 or Part 2 of this report here. 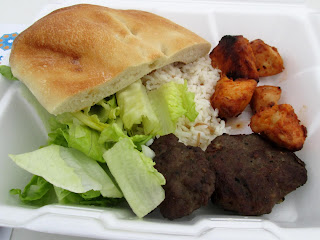 The last day of the festival brought a big drop in the temperature and a lot smaller crowds.  I was planning on trying the Uzbek palov but when I got a look at the skimpy amount of meat each plate was getting, I decided to pass and went for a plate from the Azerbaijan courtyard with chicken kabobs, beef and lamb meatballs, rice, salad and pita.  I had wanted one of those ribs. 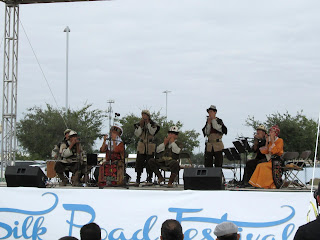 I found a seat in the Kyrgyzstan courtyard to catch a little of the musical group that was performing.  I hadn’t paid any attention to the entertainment schedule in planning my visits and I had extraordinary bad luck in catching only parts of performances.  I finished my meal and took a picture as a number started.  At least one of the performers was playing an instrument that sounded rather like a kazoo but otherwise there wasn’t much going on in this picture.  The woman on the end on the right had been playing a large violin like instrument in the previous number; it’s on the chair next to her in this picture. 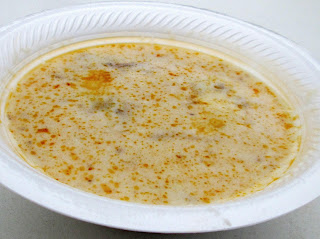 After the performance I went back to the Uzbek area to try some soup.  I had been planning on having some and the cooler weather made the timing right.  There were four to choose from including yogurt and lentil soups but the one I wanted was the tripe soup.  It was easily the most adventurous offering from any booth.  I tasted a sample and I was sold so I had them ladle up a bowl for me.  They offered to add a garlic and lemon sauce as an extra; I thought the soup tasted fine as it was but said I’d take a little of the garnish.  They they offered a plate of lemon wedges.  Just to be polite, I took one.  I was a little slow on the uptake - I came to realize shortly that those condiments would have really helped to cut the richness of the soup.  It was very heavy and filling, much more so than I expected.  The sign said it included hooves and tripe and garlic; I think I got maybe one small piece of very tender tripe.  The meat was a relevation; I assumed it was cow's foot and stomach and I’d never had cows foot before.  It was tender, reminding me of cachete or cabeza, and tasted more like lamb that beef.

I wrote down the name of the soup - kelle paça çorbasi - and when I got home looked it up.  If I got the name right and the Google translations are correct, its a Turkish soup made with sheep’s head and/or trotters, as best I can decipher. Whether it was tripe or heads and feet, ovine or bovine, it still was the most adventurous offering at the festival that I saw and I’d gladly order it again. 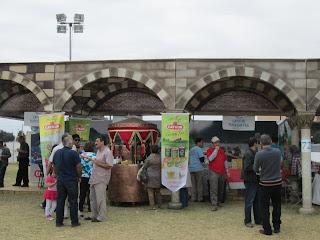 The PA system was heralding an award winning performing group taking the stage in the Turkish courtyard so I headed over that way.  Up until now the Caykur Turkish tea stand had not been very busy but with a nip in the air, at least by Houston standards, there was a steady line of customers and they were passing out the free cups of hot tea right and left, as fast as they could pour them. 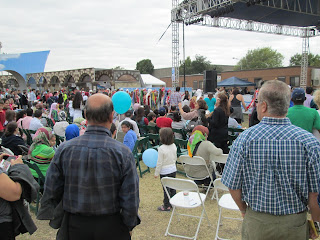 I settled down at another table to sip my tea, almost ready to doze off from the rich soup.  Before I finished the tea and after only two numbers, the performing troupe started filing off the stage.  What the?  But they assembled in front of the stage and the PA announced they would be performing a dance in a circle and inviting members of the audience to join in.  I snapped a picture from back in the crowd and was ready to call it a day.

It was a very successful festival as far as I was concerned.  I had avoided lingering around any of the arts, crafts or travel booths, etc., since I didn’t have any money to spend, but there was a lot more to the festival than I’ve reported on here, including lots more performances.  I understand the organizers were hoping for an attendance of 50,000 as a benchmark, to evaluate whether it would be worth bringing the festival back for another year.  I hope they achieved that.  I wonder how many attended the first year of the Greek Fest?  Given a couple of years to grow, this could easily be one of the premier festivals of the fall season.

The festival has uploaded a number of videos to YouTube and there are also quite a few uploaded by individuals.  I haven’t watched them all but from what I have seen, there’s a lot more of the performances and glimpses of the other vendors and very little about the food, so if you’re interested in more of that aspect of the festival, check them out.  It’s fascinating to see how much media attention the festival attracted in non-English speaking, non-Houston based media.

Silk Road Festival website
Posted by Bruce at 5:59 AM