See Part 1 of this report here.


I didn’t get to the Festival on Saturday as early as I had planned as something came up at home that had to be dealt with.  I had a small lunch at home to tide me over so I wasn’t very hungry.  Saturday was a much busier day; the parking lot was a lot fuller, the walk to the gate much longer, the lines at the stalls longer, too.  There were a few stalls open that had not be in operation in Friday, among them a Firehouse Pizza stall in the Azerbaijan courtyard, for those who were gastronomically completely at sea along the Silk Road.  There was a little bit of a break in the weather but not much and it was still stifling on the festival grounds.

I headed straight for Turkey and started the day with the manti pictured in part 1 of this report.  The lamahcun I had on Friday had been the equivalent of an 8 or 9" pizza and quite filling; the Manti proved to be quite filling too - that was full fat yogurt and the garlic sauce was very oily as you can see in the picture.  The dried herbs out of a big shaker bottle might just as well have been confetti, unfortunately.

I strolled through all the courtyards again, to refresh my memory of what was available specifically looking for the stall that featured Vegetable Delights.  I had been happy to see the stall specializing in salads in Turkey and also this one, which was in the Uzbek courtyard.  Uzbekistan had a very nice line-up of stalls; besides the vegetable one, there was one featuring Pplov (rice pilaf), which is the signature dish of both Uzbekistan and Azerbaijan, where it is known as plov.  There were also samsas, Uzbek meat pies, and a soup stall, offering four soups that looked tempting. 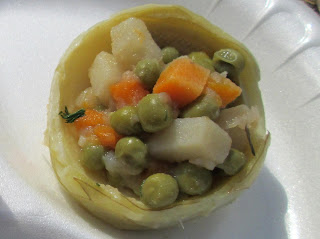 At the vegetable stall, they had stuffed eggplant, stuffed red and yellow bell peppers and stuffed artichoke hearts.  The artichoke was the best of the three, and huge. That was the biggest artichoke heart I think I’ve ever seen.  The choke that came out of must have been the size of a grapefruit, and mine wasn’t the largest one in the tray. 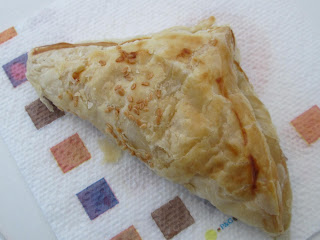 The samsa needs no explanation.  This was a simple ground beef mixture in phyllo dough with sesame seeds.  In Uzbekistan, the filling might have been lamb or horse meat. 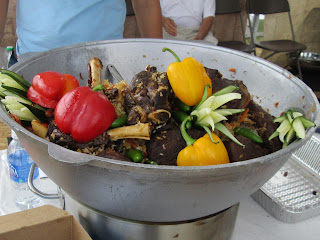 I drooled over the palov and resolved that I would stick to snacks on Saturday and devote Sunday to trying some of the full plate offerings, possibly getting several to go.  The meat in this was mutton, I think.  The tray next to it held what was probably a vegetarian version of Palov although the sign identifying it was missing. 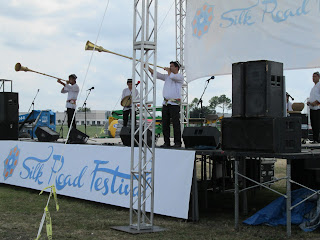 As I was munching on the samsa, a couple of men started blowing on their karnays on the entertainment stage.  These long brass instruments could probably be heard all over the festival grounds as they pointed them off in all directions and moved them around in what I think is somewhat ceremonial fashion.  They were joined by a rhythm section consisting at first of the man on the frame drum called a doyra (think oversized tambourine minus the zils) in the center of the picture and the man on the pot drum at the right rear.  Later another frame drummer entered the picture. 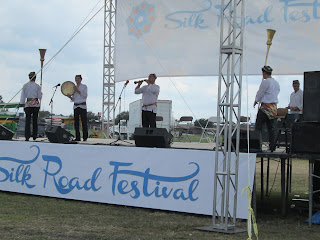 As the number built in intensity, they demonstrated some versatility in the use of the karnay incluiding one of the players keeping one aloft by balancing it on his jaw.  They were joined by the man playing the Zurna, a reeded, clarinet-like instrument.  The ensemble was completed when a woman in a very elaborate costume came onstage and fronted the band as both singer and dancer.  It was a very lively, driving and catchy number, by far the most captivating musical number I saw at the festival.  I hadn’t heard an announcement but if the festival was running on schedule, this should have been the group just identified as ‘Uzbek Local Music Group.’  I didn’t know we had a local Uzbek community but maybe that’s not the way that should be read.

Throughout the festival there was a crew on hand with professional video equipment including a camera mounted on a crane so they could see over crowds.  They may have been from Ebru-Tv, one of the sponsors of the festival.  Anyway, there were also many other individuals with less sophisticated video cameras and I’m sure some videos are going to show up on YouTube.

I liked this performance so much I wanted to see a re-run so I planned my visit on Sunday when the scheduled said they would be performing again but, alas, they were no where to be seen.