This blog has been in a comatose state for a couple of months now.  Partly that’s because there has been an unusual run of unexpected big expenses involving the maintenance of Villa del Bob and it’s inhabitants this year.  The budget for dining out has been tight and  I have felt less like taking a chance on something unfamiliar than I usually do.  It’s also because I got an induction cooking unit and am once again finding cooking fun.  Just one new toy in the kitchen, and a couple of shiny new pots to use with it, and my whole attitude has changed and I frequently decide to stay in and cook rather than go out

But Houston’s first ever Silk Road Festival caught my attention.  It offered the chance to experience the culture, music and cuisine of six countries - Azerbaijan, Kazakhstan, Kyrgyzstan, Turkey, Turkmenistan and Uzbekistan.  Of those only Turkey is represented on Houston’s dining scene   Plus it was being held in my neck of the woods, at the Stafford Centre.

I bought a four day pass and managed to make it out three of the four days.  Thursday and Friday were school days and there were scads of school buses and hordes of middle school students.  I skipped Thursday and went on Friday, Saturday and Sunday.

Although a couple of vendors told me one of their items was ‘home-made,’ the overwhelming majority of the food served was professionally prepared.  Several Turkish restaurants had a presence, among them the relatively new Nazif Grill and DNR Grill.  Café Pita, our Bosnian restaurant, operated stalls in both the Kyrgyzstan and Turkmenistan areas but as far as I could tell they were serving dishes from their restaurant menu including the popular cevapi.  But Turkish Kitchen in Sugar Land was omnipresent, operating food stands in all six countries and in the case of Uzbekistan, which was my favorite new cuisine discovery, all the food offered was prepared by Turkish Kitchen.  The restaurant is located on 59 right at Highway 6 and I’ve been to it just once.

I’ve eaten at several of our Turkish restaurants but am by no means an expert on the cuisine.  All I know about the other cuisines is what I’ve read online in the last couple of weeks so this is intended to be mostly a pictorial with minimal explanation or commentary. 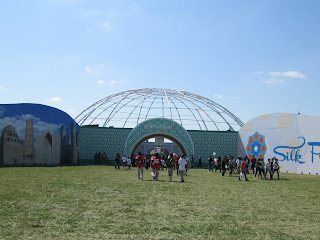 The festival was arranged in an arc around a central courtyard accessed through a Grand Entrance.  From there you could pass to each of the countries.  You could also go directly from country to country in an arc but the only signs indicating what country you were in were at the entrance off the main courtyard.  Sometimes none of the stalls had identifying signs either so you had to consult a map.  I got lost often and frequently had to consult the map to figure out which country I was in. 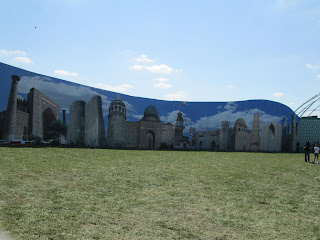 This panorama just outside the Grand Entrance and others like it along the walls of the courtyards within were popular spots for taking pictures.

I started in Turkey, having failed to notice the entrance to Turkmenistan just inside the main entrance.  By far the most popular food at the festival were the skewers or kabobs offered at several stalls.  Lines at those were always long and slow moving - the skewers were being cooked on grills out behind the stalls and they were always running behind, it seems.  I wouldn’t be surprised if the wait surpassed 45 minutes in some cases but I don’t know as I don’t like standing in line waiting for food and so sampled none of the kabobs. 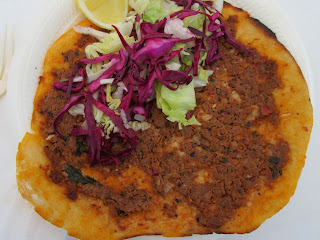 Another very popular food item was the lahmacun.  This is usually translated as Turkish pizza on restaurant menus as it was here.  It consisted of  spicy meat on a soft, moist and pliable bread (pide), garnished with shredded red cabbage and lettuce.  Given the circumstance and the lack of a knife to cut it, I ate this folded over as an over-sized Turkish taco (or New York style pizza) as did many others.  It was among the best things I was to have all weekend. 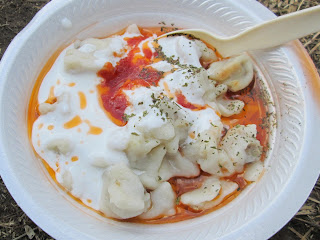 Another item from the same stall (operated by Turkish Kitchen) was the Manti, translated as Turkish Raviole but more like tortellini - meat stuffed small dumplings in a yogurt and garlic sauce.  This was apparently so popular that by Saturday, Turkish Kitchen had signs on all their stalls throughout the festival that bags of these, frozen, were available for sale. 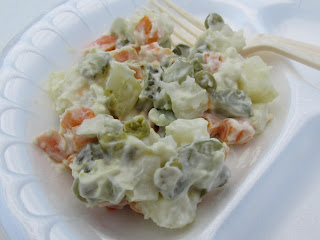 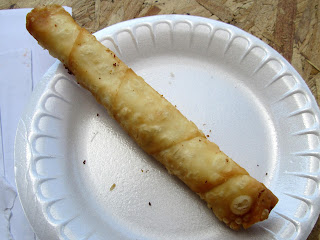 One of the other stalls in Turkey (Turkish Kitchen) offered a choice of several salads and there was another booth devoted to sweets. I don’t have much of a sweet tooth and though I was tempted I tried no sweets all weekend but on the first day I also had the Salatsie Rus (Russian salad) and, from the Turkish Kitchen booth in Turkenistan, the Kalem Boreki - cheese and parsley wrapped in a flaky dough and deep fried. 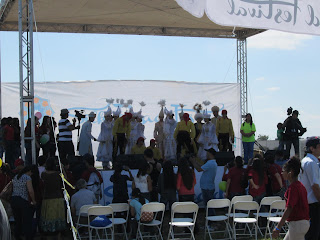 While I was making the rounds I walked into the Kazakhstan courtyard just as a performing troupe was winding up their number and milling around on the stage.  I snapped a couple of quick pictures, checked out the food booths so I could plot the rest of the weekend’s eating experiences and moved on.  I looked back to realize the group had assembled in a formation at the front of the stage to pose for all the assembled photographers but I couldn’t get back in time to take a better picture.  There were lots of performances scheduled on the various stages but it wasn’t continuous, at least during the day, and I was never able to catch an entire show.

The biggest negative at the festival was the lack of shade and with the temp at least in the upper 80s on Friday and little wind it was very hot.  There were umbrellas shading all the tables but people of all ages were seeking refuge in the archways separating the various courtyards which were at least twenty feet deep and had alcoves off to the side with some placards with information about the country or the trade route.  Although I hadn’t stayed as long as I had intended I called it a day.