Lunch at The Center

I don’t follow the food trucks as much as I did a year and a half ago.  It was brand new, cutting edge back then but the excitement and newness has worn off for me as it’s become a very trendy thing to do.  The repetitive drive into the Hallowed Heights or Montrose, coupled with the occasional disappointing offering, has made me cut back quite a bit.

Fortunately, someone at this complex of buildings between Beechnut and Gessner on 59 has been arranging to have some of the trucks put in lunch time appearances and I’ve caught up with a couple I’ve been wanting to try just a few blocks from home.  The address given isn’t even visible from the Freeway or frontage road but actually faces a side street called Tybor.  Once you find it there’s plenty of parking and even a few trees to provide some shade.

This is a new Houston unit of a popular Austin truck offering ‘Mexican Cuisine with Korean in the Middle’ and they made some of their very first stops in Houston at The Center.  The Coreanos in Austin was recently named one of the best 10 food trucks in the nation by the Smithsonian.  What?  Really?  The Smithsonian actually sent out tasters to dozens of cities and sampled hundreds of trucks?  Yeah, right.  Okay, not to take anything away from these guys, because the food is good, but they got extra points just because they were in Austin, let’s face it. 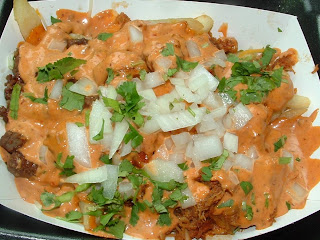 I went for a special on my first visit, Three Wise Fries.  This is pork belly (on the left), marinated chicken (in the center) and beef short rib (on the right), on a bed of fries with cheese, onions, cilantro and their El Scorcho sauce.  I managed to extract a couple of the fries sans any condiments and they were quite satisfactory; the pork belly was a bit overdone but otherwise this was quite a feast. 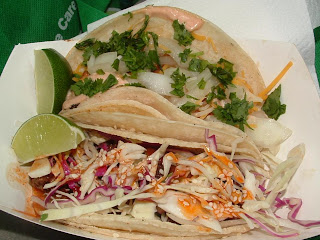 I went for something simpler the second time I caught up with them since I could do without the fries even though they were quite good - a couple of the regular tacos, one with the marinated beef short rib, which had been my choice for best of the Three Wise Fries combo, with a Korean slaw with a sweet sesame dressing, and a marinated chicken taco with cheese and El Scorcho sauce.  This time it was the short ribs turn to be a little overdone and the chicken really shone.  I remember the Asian Slaw on Fusion Taco’s tacos as better than this but that Houston food truck pioneer has apparently pulled off the road and parked it.  I do recommend the El Scorcho sauce on everything but it isn’t really all that hot.  Are Austininnies a little wimpy when it comes to hot sauces?  Guys, you can turn it up here in Houston.

This is another one of the very new trucks offering Asian fusion fare I was really happy to have a chance to sample.  I only managed to catch up to them once but will look forward to trying some of their other offerings in the future. 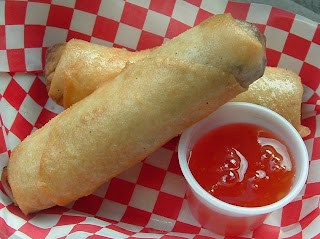 I went for their Philly Cheesesteak egg rolls - couldn’t help myself, had to check it out.  There aren’t any good Phillys on this side of town and it’s been a long time since I’ve had one so a craving instantaneously set in.  Beautiful to behold they were not as impressive taste-wise, unfortunately, and left me wanting to know what these guys could do with a more traditional egg roll and wondering if I’m ever going to find a good Philly on this side of town. 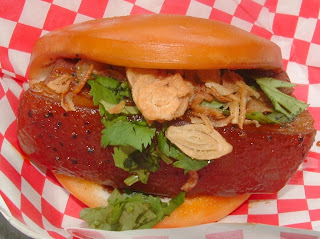 My disappointment over the egg rolls however was more than compensated for by the Braised Pork Belly Bun, served in a lightly fried bun with cilantro, green onions and fried onions.  The lightly fried bun was a very nice finishing touch to a very good slider sized sandwich

There have been other trucks make the harrowing trek outside the Loop without falling off the edge of the earth but I haven’t caught up with any of them yet.  There haven’t been any for a couple of weeks so I hope the program hasn’t ended.  I’ve seen on Twitter recently where some of the trucks have been putting in appearances way out on 290 and I think that’s a very positive development on the food truck scene, letting people outside of just a few neighborhoods experience how good the food can be.

The crews on both these trucks were super nice and I appreciate not only their coming out but also whoever at The Center has been arranging these appearances.  I’m hoping more food trucks will make the trek out on the southwest side in the future, if not to the Center to some other venue, some of my favorites like Bernie’s, Good Dog, OMPP, HtownStreats?  I guess I’m already too late to get something from Htown before their endearing paint job is destroyed in the name of commercialism but I’d still like to see them.  Let me add to my wish list some of the new ones I’m really wanting to try - Happy Endings and one that only hits the streets this week, the Sirena Seafood Truck (a mermaid roams the streets of Houston).

Ladies and Gentlemen, start your engines and come on down.
Posted by Bruce at 11:42 AM

Interesting, I used to office at 8323. The IRS is right across the street. What time do the trucks start to show up?

Usually 11 am til 2pm, Wednesday or Thursday, but there hasn't been one for 3 weeks now that I know of. You have to find out by following the trucks on Twitter to determine their schedule.

I could walk to these! I really like Coreanos. I tried them out in Austin and in Houston, with good results.

I sure wish they'd continue the program but I haven't been aware of any for over a month.