I used to like to brag about the unique TexChick, the little Puertorrican restaurant in Montrose. It was, I would tell out-of-towners, probably the only place in the world where you could get a chicken fried steak, and a very good one, with a side of mofongo, or an order of bacalao with a side of crispy, golden onion rings. The couple who took over the neighborhood hamburger joint in the 1980s wisely kept not only the name but the American food menu to hold on to what customer base they had, just in case their Puertorrican fare did not go over well.

The couple has since retired and the restaurant is in the hands of descendants and I haven’t been in several years and I don’t know if the dual menus are still available but I’ve since learned there are many other examples in our city of restaurants that feature dishes from more than one cuisine and do a good job of them. We’re not talking fusion here, we’re talking distinctive dishes from more than one cuisine. There’s Hoagie’s and More on Bissonnet, a shop offering pho, banh mi and pupusas and many a Mexican or Central American panaderia offering donuts and kolaches along side the churros and pan dulces. And there is M & M where the two Ms stand for Mexican and Mediterranean, where the appetizer menu offers chile con queso, chips and salsa and guacamole plus hummus, falafel and foul. You can have tacos, enchiladas, chimichangas and fajitas or shish kabob, kafta, or shawarma brought to your table by servers several of whom must surely be someone’s Lebanese or perhaps Saudi mothers or grandmothers.

My first visit was on the day the Texans made their debut in post season play. The tiny restaurant (with very tiny parking lot) was jammed with people wearing Texans jerseys plus one guy in a # 34 in Columbia Blue and every customer was getting a complimentary slice of Go Texans cake, a Texas sheet cake decorated with Texan’s colors and logo. This seems to be a very popular place to grab a bite before a game. After scarfing down the freebie, I went with an order of foul. 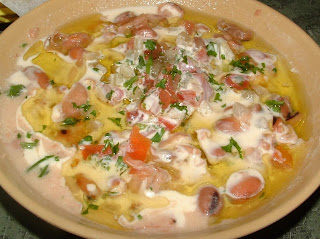 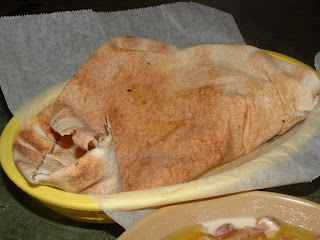 I didn’t even know this dish existed a couple of years ago and now I seem to see it on menus everywhere and I’ve come to treasure it as comfort food, just like the Pharaohs supposedly did. This version was described as a salad on the menu and I’ve had it presented such that it looked just like refritos or like Texas Caviar with fava beans instead of black-eyed peas but this was really a warm soup and so good. The fava beans, mostly still whole, had been dressed with lots of lemon juice, olive oil and tahini with diced tomatoes, and minced, still crisp bits of onion and parsley, accompanied by a very large, warm, thin and pliable pita. On top of the sugar bomb of the thickly iced cake it was all I could handle though I did look longingly at many of the other dishes being brought out and couldn’t help but notice the most often served items seemed to be burgers.

Yes, they ought to add another letter to the name, A to stand for American (or another M to stand for aMerican?), for besides the burgers - there are twelve listed - there are also wings, fries and onion rings and a Philly. 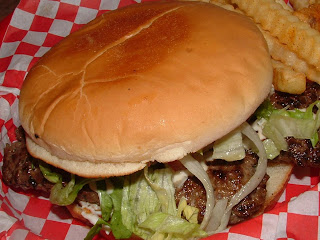 On my second visit I gave into my curiosity and went for a burger, but not the Swiss Mushroom or Mango Habanero, I chose the Kafta Burger, 2 kafta skewers on a bun with mayo, tahini, just a drizzle of mustard, plus lettuce, tomato, pickle and onion. The two kabobs, about 4 oz. each, were grilled with some nice charring, the minced beef mixed with minced onion and herbs retained a lot of its moistness and the burger was very juicy. I worried that it would fall apart and it did, one of the loosely packed kabobs breaking up after a couple of bites. I also worried that the bun would disintegrate from all the juices and condiments but it didn’t. It was a very sturdy though only store-bought bun and held up through out instead of becoming a soggy mess between my fingers.

The fries, of the frozen, crinkle-cut variety, though looking well-seasoned were in need of salt and were undercooked, lacking any crispness on the exterior and mushy on the inside.

I seem to be regularly reminding readers of some of my tried (or trite) and true conclusions in recent reports so here’s another one: if this was in my neighborhood, I’m sure I’d be a regular. I don’t roam all over the city as much as I used to a couple of years ago but I’m happy to keep finding little neighborhood places like this with good food that I wish were more convenient to me. This is a little far away from where I live to be a regular haunt and isn't destination dining, but if you’re in the Med Center/Reliant Park area, needing a nosh and prone to avoid the Usual Suspects, national and local, and particularly if you like friendly, family run places with good, unpretentious food, you should give this place a try. There are many items on the menu to try and I haven't sampled any of the Mexican items.

Most of the parking is out back and requires negotiating a narrow alley frequently lined with cars. A small mosque next door also has a tiny parking lot and when prayers are underway, the shoulders on both sides of Almeda are lined with vehicles.

Try to remember to check out the specials listed on an erasable board sometimes on the counter, sometimes just inside the door. I’ve missed it a couple of times until after I’ve ordered and am sitting down or I’m leaving. I don't remember the exact name they had but on that first visit it was something like a Whoopass Bengalese Burger while on a recent visit I learned on the way out I could have had Kabsa and Chicken. Kabsa is usually considered a Saudi dish though it is served in several Arab countries and is similar to biryiani.

Edit to add:  Since posting this I have learned there is a community of Gulf immigrants including Kuwaiti, Saudi and Yemeni in the area south of the Medical Center, the neighborhood where M & M is located. I understand on weekends it is common for the restaurant to have a daily special of a Saudi dish.