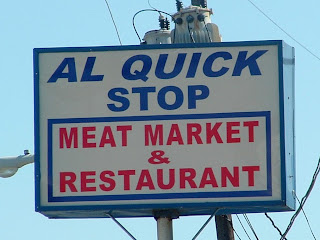 I’m sure this little corner grocery was in existence umpteen umpteen years ago when I lived near Cherryhurst Park but I never went in. The menu says only since 1991, probably meaning the popular eatery inside the store. I’ve been hearing about the latter for years and wanted to check it out but I seldom get back down to the ‘trose.

It was 8 months ago when I found myself close by and decided to try it out. Though I’d heard most about the gyro when I noted the spit was not turning nor glowing I opted for a falafel plate with tahini and relish. 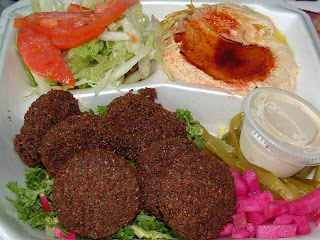 My first thought on getting a good look at the finished product - uh oh. That’s not the color I like to see when I behold falafel and just as I expected the exterior was too crusty and overcooked, there was even a slight taste of charring. The interior, a beautiful forest green, was mush. I seldom throw food away but I tossed several pieces of this as just not worth eating. The pita bread was dry, too, but the rest of the plate was very good; I particularly liked the pickled vegetables and hummus and would go back to try other plates if I get those things; the bed of parsley and radish underneath the falafel patties was also a nice refreshing note.  (Edit to add:  I have since learned the falafel may have been revithkeftedes, the Greek version of falafel, which is made with cooked, mashed chickpeas instead of ground, dried chickpeas.  This would account for the mushy texture.  I plan to give them another try).

Though I had shied away from the gyro, I had noted there seemed to be some pink on the meat on the spit and I still wanted to give it a try but it was not until earlier this month that I was back in the neighborhood. Though again the spit was not turning I went for a gyro anyway. A large portion of meat was deftly sliced off and warmed up on a flattop. A modest portion of onions and tomatoes were added as well as a pita. 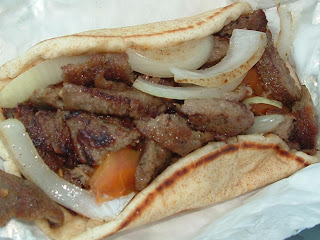 Okay, this one lives up to the hype. Though it’s not apparent in the picture there was a tinge of pink on some of the pieces of meat and this was by far the juiciest gyro meat I’d ever eaten. And probably the biggest gyro - I think the whole sandwich weighed in at 11 oz. Some reviews online have stated it’s only beef, not the typical beef and lamb mix, but I didn’t think so and the menu does say it’s both. The pita in this case was fresh and fluffy, almost like naan. I could have used more of the onions and tomatoes and sadly the quantity of tzatziki which I got (to go) was very inadequate. I must admit the sauce is half the reason I like gyros so I was disappointed but I’m sure if you ate in, you could ask for more, if necessary.

The menu is very varied with Tex-Mex, Mediterranean and American sections; given how infrequently I’m in the neighborhood, it’ll probably be a long time before I try any thing else and I’m probably going to want another gyro next time.

Now, under the heading of Unsolved Mysteries of the Montrose, I'm not sure what the name of this place is. The sign and the take-out menu both say AL Quick Stop. Capital A, capital L, no apostrophe, no s. (The take-out menu makes it even clearer- there are pictures of the menu on Yelp so I’m not going to post it here). But it’s known by everybody as Al’s, listed on every user review site that I know of as Al’s, and there are dishes on the menu such as ‘Al’s Diced Salad,’ and ‘Al’s Chicken Sub.’ Rogue sign maker and rogue printer perhaps? Or perhaps the chef at AL is named Al?
Posted by Bruce at 8:27 PM

Ike blew away the old Al's Quick stop sign and it was just a sign frame for a long time. A few months ago the new "Al" sign got put up (along with the sidewalk tables and a new floor inside). Old sign said "Al's" thus that's why everybody calls it that. Old sign: