I like this little place on Washington Avenue, in spite of the fact it's on Washington Avenue. It's in a small, wedge-shaped space back from the street, easy to miss, especially if you're headed east.. There's even a drive-thru. How suburban, and in the Heights, yet.

Despite a rather sleek interior and full bar, it seems to be in existence mostly because of the food, not a desire to be trendy or hip, and without a 'we're so cool, shut up and eat our food' attitude. They do, however, make at least a passing mention of being 'gourmet.' (Shudder).

The lure, besides the unconventionality of the setting, is in their specialty meats, showcased very simply in burgers, dogs and sandwiches. The website touts the meats, even putting the nutrition information in full view on the front page instead of squirreling it away someplace that requires multiple mouse clicks to find. In the restaurant, there are placards mounted on the divider between the dining area and kitchen with the nutrition data and notes on the provenance of their meats so you can be well-informed as well as well fed. Sammy's is on a mission. Bravo for them. 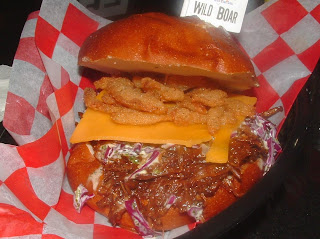 On my first visit, I tried one of the house specialties, a Barbecue Pulled Wild Boar sandwich with cilantro slaw, pickles, cheese, fried onion strings and barbecue sauce. I was a little concerned that the menu description mentions cheese. Barbecue and cheese don't go together to me, I'll leave that combination to BK and Whataburger. I was even more dismayed when I saw what appears to be regular American cheese on the sandwich. Other than doing a good job of insulating the crispy fried onion strips from all the juiciness below, the cheese added nothing to the sandwich for me and next time I'd ask for it to be omitted.

But other than that, I liked the sandwich with it's bold flavors and it was as juicy as all get-out. I thought the pickles and sauce were nothing special but it's really about the meat. The pretzel bun from Slow Dough Bread Co. was dense and chewy enough to stand up to the juiciness and there was never a chance of it becoming a soggy mess, falling apart in my hands (very important when being a gourmet), but it was messy enough that I had to wash up afterward.

One of the meats they offer is elk. I've had bison and venison many times but except for the bison dogs and bison chili at Bubba's Texas Burger Shack, I've never really had anything made with bison that I liked - it's too lean and dry. I've had some good things with venison, sausages from some Texas sausage makers and the venison chili at Armadillo Palace, that I like, but I've heard great things about elk. I've heard it makes awesome chili. I know you can buy elk here in Houston and online but have never gotten around to trying it so on my second visit I tried the Elk Dog (and kudos to Sammy's for calling their dogs sausage dogs rather than hot dogs). 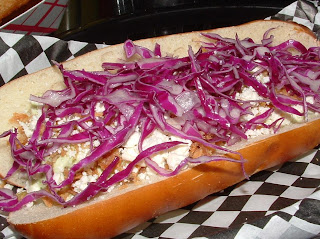 The Wild Boar sandwich had come will all the factory options installed but with the dog I was confronted with the dilemma of what toppings and sauces to add. I didn't have a clue what goes with elk. I asked the cashier for a suggestion and he mentioned sauerkraut. Really? Sounded awful to me for some reason. I settled on the purple cabbage, feta and cilantro aioli. Much to my relief, they went very well with the elk and didn't overpower it. I loved the meat and I must try everything else on the menu with elk. I wish they made an elk chili. (Actually, I wish they made several chilis; the only one of the menu is Rattlesnake Chili). 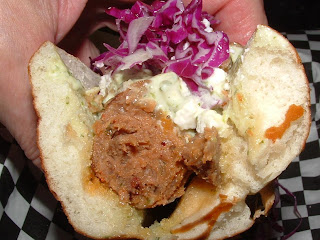 The very sturdy roll from Slow Dough was perhaps the only element that was a little off, too sturdy to be at all soft and squishy like the roll encompassing a dog usually is and chewier than it needed to be next to the tender meat. Maybe those excellent New England style split-top buns from Slow Dough that the Good Dog Food Truck uses would be a better choice, I don't know.

Whatever. I'll be back for more.

I went to Sammy's last week and I must saw I was not at all impressed, had the trio of sliders and they didn't have much meat at all on them, it was a 1/8" thick premade patty with not much flavor. Maybe I was expecting too much but I probably will not go there again.
Ed Broussard