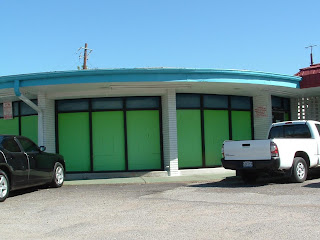 And the award for Stealth Restaurant of the Year goes to....Myung Dong. The street-side signs are faded beyond legibility, the sign on the rooftop in Korean is gone, the door is hidden back on the side and the piece of paper taped to the door gives only the days and hours of operation without identifying the business. And I must have been to La Roca right next door dozens of times without ever realizing there was any kind of business operating out of this space that served the general public, much less a Korean restaurant along this stretch of Bissonnet.

But I happened upon a picture of the building on Yelp and immediately recognized it. The reviews on Yelp are almost uniformly positive and so was a report by Tasty Bits a couple of years ago. Once I saw the picture of the seafood pancake, I had to go.

For my first visit I went in during the hellish days of our summer; advised by a Yelp reviewer that there was no a/c, I went right after they opened intending to get food to go but I found the room pleasantly cool, with two floor fans on stands keeping the air moving, though it was a little musty from having been closed up for two days. For some reason I couldn’t understand (very little English is spoken), they couldn’t do the Bee Bim Bap to go so I opted for the Seafood Pancake - Hae-Mul-Pa-Jun. I took a seat, fortuitously as it turned out, where I could see into the kitchen a little bit and once the lady started cooking and the aromas started wafting out, all traces of the unpleasant mustiness disappeared. And it was clear this was gonna be good. 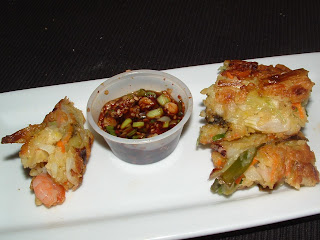 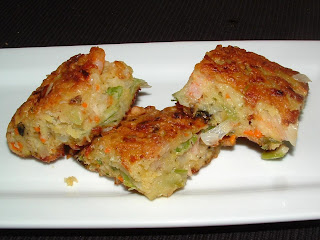 It took a long time for my food to be ready. During the wait a delivery of supplies took place. I saw cases of frozen oysters, chili powder and other supplies I couldn’t identify being brought in. Finally I was summoned to the cash register to pay (cash only), took my sizable tray of goodies and happily made a bee-line for home. It weighed a ton. Well, more like 4 pounds, maybe, but way too heavy for my kitchen scale. I’ve had Green Onion Pancakes at Chinese restaurants before and picked up Scallion Pancakes in the ready-to-eat section of Super H Mart, but I’d never seen anything like this. The aroma was incredible. I portioned out some for my first sample and dug in. Oysters, shrimp, mussels, scallops, they were all there and in great abundance; I think I got a bit of each in the very first bite. The crust had a nice crispness on top and bottom and was good and moist throughout. It’s been noted elsewhere they use surimi instead of real crab but with all the other types of seafood in such abundance, I hardly noticed. And it was readily apparent why it had taken so long to prepare. This is more like a sheet cake than a pancake. 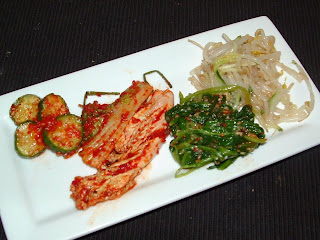 The quantity of dipping sauce and banchan that accompanied the pancake was rather skimpy. I found myself regretting that I had not tried to write down what was in the sauce so I could attempt to duplicate it later but I have since learned that a shortage of banchan is not a problem you’re ever going to encounter here if you eat in. I ate on the pancake for 3 days, then wound up freezing about a third of it. This surely would be enough for a family of four for at least one meal. (Pictures of the whole package will be posted below. The pancake reheats successfully from being refrigerated, not so well out of the freezer in my experience).

I was much less impressed with the Kal-Guk-Su that I tried on my next visit, hand-made noodles in anchovy broth with vegetables. The noodles had been snipped into short lengths, precluding the joy of slurping, and some were clumped together and undercooked, the anchovy disappointingly very understated. While this was no where near as impressive a dish to me as the pancake one of the reviews on Yelp explains the origin of the restaurant name and the significance of the dish and proclaims it the ‘Star of the Menu.’ So there you go - to each his own. 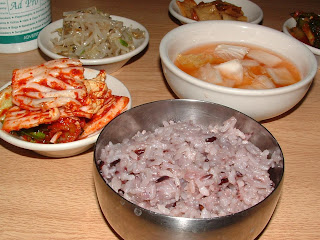 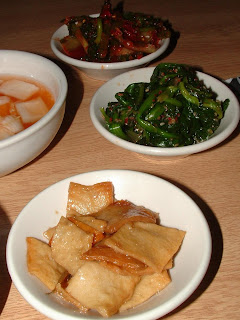 One of the things about Korean restaurants is even if your main is disappointing you’re not likely to leave hungry. On this visit I was introduced to the wide array of very generous portions of banchan including about 2 cups of rice that reviewers have referred to as purple but I believe is unhulled, sticky rice which takes on a purplish tint when cooked plus a very good kimchi, nabak kimchi in a cool broth, kongnamul (sprouts), fish cakes, sesame spinach and one I haven’t identified with bitter greens, both leaves and stems. 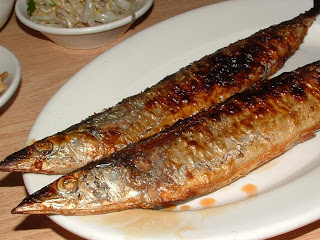 I have become fond of the ever-watchful mackerel which is one of the banchan at Jang Guem so when I saw a couple of mackerel preparations on the menu at Myung Dong, I went for one, Ghong-Chi, grilled, salted pike mackerels. Mackerel flesh is very oily and these were very moist on the inside and tended to flake into small pieces, difficult to handle with the chopsticks, but very good. 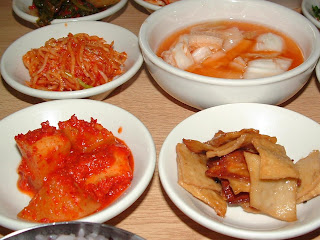 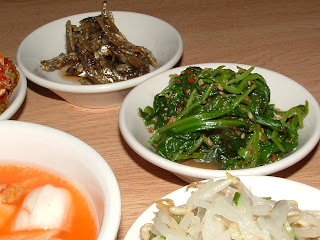 Once again there was a full array of banchan and I way over-ate. There were also some new offerings. The spaghetti-like item was crunchy, shredded daikon I think. In front of it chunks of daikon, also, possibly. The little silvery fishes, stir fried sardines they’re referred to in the ready-to-eat coolers at Super H Mart, I initially thought I was not going to like but wound up polishing off all of that bowl and ignoring the fish cakes. The chewiness was another nice contrasting texture to add to the mix.

There are many other things on the short menu to try. Korean food is addictive but it’s way too easy to over-eat when presented with such a feast and since it’s mostly vegetables I can tell myself ‘it’s low calorie, a few more bites won’t hurt.’

By way of disclaimer I perhaps should acknowledge that I haven’t commented on any of the meat dishes which are probably the main thing that people go to Korean restaurants for, but I eat very little meat these days and the portions, judging from the reviews and pictures on Yelp, are very large and I just haven’t felt like trying them. Nor have I had the Bee Bim Bap here; their version is not served in a hot stone bowl so you do not get the crispy rice to savor.

This is a two person operation, at least it has been every time I’ve been in. Service is practically non-existent as the lady spends almost all of her time in the kitchen and the man is frequently by her side or across the prep table from her helping. Diners help themselves to the tea from a big pot on the counter, and the condiments, such as they are. It’s not that the people are rude, they’re just busy and that’s fine with me. The lady can cook, and it’s perfectly alright that she spends her time doing that rather than fussing over me at the table.

They are open Tuesday thru Saturday, 11am to 9 pm. Since the menu photos on Yelp are pretty useless, here are some better shots of the short menu plus some pictures of the seafood pancake and banchan that I got to go on my first visit.
Posted by Bruce at 4:13 PM