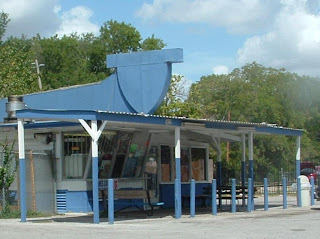 I had to drop a friend off at Hobby recently and took the route down Telephone so we could get a Tex-Czech fix at the Original Kolache Shop. Heading on down the road I spotted Pupuseria Emanuel and remembered I’d read an Alison Cook review a couple of years back and had it on my list to try if I was ever over that way. So I dumped my so-called friend at the terminal, told him I’d call him if I wanted to pick him up when he got back to town, and headed back to tend to the important business of the day.

It's several notches below funky as far as ambiance goes - a couple of metal benches and a metal picnic table out front, more of the same in a screened-in but un-air conditioned dining room. The pupuseras work out of sight so you can't see or hear them patting out the pupusas but you can see them sizzling on the griddle. As I walked up to the window the entire griddle was covered with them - they were working on a large to-go order and it was ten minutes before they took mine. 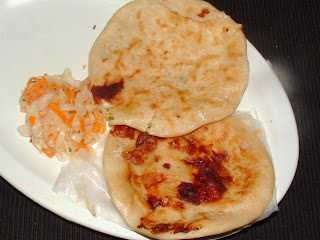 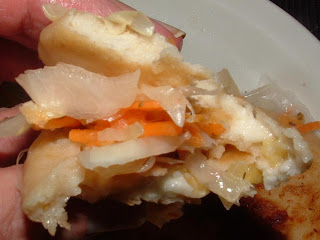 The pupusas here are larger than most and excellent, not as greasy as some and with lots of filling and with some varieties not commonly seen. I got a couple of those - calabacito con queso and camaron con queso. The curtido is mildly brined, not overwhelmed by the vinegar as some are, and the salsa is shockingly spicy. At most Salvadoran places, the salsa is not much more than tomato sauce since Salvadoran's supposedly don't like spicy food, but this had a lot of heat. The pupusa de camaron y queso was the best. It was just tiny, frozen shrimp but they imparted a lot of flavor making this probably the most flavorful pupusa I've ever had. Too hot to pick up right off the griddle, of course; amazingly I got all the way home and they were still good and warm.

There are a couple of other unusual items on the menu - besides tamales de pollo and elote there is a tamale piques, which means a bean filling. I was going to order one of those, too, but they said they couldn't do that the day I was there. There are also some desserts including Nuegados con Miel - fried dough with honey, which sounds like a sort of a Salvadoran beignet.

Prices are a maybe little higher than most pupuserias but the pupusas are large. This is Central American comfort food at it's best.

There are English translations on the menu posted in the window for those who don't know much Spanish or Salvadoran food but the staff I encountered was not very fluent in English. There's a second location now on Edgebrook that is also a panaderia.

I couldn’t find Cook’s old review but did find my notes - she recommended the pastelitos. So I guess I’ll go back some time to try those and since I’m going to be in the neighborhood, I’ll go ahead and pick up that guy.
Posted by Bruce at 2:11 PM