CLOSED AS OF SEPTEMBER 2013

Wot?, as my distant (thank goodness) cousin Jim Bob would say. A chili parlor in Texas? Don’t they know every Texan over the age of two has their own SECRET RECIPE for chili that is MUCH BETTER than any other and they won’t order chili at restaurants? And don’t they know Texans don’t like to eat hot and spicy foods except in cool weather? Well, those are some of the excuses I’ve seen on discussion boards or heard from restauranteurs (maybe with a little exaggeration on my part) concerning why there are so few places that offer more than a perfunctory bowl of chili, our official state dish.

As a matter of fact, the proprietors of The Chili Shak are from Los Angeles so maybe they haven’t heard all those excuses, and I’m glad they haven’t. But this is not some West Coast la-la-land chili, it’s all beef and no beans. It’s a family recipe, too, not out of a can. There is only one variety and one spice level but chili is in or on everything on the menu including Chili Rice, a family favorite that seems to have inspired the business, Chili Nu Nus (chili on spaghetti but not Cincinnati style chili), chili fries, chili dogs, chili burgers, chili nachos, chili fritos, chili on baked potatoes and chili on tamales and burritos plus a chili sausage dog. One thing that is missing curiously - and it was my first clue the owners are not from Texas - is a chili pie; maybe that’s what chili fritos refers to. If so they might want to consider changing the name so Texans aren’t completely lost when looking at the menu. 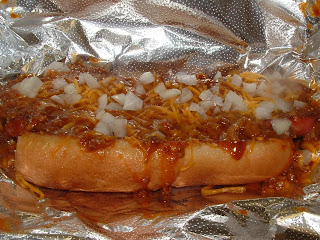 The chili is a little lacking in heat and cumin for my tastes but I know there will be some people, including some Native Texans, who will find it too spicy. As someone who has perfected my own SECRET RECIPE for chili that is MUCH BETTER than anybody elses, I could gritch about this or that but the fact is I'm tickled to have an honest-to-goodness chili parlor in the neighborhood. I really liked the Chili Dog - a bun-length all-beef skinless weiner, split and grilled, on a grilled bun, with a smear of mustard and a generous ladle of chili plus onions and cheese. Jalapenos are available as an extra. It was very messy but it was possible to pick it up and eat it out of hand, one of the requirements of a hot dog as far as I’m concerned.

The proprietor says he thinks their best offering is the Chili Burger, but I haven’t tried that.

The website gives the history of the enterprise but isn't about the restaurant. They're closed on Sundays.
Posted by Bruce at 11:15 PM

The Chili Shak is awesome- what Chili Bob's didn't tell you is that the place is very clean, the service is second to none and atmosphere is so relaxing so even though it's hot outside it's perfect for chili inside!
The spaghetti is so good and it comes with a salad and great cornbread!
If you haven't tried The Chili Shak, you need to go now and start trying it out so you can pick your favorites-- come winter, you'll probably have to wait in line. . . . Yes, it's that good!!
Praise God for this couple and blessing them with....The Chili Shak- it's great!

The Chili Shak is on it's way to being a franchised company. My son & I eat there quite often. He is your worst critic, but has nothing but good things to say about the Chili Shak. The Cortez's are right...the atmosphere is peaceful & inviting, the owners are wonderful & the food is fantastic!! The servings are generous & not overpriced. I recommend "the Shak" to all!

OMGEEE! I just can NOT get ENOUGH of the Chili Shak. The entire menu is mouth-watering and delectable. The restaurant is very clean and the atmosphere is welcoming. The staff members are prompt and hospitable. I would highly recommend The Chili Shak to EVERYONE!!! Blessings <3

Veronica and Bernard have a wonderfully hospitable place. The Chili and cornbread are to die for! I will be back soon to try all the other delicious offerings from this gem in Maplewood. Oh yeah. Save room for dessert. The Italian Cream Cake that Veronica just made was heavenly!