My mother was half-Swedish, on her father's side. Both his parents came over from Sweden in the 1870s and 1880s and the two families settled near each other in the Upper Peninsula of Michigan. But he moved away from his family to go to law school before marrying and moved his young family completely out of Michigan by the time my mother was 5. She learned to cook as a teenager from her maternal grandmother, who was of English descent, through New England, and she was never exposed to any Swedish customs or culture or cuisine, nor was I.

But I spent several years doing family genealogy and had a fascination not just with birth dates, deaths and weddings but with how my ancestors lived, what kinds of times they lived in, what were their prized possessions (revealed sometimes by wills), who were their neighbors and who did they know and what did they eat. And I've wanted to sample the foods and customs of their home countries and possibly visit there.

Our roster of Scandinavian restaurants here pretty much begins and ends with a certain home furnishings store so far as I know and I've been to the IKEA cafe a couple of times over the years. There really isn't much on the menu that's specifically Swedish, though most recently I had the smoked salmon plate, a decent meal for $6. It was a little less that ideally fresh from sitting out on the cafeteria line for too long but it was a nice, light counterpoint to this blast furnace summer we're having.

When I learned of the Kräftskiva or traditional summer crayfish party, I signed up (you had to purchase tickets in advance). I arrived early, hoping to get some shots of the buffet, and for some reason they called it a buffet rather than a smorgasbord, but hordes of my possible kinsmen had arrived early also and the gates had been let down and they were already wreaking havoc on the mounds of food while I snaked my way toward the ticket table. 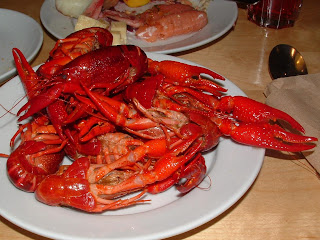 Billed as all you can eat adults actually were limited to two plates of the crayfish each. It was clear some people had done this drill before and bought more than one admission ticket so they could get more but two was enough for me - there was much more on the buffet I also wanted to try. There were lots of people in the room who I suspect had only minuscule amounts of Swedish blood coursing through their veins. Crayfish or crawfish, I guess no matter how you spell it or spice it it's hard to keep Texans away when you're serving it. Swedish crayfish are served chilled, seasoned just with lemon and dill, and they were succulent and tender and delicious. Who needs cayenne and garlic? I did wish there wasn't so much more I wanted to try. 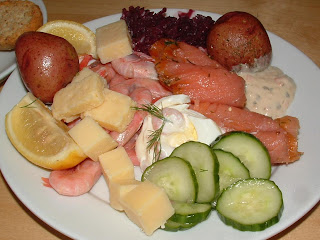 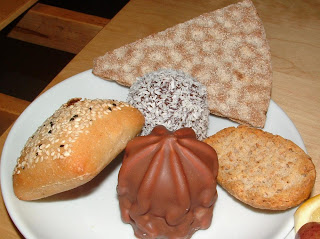 The rest of the buffet offered cold water prawns, seasoned again with lemon and dill, rolls of smoked salmon with dill sauce, boiled new potatoes with dill (no wonder I love boiled new potatoes with dill - it's in my genes), a selection of Swedish cheeses and a cucumber salad, plus hard-boiled egg with shrimp and mayonnaise. I passed over what is probably the most popular Swedish item on the regular cafe menu, Swedish meatballs with lingonberries, and there were also mashed potatoes and a tossed green salad that I remember.

Then there was a selection of Swedish breads, crispbread, crisproll and dinner roll; I've had them all before, plus the Swedish meatballs, purchased in the IKEA store. I love the crisprolls and the dinner rolls. Besides the two chocolate covered marshmallow heads pictured, made not with dense, heavy marshmallow, but almost whipped cream like texture - the dark chocolate one was the best, there were some Swedish cookies which I stuffed my pockets with before leaving.

I thought this was markedly better food than I've had in the cafe. The prawns were served cold and with shells, tails and heads intact; apparently Swedish diners are more fearless than most Americans. I observed most people laboriously picking the shells off but I just noshed away. I know there are people who claim the heads are the best part. I haven't had an 'Aha!' moment with regard to that yet but it certainly is a good way to work off some aggression and tension mandibularly, chewing on those shells. I think next time I may skip the shrimp and load up on more salmon and crayfish, though.

All in all it was a very enjoyable evening. I felt not only stuffed but also culturally enlightened just a little bit. I saw only one lady in a colorful traditional garb and I wanted to get a picture but by the time I had finished making a glutton of myself, I couldn't find her.

I've read they have done a traditional Swedish Easter smorgasbord in the past; I hope to make one of those in the future and I'm looking forward to the next crayfish party.

God it's great being Swedish.
Posted by Bruce at 2:18 AM