on Bissonnet, directly across from the entrance to Sharpstown Hi

Vallejo or Vallarta - what's the difference? When I first spotted this truck I was confused. One of my favorite taco trucks on the southwest side has been Taqueria Vallarta which used to be situated much further out on Bissonnet near Dairy Ashford. A unit of Taqueria Vallejo replaced that one and, now, there's a Vallejo very close to my house.

Tacos estilo Tlaquepaque are specialties of both, as are gringas. I had my first samples of both at Vallarta a couple of years ago and that's still the best gringa I've had. So besides similar names they have very similar menus.

Tlaquepaque is an arts and crafts district in Guadalajara. Tacos estilo Tlaquepaque means the tacos (barbacoa) are served topped with a salsa that includes the broth the meats were cooked in, like a savory, spicy gravy. When I had them at Vallarta I didn't understand this and when I got home discovered there were no onions and cilantro, nor had I been offered any. It turns out that's the way they're served; they'll put some on if you request, but it's not the typical presentation. Vallarta sold me just two of these but at Vallejo they're offered as a plate with five tacos for $5. That's 10 corn tortillas and probably about 10 oz. of barbacoa, topped with the sauce (they'll serve that on the side to add later if you prefer) and limes. I didn't get a picture of the Tlaquepaque plate but I did get a picture of the menu on the truck which shows it. 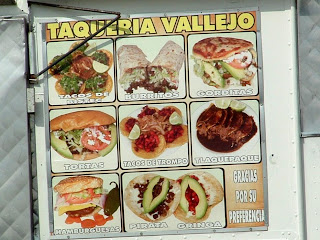 Judging by the picture of the tacos swimming in sauce you might need a fork or even a spoon to eat these. These sound and look like what's known in El Paso as 'drunken tacos,' although I think those involve a tomato sauce topping.

Five tacos seemed like a bit much to me so I went for a gringa and a fajita gordita.


A gringa is al pastor meat, avocado and queso in a folded flour tortilla, grilled. The meat was a little tough but vividly seasoned; the tortilla was store-bought and not very fresh so this was not as good as the best I've had but not bad. The gordita was good.

It's been difficult to find really good taco trucks around my neighborhood but there have been several new units show up recently and I'm eager to check them all out. I'm happy to find this one and I'll be trying it again. But sorry, senor, I gotta have my cebolla y cilantro fix or I get irritable.

Revisit: Ziggy Smogdust reported visiting this truck and trying the Tacos Tlaquepaque and said they were really good so I made another stop. 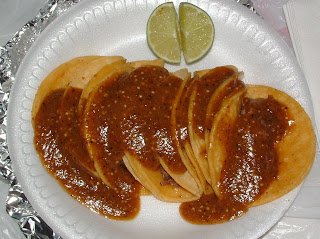 I got some to go with salsa on the side and added it at home. The tortillas are the smaller, 4" size, and there is no where near 10 ozs. of barbacoa, probably no more than 3 or 4 so it's not as huge a meal as I thought. The salsa was thick like a gravy and very good. This is really a very good choice on this truck and much better than what I had at Taqueria Vallarta a couple of years ago. The salsa there was very thin and runny and I didn't know they were supposed to be smothered in the salsa and used just a little of it. I used all the salsa I got here and even though mine were not swimming in it like the picture on the truck, they were quite messy to deal with. I loved this dish and I love the concept. I wonder if there are other, similar presentations?

And you don't really need the onions and cilantro.
Posted by Bruce at 9:57 PM