We lost several of our Malaysian restaurants last year, at least three I think, including the two I was familiar with, Nyonya Grill down in Sugar Land and Kuala Lumpur on Bellaire. There's been a lot of buzz about Banana Leaf in the interim but I'm just getting around to trying it out. Got a craving for roti canai, what can I tell you? 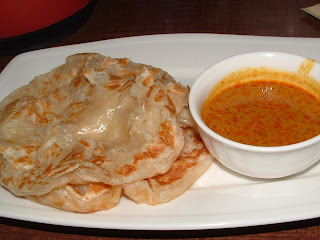 I was surprised at the size of the place when I walked in. To tell the truth, I don't pay much attention to those details in the reviews I read (actually, I just look at the pictures), but I expected a banquet hall sized-room, packed with a throng of people. Instead, it's the size of your typical Houston hole-in-the-wall eatery, though much more nicely appointed than many. There was a throng - the tables are rather close together.

The roti canai was heavier than what I'd had before at Nyonya or K.L. and had picked up more oil than those, as I remember. Still I had no trouble finishing it off. While that's a bit of bad news the good news is, because of that I may actually have the will power to forgo one of these on every visit, thereby saving 5 or 600 calories, probably, and have room to try some dessert. The ginger dipping sauce was great.

I tried to order the Malaysian Buddhist, a vegetarian stir-fry, but the pretty and helpful young waitress said it wasn't very good and tried to steer me to some other dishes. I realized she might be assuming I'm not very adventurous but I didn't want to leave on my first visit actually having had a bad dish so I went with her advice and settled on the Eggplant/Shrimp stir-fry. 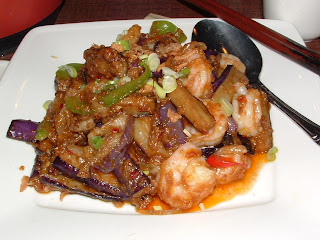 Whether I had been steered toward a dumbed down, Americanized dish or not became irrelevant when I tasted this; it was great. I'd had some very good dishes at K.L. and Nyonya but I believe this topped them all. I couldn't wait to go back.

This came with a separate pot of rice, about 4 cups worth and I also got the Hot Black Rose tea which has a very delicate, wonderful aroma. I dug into the rice the way the proprietor of Nyonya said is the way Malaysians do it, picking up clumps of it in the fingers. I noticed I was the only one in the restaurant doing this.

On another visit a few days later I wanted to order something off the lunch menu as I wasn't very hungry; I did forgo the roti canai but the dish I wanted - I think it was the Masak Lemak - the waitress (same one) said was not available. Hmmm. She tried to steer me toward a tofu dish or a pork chop dish but I wound up settling for a shrimp curry. It was a wonderfully savory curry, only mildly hot, not quite as awesome as the eggplant dish but still quite good.

While waiting, I saw several of their sizzling platters coming out and they looked incredible. I know what I want the next time (assuming it's available).

There are small flat screen video screens next to the tables along the walls on both sides which show a progression of pictures of their alluring dishes but both times the ones nearest me have been stuck on the crispy, fried calamari. Maybe they're trying to send me a message?

Those digital picture frames with the slideshows of their food are just criminal. It's by far the most effective marketing tool I've ever seen at a restaurant.

The only thing that beats it is having the dish delivered to the table next to you where you can see it, smell it, and hear it sizzling.

The eggplant with shrimp is really good. The shrimp paste it's cooked in gives it a certain taste and texture; those who are more accustomed to pedestrian Asian restaurants may find it too "authentic" for their taste, but with an open mind, one will take to it and want more to take home.

I am Edward from an Japanese NGO and an editor for the newsletter aimed at enhancing the language and teaching skills of Japanese language teachers in Malaysia. In the coming issue, I am designing a centrefold whereby I create a Malaysian-Japanese menu (in Japanese of course) so as to enable teachers to use as a teaching tool in class. I wonder if I could use your roti canai photo in the menu. Your kind consideration and generosity would be very much appreciated. Looking forward to your early reply.

Yes, you may help yourself to it.