THE SUGAR LAND LOCATION OF UDIPI HAS MOVED, ALTHOUGH ONLY A FEW DOORS DOWN, AND IS NOW SEPARATELY OWNED I UNDERSTAND.

I had heard about Udipi for years but never remembered it when I was in the mood for Indian food or up in the Hillcroft area. Recently I stumbled upon the one in Sugar Land and decided to try it and since then I’ve been back, four times in all, to that location and the one on Hillcroft. Both restaurants are nice inside; the Hillcroft one is much nicer than one might expect from the exterior.

I’ve had the weekday lunch buffet for $7.99, a very good bargain and much better than the one down the street on Hillcroft. The only thing I wasn’t impressed with much was the iddly, the steamed, flying saucer-shaped bun made from fermented rice and black lentil, but the iddly fry, wedges of iddly fried like french fries, is much better. Several items are made from the fermented rice, black lentil mix, including the uthappam and lentil donut and the dosas.

I love the lentil donuts and the various pakora, especially the ones with chili pepper strips (bajii pakora), although I wish they were fried a little crispier. On my first visit I really enjoyed the vegetable biryani, baigan bartha and mushroom masala (a very meaty tasting dish) as well as the iddly fry and lentil donut. I appreciated that almost everything has been clearly labeled both in Indian and with English translations on the buffet. 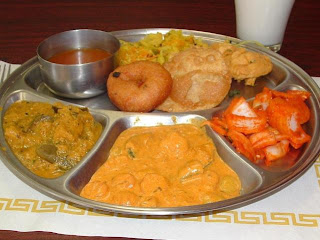 On another visit I had more of the baigan bartha (eggplant, at 8 o'clock in the picture), a vegetable korma (at 6 o'clock), onions in chili paste (the hottest thing I’ve had), several of the pakora including more of the chili pepper strips, potato pakora, lentil donut (mehdu vada), poori, and a cup of the Rasam (soup). I could become addicted to the lentil donuts. I have not been able to recall what the item is at the top of the plate in the picture; perhaps a dal?

They bring out a freshly prepared dosa of your choice from an extensive selection as a complement to the buffet. If you’re not familiar with their dosas you might want to study the menu online before going to get an idea of your choices. The dosas are quite large.


I went once on a weekend and ordered off the regular menu, hoping to get a little more crisply fried pakora. The mixed vegetable pakora appetizer was way too much for an appetizer and could have been a meal in itself. I also had the Uthappam deluxe, a huge Indian pancake served with a cup of soup and chutneys. The green chutney is the coconut chutney; I can't remember what the other one was. Between the pancake and the pakora I had way too much food - the pancake alone would have been enough, also. At the top of the picture is less than half of the mixed pakora appetizer plate.

For dessert I've tried the Sheera and it was very good, although I could manage only a small portion. I found the salt lassi and a yogurt dessert too bland for my taste as I like a very sour yogurt.

The staff at both locations I've visited has been very courteous and helpful.


After more than a year I recently revisited Udipi on Hillcroft. As always, almost everything on the on the buffet is clearly labeled. Starting at 1 o'clock, underneath the naan I got a Vegetable Biryani which was the most disappointing dish on the thali, rather dry and bland compared to other vegetable biryanis I've had, then Raita and Pickle, my beloved Mehdu Vada and Idli. At nine o'clock is Poriyal, a sauteed cabbage and urad dal dish that I really liked while in the center of the tray the curry was simply labeled South Indian Vegetable Korma, very good although very mild, and at the top Kadai Paneer which was also very good. I should remember to just skip naan off of buffets like this, especially since they bring out the fresh dosa here. I was served a Masala Dosa (wasn't asked which one I wanted like before) and it was much better than I remembered.

There will be hits and misses on any buffet on any given day but Udipi is still as good as I remembered.