Poster JimH of Sugar Land noted on eG recently that this place has opened in the Foodarama Center at Wilcrest and West Bellfort. He got some very good pork tamales and corn tortillas and was planning on going back to try some of the other offerings.

I went over and noticed the signs in the window for Enchiladas Potosinas and Rojos but all they had ready to serve at 11:15 am were the breakfast steam table items and some dry tamales, possibly left over from the day before. JimH tried again and said the plates are pre-made and in the cooler and weren’t very good and he would stick to the tortillas and tamales. I haven’t been back.

According to the business card there are other locations around town.


The sign had been up for something like a year before this place opened in March. I went in on a Saturday and got some very good pork tamales and champurrado plus a pound of the corn tortillas. The tamales, $1 a piece, were almost as large as those from Tamales Dona Tere and very good, though just a little dry. The champurrado was very good and I initially really liked the tortillas. Though not as wonderful as the handmade tortillas from El Bolillo on Airline, they’re definitely better than store bought but lose that edge (freshness) after a couple of days.

Besides these offerings (tamales and champurrado only on weekends I think) the signs say Pollo Rostizado todos los dias and barbacoa, birria de chivo, menudo and guisado de lengua de res on weekends. I saw some of the chickens, a bright orange color, spinning away in a big rotisserie and determined I had to come back and try that. I’ve been back a half dozen times and they’ve never had the Pollo Rostizado ready to serve but I asked someone with very good English and he told me they only start them around 2 in the afternoon on weekdays and they’re not ready until about 4:30 (I usually went in around 1pm).

I went back on a Sunday to try again; at 2pm the chickens looked pretty done to me but were indistinguishable from supermarket rotisserie chickens from across the room. I requested one and they tested several with a temperature probe before telling me they weren’t quite done. I opted for the birria de chivo instead. 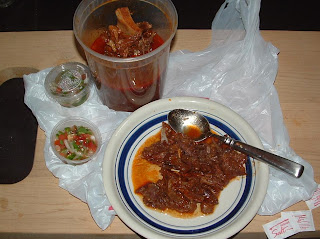 Birria means mess or stew I understand and in Mexico various meats are used but around here it usually indicates goat; this place makes that crystal clear.

I got a pound ($8.99) plus some pico de gallo that was loaded with diced serranos and quite hot. This was okay but not very complex. I’ve eaten a lot of goat in the last couple of years since learning it’s lower in cholesterol and calories than beef; I like it better than bison. Goat is very common at Mexican restaurants, every Pakistani restaurant I’ve been to has goat dishes and every Halal butcher shop I’ve been to sells it. Only one other time, at Casa San Leon on Longpoint, have I had goat with a little of that ‘wet dog’ smell that turns a lot of people off. I plunged gamely ahead on this dish with no regrets but I’ve had better birria at Trudi’s on Beechnut at Bissonett, a little kiosk that is only open on Friday, Saturday and Sunday and packs ‘em in starting before daylight. Birria is basically the only thing they serve and it’s very good, best I’ve had.

This sample from Milpa Real had a lot of bone in it but I made some good tacos out of it.

I still have to try the chicken some day - I’m sure the bright orange chickens I saw on my first visit were at a very early stage in the roasting process and the orange (achiote, cayenne?) darkens as they cook.

This place has been open for a couple of years now. I went in once shortly after they opened and bought a pound of tortillas and a pound of birria (there’s a birrireria/taqueria attached). That birria was pretty much like the stuff from Milpa Real as best I can remember. I’ve meant to go back to the birriria and check out the rest of the menu but haven’t.

According to the business card there’s a second location at 7610-D Office City Drive on the southeast side. 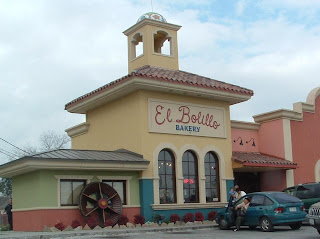 I’ll just throw this one in here in case any of my readers don’t know about El Bolillo, a fabulous bakery on Airline wth lots of pluses. Perhaps the best bolillos and teleras in Houston, great warm churros in the morning and Tres Leches Cake, plus a huge variety of baked goods from pan dulce to pan huevo and many more. One of the specialties you must not miss is the home-made corn tortillas ($2.50 a pound). There is a lady who nixtamalizes and grinds her own corn and prepares her own fresh masa instead of using the reconstituted maseca. The resulting corn tortillas are wonderfully aromatic and tasty and will ruin store-bought tortillas for you forever.

UPDATE:  THESE HOME-MADE TORTILLAS ARE NO LONGER AVAILABLE.

Here’s an article on Grist about the industrialization of tortilla making in Mexico in recent years that makes it plain just how lucky we are to have this resource in Houston. 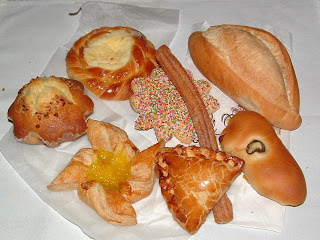 I always watch for the racks fresh out of the kitchens for the freshest baked goods, many still warm from the ovens. In the picture, the yellow cake cupcake at 9 o’clock with just a thin glaze and nuts was still warm from the oven and wonderful. The dough for their sausage/cheese/jalapeno kolaches is a bit heavy for my taste. I’ve never been able to get a good picture of the Tres Leches; the pieces are too tall and they lay them down in a container. It’s been impossible to get it out for a picture without messing it up.
Posted by Bruce at 6:49 AM

I thought I'd mention this to you in the spirit of birria. I randomly stopped by a Korean restaurant on Gessner and Longpoint (1411 Gessner), about a block from El Jarro cafe and in the same parking lot as a meat market, probably La Michoacana, and ordered their "birria." It was the last lunch special for about 8 bucks, I believe the dinner portion was 12 (for some reason, well cheaper than everything else).

It was beautiful tender goat meat brought to the table simmering in a broth that tasted of sesame. Next to it they brought out a small plate with chili paste, minced garlic, and scallions that you mix up and add to the meat. There was also a bowl of rice and 8 little portions of various kimchi and salads. Tons of food, an absolute steal.

In the way of Mexican Bakeries, there is one across the street from the Fiesta on Quitman (E of Main) that might be good. The food is tasty, but I don't go nuts for Mexican pastries, so I've never tried them.

Thanks again Rubiao. Sounds very good. I haven't found pollo asado on the southwest side as good as El Norteno on Longpoint so I still have to go up that way from time to time.

I've never been that fond of pan dulce or pan huevo but the bolillos and teleras at El Bolillo are the best I've found.

I've had the birria at Tortilleria La Reyna and it's a bit tough and lacking in collagen rich flavor meat acquires when properly braised. There is just no reason to subject yourself to subpar birria when Trudy's is so close. If you get it with consomme and ask for all parts, rather than what they call "barbacoa", you get a whole mess of delicious body parts.

Have you tried La Pupusa Alegre on Bellaire? This is my current favorite for Salvadoran at the moment. Pupusas are always hand made to order (you can hear slapping sounds on the back) and are nearly greaseless.

Keep up the good work. You are right in my neighborhood, so I look forward to more posts.

Thanks Misha - I've had it both ways at Trudi's but didn't realize you could ask for it that way, just thought that was the 'luck of the ladle.' I haven't been back there in over a year.

I haven't done any Salvadoran in months but I remembered your recommendation (and my last visit to La Roca was a bit disappointing) so I've got it on the list of places to try. Thanks.

La Roca has been disappointing for me as well. I usually get the tamales de elote to go. I love pupusas, but it takes a really long time to get one there. Has anyone tried La Pupusa Rica on Gessner? It is usually pretty busy. It is right by the former 3P's BBQ, which is now supposed to be a Tropical Grill and Cocktail Lounge. I will be surprised if they have a liquor license!

I've been noticing La Pupusa Rica for a long time but have never stopped in; one visit to La Roca is probably the only Salvadoran I've done in the past 8 months or so. Parking will certainly be less of a hassle at La Rica.

I want to try the Pupusa Allegre on Bellaire that Misha has mentioned a couple of times.

I didn't realize 3Ps had been reincarnated already.