There are more than 2 dozen Salvadoran restaurants listed on b4-u-eat and I’ve been to a third of them and this is my favorite. You can choose table service or some items are readily served from a steam table next to the cashier for quick in-and-out. I’ve done both.


The menu is pretty extensive. I’ve had the riquas which has been basically a thin, elongated corn fritter most times I’ve had it but on the most recent visit was drier, more like a corn pancake. I think this is produced by wrapping the dough or batter in a banana leaf and grilling it rather than steaming it. It’s served with a generous slab of a firm, slightly salty feta-like cheese, like the Mexican cotija but probably Queso Duro, or a dollop of crema Salvadorena. The first time I inquired about it the waitress brought over a plate to examine that had both the cheese and the crema and when she tried to take it away I insisted she leave it so I got both. You can get both for $1 extra but be advised it's a pretty good sized chunk of queso. It’s on the appetizer menu but I saved it for desert as it was quite sweet and so good.

Pupusas come with a variety of fillings, arroz (estilo olocuilta), queso, chicharron, loroco, frijoles, fajita, and, of course, revueltas (mixed) and are the best I’ve had. They’re served so hot you can’t pick them up like you’re supposed to. When they split and the oils from the cheese and meats spill out, it is like they were sauteed in butter.

The curtido is made of more coarsely shredded cabbage than others I’ve had and has sliced carrots instead of shredded and is very vinegary and a bright yellow color. You get an individual fresh serving of it rather than dipping out of a communal crock like at some pupuserias, which I appreciate, and it is the best I’ve had. Every time I’ve had it the vegetables have still been good and crisp. 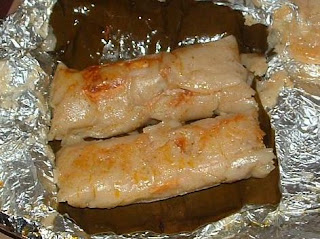 Tamales are a specialty and are available in either pollo or puerco, both with potato. Some Salvadoran tamales have a gelatinous texture but La Roca’s are positively creamy and delicious - and very, very moist. They are among the best tamales I’ve ever had anywhere and quite addictive. These are served on the plantain leaf they’re steamed in with curtido and are also available piping hot on the steam table, individually wrapped in plantain leaf and foil and usually double-bagged by the cashier because they’re so moist. I stop by to pick one or two up sometimes for a snack and head for a table in the park across the street. You’ll need napkins for your hands just getting them open and a utensil to eat with - they can’t be picked up.

Another option is the tamal de elote. This is pure masa, served with a dollop of Crema Salvadorena. This didn’t seem all that interesting to me until on one visit I saw a tableful of young Salvadoran men having nothing else, 2 or 3 each, and wolfing them down with gusto, and I had to try them. These are served in the corn husk they’re steamed in; they’re very good but I find them a little less interesting and would like them better if steamed in the banana/plantain leaf, but I suppose that would be culinarily incorrect.

The aroma of fresh baked pastries coming from the Panaderia in back is a real plus and I seldom leave without picking up some baked goods. You can serve yourself from a large display of Salvadoran pastries and breads, unfortunately not labeled. You take a tray and a pair of tongs and take your selections to the cashier.

There’s also a small grocery section with a selection of Salvadoran products including coffees. They do not serve tea at La Roca, only coffee (one of El Salvador’s main exports) but I was surprised there are no coffee beans and mostly instant coffees for sale. In the cooler section you can find gallon jars and pillow packs of Crema Salvadorena or Hondurena, several Salvadoran and Honduran cheeses, tropical sodas and other products.

My waitresses have all been friendly and helpful though none of them were really fluent in English. The cashier usually speaks English.

The biggest drawback I’ve encountered is the limited parking. The place can be very busy and double-parking is common in the tiny lot. Signs indicate you might get towed if you park in the strip center next door, even though there are several vacancies among the shops, so be forewarned (La Roca used to be located a few doors west).

La Roca apparently supplies other eateries in town with both baked goods and tamales. I’ve seen their labeled baked goods at several places, taquerias and even other panaderias, and their tamales at carnicerias including Nortenito, on Bissonnet at Wilcrest and Carniceria La Michoacana # 27 further out Bissonnet and I presume you may find them at other locations of this extensive chain. These have been Mexican tamales, much spicier than those served at La Roca itself.

Ever since discovering the tamales here about a year and a half ago, they’ve been my favorite tamales in town, despite the blandness of Salvadoran foods. The creamy texture is like eating corn flavored whipped cream. However, having tasted the Colombian tamale at Las Delicias that has supplanted La Roca’s tamales as my favorite.

A blurb on the menu at El Pupusodromo down the street explains the importance of corn in Salvadoran cuisine: Pre-Colombian cultures believed that corn was a gift from their gods. Therefore, it was accepted as a holy meal. The preparation of the ground, the planting of the seed and harvesting the grain were considered a religious act.

La Roca does well by those ancient beliefs with it’s offerings. 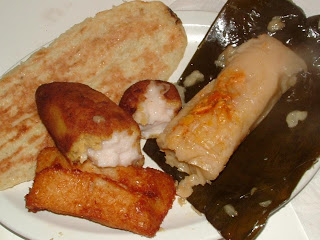 See comments on other tamales.
Posted by Bruce at 10:24 AM