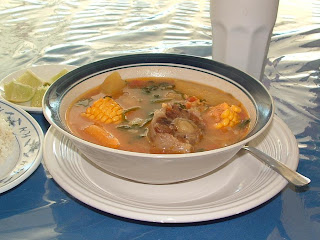 Ever since reading about the nacatamale, a tamale with meat and vegetables and olives described as throw pillow-sized, I have wanted to try Nicaraguan cuisine, La Comida Nica; so far as I know this is our first and only Nicaraguan restaurant. It occupies the space once occupied by the small Brazilian home-style buffet, Cariocas.

The owner is very friendly and speaks very good English. So does one of his sons who helps out with just about everything on the weekend, anyway. The menu is quite small, only a page and a half, and there are no translations. They have been open a month and unfortunately they do not do the nacatamale.

On my first visit the owner steered me toward the Vaho, pronounced baho, a weekend special consisting of beef, plantain and yuca steamed in a banana leaf and served with rice. It was good; it is basically a stew sans broth. Fritanga comes from the word for to fry but there is at least one other steamed dish on the menu, the appetizer Vigoron, which includes yuca and chicharron, steamed in a banana leaf I think (I haven't had this).

I also had an Enchilada Nicaraguense, a corn tortilla topped with shredded beef and rice, folded over and fried to make essentially an empanada. Both dishes were topped with the typical Nicaraguan salad of cabbage and carrot with tomato and purple onion; it isn’t on the menu separately but I think they call this Ensalada de Repollo.

For a beverage I had Cacao, the Nicaraguan version of chocolate milk which includes grated, roasted cacao beans and was very good.

The owner offered to do a half order of the Vaho when I inquired about portion sizes; it proved to be enough food to leave me very full.

Other appetizers include Vigoron, Chancho Adobado, and Tacos Nicas, which are like Mexican flautas, with chicken or beef. Platillos Tipicos include Salpicon, Carne Desmenusada (deshebrada), Pechuga or Bistec Encebollado, Carne Tapade, Arroz a la Valenciana (the Nicaraguan version of paella) and Carne Asada, which the owner said was basically fajitas.

Sides include Tajadas verdes (plantain), Queso frito, Maduro Frito, Gallo Pinto, and Guacamole. All plates come with the salad and some have frijoles fritos or tajadas verdes or frito or rice.

On my second visit I tried the Chilla (cheeya I think) which is like a tamarind agua fresca and was the best I’ve ever had, rich with bits of fruit. Other refrescos include Chicha and Cebada which I got a free sample of; I understand it includes guava and barley; it was good but not as good as the Cacao or Chilla. They also have typical American sodas.

For a main on my second visit I had the Sopa de Cola, a weekend special, a rich, satisfying oxtail stew pictured above with corn, plantain and yuca, tomatoes and carrot, parsley and cilantro, plus cabbage, rice and fideo, with a side of more rice. It was awesome on a chilly Sunday and I enjoyed it very much. A Nicaraguan family arriving for a meal oohed and aahed over my bowl.

Other weekend specials include Indio Viejo and Sopa de Albondiga on Sunday. Postres include Arros con leche, Atolillo and Bunuelos.

The menu is undergoing changes. I got an old menu to take home and a couple of dishes had been changed. Even more had been crossed off the new menu on my second visit. The most expensive thing on the menu is $9.

The restaurant is closed on Tuesday, open other days 11a to 7p. I’m sure Cariocas succumbed to too little business; they were not helped by their very limited hours and the food went downhill after a couple of months. I hope these people make it; I had the place to myself for a while on my first visit but the second time the place was bustling.

I will definitely be going back to try the Arroz a la Valenciana. 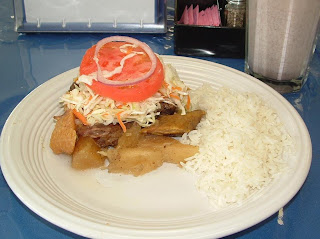 Vaho or Baho. In the glass is Cacao, a very satisfying version of chocolate milk. This is a half-order of the Vaho.
Posted by Bruce at 9:28 PM

Confession of a Computer Tech said...

This is a great restaurant and great review. Went there a couple of weeks ago and great food, 100% authentic, met the owners and they take pride in the cooking. The owner is main cook and she is in the kitchen everyday preparing the food. They are having a 1 year celebration this coming Saturday, November 14, 2009 at 2PM in their restaurant to celebrate 1 full year in services. They are having a DJ, food, prizes, games and much more to kick up their new website, www.nicaraguafritanga.com which is going to be live by Saturday. Please come and join for the party.

I missed the celebration but nice website. I'll be out there soon.

Fritanga Nica is moving..they are closing their doors from location on 6/20/2010 and having a going away party in celebration of the great times in this location. All are welcome for great food, drinks, desserts and music. Find us at facebook by our email nicaraguafritanga@gmail.com and or visit our website, www.nicaraguafritanga.com. See you there

Where is the new location??? Its not on their website. Please somebody give me an address

I'm afraid they never re-opened. I never heard from them again and I expected too. Its sad; the people were so nice and the food was so good.

There was another Nicaraguan restaurant, originally called Managua it too moved and changed names to just Nicaragua or Nicaragua Restaurant. It was at the corner of Westpark and Gessner but I'm not sure it's still open. I never got around to trying that one.