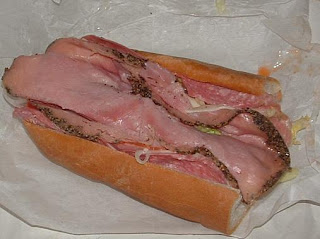 I've had to make some trips to the Clear Lake area lately and had heard of this fabulous sub shop and finally had a chance to check it out. It's hidden behind a Valero but easy to find despite the poor signage since it's right at the intersection.

The owners are from Delaware judging by the posters and license plates on the wall. I've read before in a national forum that the Delmarva Peninsula is a mecca for sub lovers and this is my first chance to find out for myself.

The place is small and very plain; the menu is quite small. On my first visit I got a Special to go. The sandwich was huge with 2 meats, cheese, lettuce, tomato, onion and a very good hot pepper relish. I had noticed a big gallon jar of the relish sitting next to the cash register and now I knew why - they undoubtedly get lots of requests for it and they sell it ($21 a gallon). The bread is chewy rather than crusty and quite sturdy, which it needs to be to hold up to the sandwich's fixings since a lot of their business is take-away. It was a very good deal for just under $5.

On a second visit I tried their Cheesesteak which is a little more expensive, but only by a few cents. I thought it was a little odd it wasn't labeled a Philly Cheesesteak but once sampling it I can see it's a little different than what I think of as a classic Philly. There was a lot of thinly sliced beef, probably sirloin, plus provolone and grilled onions and more of the relish, plus mayo and ketchup. I had read about that ketchup online and so knew to ask that it be left off and only a smear of mayo be added. I think I did the right thing. The relish adds a nice twist to the sandwich which I think would only be muted by the ketchup (I'm not a big fan of ketchup for anything, anyway).

I definitely preferred the Special of the two sandwiches but when I ordered one of those again the owner steered me toward the Italian (pictured above) which he said is his best sandwich. It too was just a few cents more than the Special and has 4 meats instead of 2 (ham, peppered ham, salami, Lebanon bologna?) and was one of the best subs I've ever had. Right away, the Italian becomes one of my favorite sandwiches alongside the Chicago Italian Beef (seems to be a trend developing here) and much better than any Philly I've ever had. Too bad this place is an 80 mile round trip from where I live.

They have a selection of Zapp's and Lay's chips and some sodas and Tastykakes, the packaged snack cakes from Philadelphia that are very good, although the ones I've tried had been on the shelf a little too long.

Besides the gallon jugs, they sell the Bay Valley Foods Chopped Hot Pepper Relish in quart jars for $9. I'm going to have to pick some up. It'll go nicely on the condiments shelf alongside the harissa and sriracha, etc.

There's supposed to be a menu online but I haven't been able to get the website to come up. They do have a meatball sub that I haven't tried but I can't remember all the other sandwiches on the menu.
Posted by Bruce at 7:33 PM