The Houston International Festival this year focused on Africa and listed some of our city’s African restaurants. I learned that most of them as well as most of the African food stores in Houston are in my corner of town (southwest) and decided to try them out. I had never heard of Suya Hut but picked that one first.

This is like your typical Houston hole-in-the-wall ethnic eatery but it is located in a rather new strip center and is spic-and-span. The lady was very friendly and helpful. I tried the chicken suya (kebab) and found it was very good, very juicy and flavorful with all the spices. I also had the masa, a fermented rice cake that puffs up when fried and has a mild sour taste - very good. And I tried the lansir, the green salad which is nothing but chopped cilantro, kuli-kuli (defatted groundnut flour) and some diced tomatoes and onions. The picture on the menu looked like a moist green salad but it was quite dry owing to the groundnut flour and could have used some dressing. I thought this would be fine as a small side accompaniment to some of the plates but was a bit much as a full salad.

The words peanut and groundnut seem to be used interchangeably and groundnut flour is used a lot in the foods here (and other West African eateries) so I think if you had a peanut allergy you might need to avoid this place.

There are shakers of cayenne on the tables and toothpicks, which are used for eating some of the foods, apparently. Among the beverages offered (not listed on the menu or on the website) are Bud Lite, Heineken and Guiness plus Star Lager, a Ghanaian brew that is produced by Guiness. There were what I assumed to be bottled waters also but as I was leaving another customer was asking about the alcohol content and I learned they include Emu, a Top Palm Juice according to the label but palm wine according to the sign on the cooler door.

On a second visit I tried the jollof rice with lansir and beef suya with the masa asa side. This is only a 4 table place and I decided to get this to go. The beef was cube steak I believe and there was still a little pink in some of the pieces but the exterior was somewhat pasty from the powdered groundnut that is part of the coating. I think the chicken suya is better.

The jollof rice is made with tomatoes, tomato paste and red pepper and there was a very generous portion. I have read that West African foods can be quite spicy but I could barely detect any pepper in this dish.

On this occasion the lansir was not as dry, probably because of being moistened by a little steam closed up in the box on the way home. Lime and EVOO helped a little, especially with the passage of a little time. Maybe some more chopped tomato would be good, too, but as I expected this worked better as a side salad.

On another visit I tried the Pepper Fish Soup. Pepper soup is a staple of the region 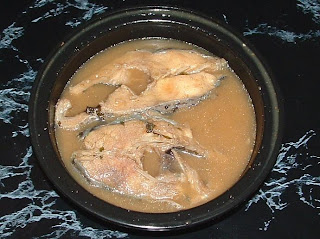 consisting of a thin, peppery broth in which various other ingredients including vegetables and meats are served. The fish choices are catfish and tilapia and they are served as steaks, not filets. I really liked the peppery broth but tilapia is a very bony fish and it was tedious dealing with all the small bones. I have since found a spice mix for this soup at Makola Imports, a Ghanaian food store on South Gessner, and have made it at home with filets.

I have also tried the shrimp suya; it proved to be very tiny shrimp, coated with the groundnut flour and with that pasty exterior but very spicy, the spiciest thing I’ve had at Suya Hut.

So far the real winners have been the chicken suya, masa (also called waina on the menu) and the pepper soup.

The website has a menu and some helpful pictures.